Here’s a quick quiz for the market history buffs out there: which central bank has been around the longest?

As a matter of fact, the Bank of England would be a far better guess, as it preceded the Federal Reserve by more than two centuries. The venerable UK institution was established in 1694 to help raise money for a naval fleet to defeat rival France. However, the Bank of England is only the second-oldest central bank.

The oldest central bank in existence is actually Sweden’s Riksbank, which began operations back in 1668, though it didn’t become an official modern central bank until an 1897 law. Now in its 347th year, the Riksbank faces a challenge it has never seen before. In addition to battling a bout of outright deflation (year-over-year CPI was -0.3% in December), the central bank must also weigh the impact of quantitative easing in two of its three biggest trading partners (the Eurozone and the UK).

Traders are split on how the Riksbank will tackle this dilemma. It already signaled that it was preparing unconventional easing measures at a recent meeting, but did not elaborate on whether these measures included negative interest rates, quantitative easing, currency intervention or some other monetary policy tool. The central bank was ahead of the curve last year, when it cut interest rates from 0.75% down to 0.00% by October, but paradoxically, Sweden’s 0% interest rate may actually look attractive compared to the negative interest rates in the Eurozone and Denmark. Therefore, the central bank may choose to cut interest rates slightly to -0.1% or -0.2% to prevent any further appreciation in the krona. Even if it doesn’t choose to cut interest rates on Thursday, the Riksbank is likely to issue a very subdued economic assessment to limit any potential appreciation in the krona.

It doesn’t get much publicity, but USDSEK has been in one of the strongest trends in the world over the past few months. Since bottoming near 6.30 in February of last year, USDSEK has moved higher in 10 of the last 11 months, consistently finding support at the 20-day moving average along the way. Just yesterday, the pair hit a nearly 6-year high above 8.40, though rates are inching lower today.

Looking to the secondary indicators though, there are some potential cracks in the bullish façade. For one, the MACD indicator has rolled over and is now trending lower beneath its signal line, showing waning bullish momentum. Meanwhile, the RSI formed a clear bearish divergence at the recent highs, raising the probability of a top.

For now, we have to give the established uptrend the benefit of the doubt, especially if the Riksbank chooses to ease on Thursday. In that case, USDSEK could find support at its 20-day MA once again and rally back to 8.40, 8.50, or higher. On the other hand, if USDSEK bears can get the fundamental catalyst they’ve been waiting for from a neutral Riksbank, USDSEK could drop below it 20-day MA back to key previous-resistance-turned-support at 8.1350.

Either way, this frequently overlooked pair should make some headlines on Thursday. 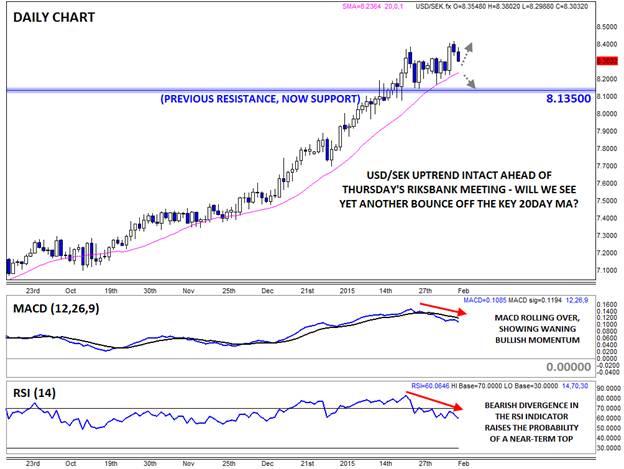