Forex Traders do sleep but markets don’t. When a trader has just woke up and logs on in Boston, another one located in Tokyo is winding down for the day, while a third one in London finishes lunch and waits for Wall Street’s opening bell. And you are maybe yourself waiting for an economic figure to be released or thinking about where to put the stop loss on your last trade.

FXStreet is your meeting place, the crossroads where you can find everything you need to make the best decisions in the currency markets. Anytime, 24/5. Based on unbiased, high quality and free information.

Our commitment is to create opportunities for professional growth for our collaborators – Banks, Educators, Independent Analysts and Brokers – and audience, from beginners to advance… You!

Forex is global, and so is FXStreet

While head-quartered in Barcelona where our enthusiastic 25 people core teamwork, the website would not be what it is without its 30 co-workers around the world, who help cover the markets 24/5 and in different languages.

Our main website is in English, but it is also available in 16 other languages (Spanish, Japanese, simplified and traditional Chinese, Russian, Arabic, Indonesian, French, Italian, Turkish, Vietnamese, German, Hungarian, Portuguese, Korean and Catalan).

Our Mission, Vision and Values

FXStreet is the leading provider of information and resources for Forex traders. Created in the year 2000, FXStreet offers tools to help traders take more informed decisions when entering the market, through an objective view of the market.

Create opportunities of professional growth for our audience, from beginners to advanced Forex traders, and for our collaborators and partners (banks, educators, independent analysts, data providers and brokers).

We deliver the most advanced information and tools such as rates and charts, market analysis, forex news, economic calendar or webinars together with a wide variety of sources of information for traders to access the market in a conscious way.

Be the industry leader provider of information and resources for Forex traders providing an objective view of the markets.

TEAMWORK
Together we can achieve more

INNOVATION
We never stop trying to find ways to create

FEEDBACK
We rely on feedback to find ways to improve

From the first days of FXStreet back in 2000 until today, our website and company have expanded in size, content, services and languages. We are now around 30 people in the Barcelona office. Outside of Barcelona and all around the world, approximately 30 collaborators work with us as news editors, trading session leaders, advisers, translators and content assistants. FXStreet is a website visited by over 1 million users nowadays, traders who look for insightful information to make the best decisions in their daily activities.

The FXStreet success story begins in Barcelona, back in 2000, in a man’s mind who, in the first years of his professional career, was working in an emerging and promising market, Forex, producing information for a Spanish website. He lived in a country where, especially in those days, FX trading was practically unknown, but he gave birth to an adventurous project: creating an international FX website in English, the first of its kind, with information and tools for currencies traders.

His name is Francesc Riverola. He puts the idea together with his partners and companions – Miriam Pinatell (his wife) and Sergi Fernández – and the three of them build the prehistorical version of FXStreet. Miriam is the web designer, Francesc is in charge of advertisement and content and Setxi is the web developer. They are still the partners (“socios”) of the company nowadays.

Let’s review the main milestones of our history.

The FXStreet story begins in Barcelona, back in 2000, in a man’s mind who, in the first years of his professional career, was working in an emerging and promising market, Forex, producing information for a Spanish website. He lived in a country where, especially in those days, FX trading was practically unknown -it’s still the case-, but he gave birth to an adventurous project: creating an international FX website in English, the first of its kind, with information and tools for currencies traders.

His name is Francesc Riverola. He puts the idea together with his partners and companions – Miriam Pinatell (his wife) and Sergi Fernández – and the three of them build the prehistorical version of FXStreet. Miriam is the web designer, Francesc is in charge of advertisement and content and Setxi is the web developer. They are still the partners (“socios”) of the company nowadays.

The first version of the website already has some of the most popular sections that it contains nowadays: Charts, News and Quotes (Rates in the current version). The web segment for FX brokers is also there, in its primitive form, as well as some of the content you can also find in today’s site, like reports from banks and brokers.

In 2003, the company hires its first employee, Sandra García, who is still nowadays working with us, she’s the longest serving member of the FXStreet team! They all move to an office in Barcelona’s “Gracia” neighbourhood and more people join the team. The first website staff is made of 7 workers.

The website changes its format and updates its design, structure and content; the Spanish and Chinese versions are launched.

That year we launch sections of the website that today are very well known and broadly used as the “Q&A Sessions” – now webinars – or the “Upcoming Economic Events” – now Economic Calendar. We also refresh the design and content structure of the Spanish and Chinese versions of FXStreet.

At the end of 2005 we create the Premium Service, the exclusive content website offering Reuters news, Premium webinars, banks reports and charting software. Nowadays, this website does not exist anymore. The only part that has survived from that page are the Premium webinars.

2006: The Year of Living Dangerously

During the summer of 2006, the 2.0 version of our website is released. We spend the first half of the year rethinking the whole web structure. In those days we create the subhomes structure with new sections as Fundamental, Technical and Live (that all disappeared in July 2013).

In 2006, we move to a new office, the one where we still are today, in Carrer Portaferrissa, near Las Ramblas, in the very centre of the Catalan capital. The team grows and counts around 20 people back then.

FXStreet is made up of a team of approximately 60 people, 30 of them working from the head office in Barcelona. The rest of the staff is working from around the world: USA, Argentina, Indonesia, the UK or Russia, just to name a few. The multidisciplinary and multicultural team is at the image of the Forex Market: diverse, global and active around the clock. We’re presenting you here the Management Team.

The 3 of them created FXStreet in 2000. In the beginning, Miriam was the designer, Setxi the programmer and Francesc were in charge of advertising and content. Along the years, the company grew and the team too, made today of 50 members.

Miriam, Francesc and Setxi are now part of the Board of Directors, where they define the company’s strategy.

Co-founder of FXStreet, Setxi Fernandez was initially taking care of the website development. He then naturally became head of the IT department when the company started to grow and subsequently Chief Operating Officer. In May 2017, he is appointed as CEO.

Pere Monguió studied Advertisement and Public Relations at the Universitat Autònoma de Barcelona. He joined the FXStreet team in 2010 as editor and performed as Research Manager before taking the responsibility of leading the Content Department in July 2013.

Javier Hertfelder studied Software Engineer at San Pablo CEU University of Madrid. He worked in startups and multinational companies bringing agile methodologies to the development teams before he joined the FXStreet team in September 2014 taking the responsibility of leading the IT Department. in July 2013.

Sergi López studied English at the Universitat de Barcelona. After assuming different leading roles in various areas of work, he landed on his first Marketing job 15 years ago. Since then he has been working on both offline and especially online Marketing in several multinationals, leading large teams and working on creation, monetization, conversion and optimization of sites and apps. In October 2014 he joined FXStreet as CMO.

Ricardo Javier Romero is an Economist, who studied at the University of Barcelona and has specific degrees in financial advisory and tax consultancy. He works as an Accounting and Marketing teacher and as a strategic and financial advisor to different companies. He is specialized in the promotion of financial sustainability, controlled growth, and optimal people management. Working as an advisor for FXStreet since 2009, he’s named Chief Financial Officer in May 2017.

Curious to know where and how is our Barcelona’s office like? We have a few pictures for you!

As many of you probably know, FXStreet is a company based in Barcelona. At its beginnings, the company’s office was located in the Gracia neighbourhood (Upper side of the city). Since 2006, we are in a small pedestrian street that goes from the famous Ramblas to the Gothic Cathedral. Our office is on the second floor of a beautiful palace called “Palau Palmerola“, located in Portaferrissa, 7-9. This building preserves remains of the XVIII century and was rebuilt in 1857.

Here are pictures of our workplace. It’s charming and very pleasant, have a look! 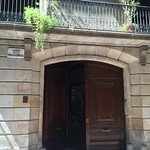