GBP/USD tested the lower limit of the ascending regression channel after the disappointing Retail Sales data but this level stays intact for the time being. Additionally, the Relative Strength Index (RSI) indicator on the four-hour chart is edging higher toward 60, suggesting that sellers are struggling to retain control.

In case the pair breaks below 1.3780 (trend support) and makes a daily close there, the technical outlook could turn bearish. In case that happens, a slide toward 1.3760 (static level) and 1.3700 (psychological level, 200-period SMA) could be witnessed.

The British pound has started the last day of the week on the back foot pressured by the disappointing Retail Sales data from the UK, which showed a contraction of 0.2% in September vs the market expectation for an increase of 0.5%. Nevertheless, the upbeat October PMI figures seem to be helping the GBP stay resilient against the dollar.

IHS Markit reported on Friday that the economic activity in the UK's private expanded at a stronger pace in early October than it did in September with the Manufacturing PMI and the Services PMI improving to 57.7 and 58, respectively.

More importantly, the survey's underlying details regarding price pressures seem to be playing into the hands of the Bank of England's rate hike prospects.

Commenting on the findings, Chris Williamson, Chief Business Economist at IHS Markit, said that growth is accompanied by an unprecedented increase in inflationary pressures. "The record readings of the PMI survey’s price gauges will inevitably pour further fuel on these inflation worries and add to the case for higher interest rates."

On Brexit-related developments, British Prime Minister Boris Johnson is reportedly ready to compromise on the European Court of Justice's role in interpreting the application of the EU law in Northern Ireland.

Meanwhile, the risk-on market atmosphere is not allowing the dollar to continue to gather strength ahead of the weekend.

After snapping a six-day losing streak on Thursday, the US Dollar Index is staying in the negative territory below 93.60 as investors remain hopeful for an agreement on US President Joe Biden's spending bill.

Under current circumstances, the fundamental outlook supports the bullish view in the near term.

Interested in weekly GBPUSD forecasts? Our experts make weekly updates forecasting the next possible moves of the pound-dollar pair. Here you can find the most recent forecast by our market experts:

GBP/USD: Time for a meaningful downside correction? Covid and US GDP eyed Premium 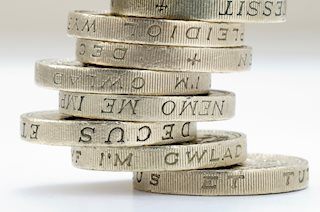 A rate hike in the UK? Speculation has been pushing the pound higher, and the topic will likely remain a major market mover for sterling ahead of Halloween. US growth figures stand out in a packed US economic calendar.

USD/JPY struggled to preserve/capitalize on its modest intraday gains on Friday. A subdued USD price action turned out to be a key factor that capped the upside. Signs of stability in the equity markets, elevated US bond yields extended support.

Gold gained traction for the fourth successive day and shot above $1,800 in the early American session, reaching its highest level since early September. Falling US T-bond yields and dollar weakness fuel XAU/USD's upside ahead of the weekend.

WTI fades late Thursday’s bounce off $80.60, following its U-turn from a seven-year high, during Friday’s Asian session. That said, the quote drops back to $82.00 by the press time. The black gold tracks a nearby descending trend line, coupled with a falling Momentum line, to suggest further weakness.

How could GBPUSD move this year? Our experts make a GBPUSD update forecasting the possible moves of the pound-dollar pair during the whole year. Don't miss our 2021 GBPUSD forecast!

In the GBPUSD Price Forecast 2021, our dedicated contributors expect a continuation of the bullish trend during the year. By the end of 2020, the average price for the pair is 1.3733. Read more details about the forecast.

MOST INFLUENTIAL POLITICAL EVENTS IN 2021 FOR GBPUSD

Number one political event in 2021 for the pound to US dollar pair is still being Brexit. Trump, Biden's new government and covid will be key too. These clouds are set to clear at various paces, making way for rapid changes and new challenges. Economic figures will likely be the arbiter of Brexit dampening effect, the UK’s high readiness for receiving the vaccine and other factors. The changing relationship between governments and central banks will likely be in focus.

Influential Institutions & People for the GBPUSD

The Pound VS Dollar can be seriously affected by news or the decisions taken by two main central banks:

The Bank of England (BoE)

The Bank of England is the central bank of the United Kingdom. Established in 1694 and privately owned in the beginning, the Bank was nationalised in 1946 so now is completely owned by the UK government. BOE's main reason to be is to maintain monetary and financial stability in the country. Some of its other tasks are producing secure bank notes, operating asset purchase facility and keeping the inflation low and stable. The bank is overseen by the Court, named used to reffer the board of directors, and is accountable to Parliament and the public.

On the other we found The Federal Reserve System (Fed) wich is the central banking system of the United States. Fed has two main targets: to keep unemployment rate to their lowest possible levels and inflation around 2%. The Federal Reserve System's structure is composed of the presidentially appointed Board of Governors, partially presidentially appointed Federal Open Market Committee (FOMC). The FOMC organizes 8 meetings in a year and reviews economic and financial conditions. determines the appropriate stance of monetary policy and assesses the risks to its long-run goals of price stability and sustainable economic growth.

Andrew Bailey is Governor of the Bank of England since 16 March 2020. He was announced as the new Governor of the BoE on 20 December 2019. Bailey was born in Leicester in 1959 and graduated from Queens' College with a BA in History and a PhD from the Faculty of History, University of Cambridge in 1985. Before becoming the Governor of the BOE, Andrew worked at the Bank in a number of areas, most recently as Executive Director for Banking Services and Chief Cashier, as well as Head of the Bank's Special Resolution Unit (SRU). Previous roles include Governor's Private Secretary, and Head of the International Economic Analysis Division in Monetary Analysis.

Bailey on BOE'S Profile and Wikipedia

Jerome Powell took office as chairman of the Board of Governors of the Federal Reserve System in February 2018, for a four-year term ending in February 2022. His term as a member of the Board of Governors will expire January 31, 2028. Born in Washington D.C., he received a bachelor’s degree in politics from Princeton University in 1975 and earned a law degree from Georgetown University in 1979. Powell served as an assistant secretary and as undersecretary of the Treasury under President George H.W. Bush. He also worked as a lawyer and investment banker in New York City. From 1997 through 2005, Powell was a partner at The Carlyle Group.

The GBPUSD (or Pound Dollar) currency pair belongs to the group of 'Majors', a way to mention the most important pairs in the world. The pair is also called 'The Cable', referring to the first Transatlantic cable that was crossing the Atlantic Ocean in order to connect Great Britain with the United States of America. This term originated in the mid-19th century, which makes it one of the oldest currency pairs.

Pound Dollar represents two economies: British and American (from United States of America). The Cable is a closely watched and widely traded currency pair where the Pound is the base currency and the US Dollar is the counter currency. For that reason, all the macroeconomic data related to the US and the UK affects the price of this pair. One of the events which affected most the volatility of the pound vs. dollar was Brexit.

The EUR/USD (or Euro Dollar) currency pair belongs to the group of 'Majors', a way to mention the most important pairs in the world. This group also includes the following currency pairs: GBP/USD, USD/JPY, AUD/USD, USD/CHF, NZD/USD and USD/CAD. The popularity of Euro Dollar is due to the fact that it gathers two main economies: the European and American (from United States of America) ones. This is a widely traded currency pair where the Euro is the base currency and the US Dollar is the counter currency. Since the EUR/USD pair consists of more than half of all the trading volume worldwide in the Forex Market, it is almost impossible for a gap to appear, let alone a consequent breakaway gap in the opposite direction.

Normally, the EUR/USD is very quiet during the Asian session because economic data that affects the fundamentals of those currencies is released in either the European or U.S. session. Once traders in Europe get to their desks a flurry of activity hits the tape as they start filling customer orders and jockey for positions. At noon activity slows down as traders step out for lunch and then picks back up again as the U.S. comes online.

The USD/JPY (or US Dollar Japanese Yen) currency pair belongs to the group of 'Majors', a way to mention the most important pairs in the world. This group also includes the following currency pairs: EUR/USD, GBP/USD, AUD/USD, USD/CHF, NZD/USD and USD/CAD. Japanese Yen has a low interest rate and is normally used in carry trades. This is the reason why is one of the most trades currencies worldwide. In the USD/JPY the US Dollar is the base currency and the Japanese Yen is the counter currency. The pair represents American (from United States of America) and Japanese economies.

Trading the USD/JPY currency pair is also known as trading the "ninja" or the "gopher", although this last name is more frequently used when referred to the GBP/JPY currency pair. The US Dollar Japanese Yen usually has a positive correlation with the following two pairs: USD/CHF and USD/CAD. The nature of this correlation is due to the fact that both currency pairs also use the US Dollar as the base currency, such as USD/JPY. The value of the pair tends to be affected when the two main central banks of each country, the Bank of Japan (BoJ) and the Federal Reserve Bank (Fed), face serious interest rate differential.