After rising to 115.52 on Wednesday, the highest for the USD/JPY since January 2017, largely in response to the release of US inflation and consumer spending data, the pair plunged 1.8% in thin Friday trading on renewed risk aversion from a new COVID variant in South Africa and better than forecast Tokyo inflation figures.

The Dollar-yen * had reached it’s top when American PCE and Personal Spending figures for October proved much stronger than expected.

South African health authorities reported a new variant of the pandemic with multiple mutations of unknown importance. The yen’s safety status combined with the limited liquidity of the New York market, where the day after Thanksgiving is an unofficial holiday, made profit-taking opportunities irresistible.

The USD/JPY's steep 5.6% climb since late September had been due to the market’s evolving view of Federal Reserve monetary policy. Inflation has grabbed public attention and the bankers are expected to respond with an accelerated taper program and rate hikes in the second half of next year.

Inflation and consumer spending are the two pillars of Federal Reserve monetary policy. The first as motivation, the second as permission.

Each proved to be much stronger than forecast in October. The Core Personal Consumption Expenditure Price Index -- core PCE for short -- the Fed’s anointed inflation measure, registered 4.1% (YoY), well above the 3.7% prediction and the highest annual rate since January 1991. The headline PCE rate soared 5%, the fastest gain since November 1990.

Personal Spending, a broader gauge of consumption than Retail Sales, rose 1.3% from 0.6% in September. Excluding the stimulus fueled months of January and March this year, it was the best score since July 2020.

The Fed initiated the withdrawal from its monthly $120 billion bond purchases at its November 3 meeting. A reduction of $15 billion is scheduled for November and December, with continuing subtractions expected until the program is eliminated in June.

Accelerating inflation makes the need for higher US interest rates plain. Core PCE has nearly tripled this year from 1.5% in January, and the overall rate has soared 3.5 times from 1.4%.

Manufacturing costs are also rocketing, guaranteeing that yet higher prices will be passed onto consumers. The Producer Price index jumped 8.6% in October, its highest level in 13 years.

Economic growth fell sharply in the third quarter to 2.1% from 6.5% in the first half of the year. If expansion continued at that pace in the fourth quarter the Fed governors might be hard pressed to justify higher interest rates despite the inflationary surge.

The Federal Open Market Committee (FOMC) does not want to be forced to choose between curbing inflation and growth.

Fortunately for the bankers, the American consumer is ignoring inflation and spending at levels that should keep the economy humming through to the end of the year. The latest  Atlanta Fed GDPNow estimate for the final three months of the year is 8.6%. If accurate, that would provide 5.9% growth for the year.

Japanese outlook statistics failed to improve in the final month of the third quarter with the Coincident and Leading Economic Indexes falling from their August readings. Tokyo CPI, a leading indicator for national price changes, was stronger than forecast in November at 0.5% (YoY) with only the core rate deflationary at -0.3% (YoY).

Even with the improvement in CPI, the Bank of Japan (BOJ) and the new administration of Prime Minister Fumio Kishida will proceed with their monetary accommodation and fiscal stimulus plans.

In addition to the Personal Spending and PCE data discussed above, several other US statistics reported a healthy economy. Initial Jobless Claims dropped to 199,000 in the week of November 19, far below the 260,000 forecast and the lowest number since November 1969. Even in the heady expansion of late 2019 and early 2020 the lowest reading was 201,000 in the week of January 31. Personal Income, a wider gauge of family finances than Average Hourly Earnings, that includes transfer payments, interest income and other non-salary items, rose 0.5% in October, more than twice its 0.2% forecast and a reversal of the 1% September decrease. Wholesale Inventories rose 2.2% in October, up from 1.4% in September, and one reason for the rising GDP estimates for the fourth quarter.

The chief factor in the US dollar's ascent against the yen has been the rising expectations that the Federal Reserve will embark on a series of rate hikes in the second half of next year.

That expectation decreased on Friday as the Fed funds futures pulled back from predicting three 0.25% increases by next December to two. 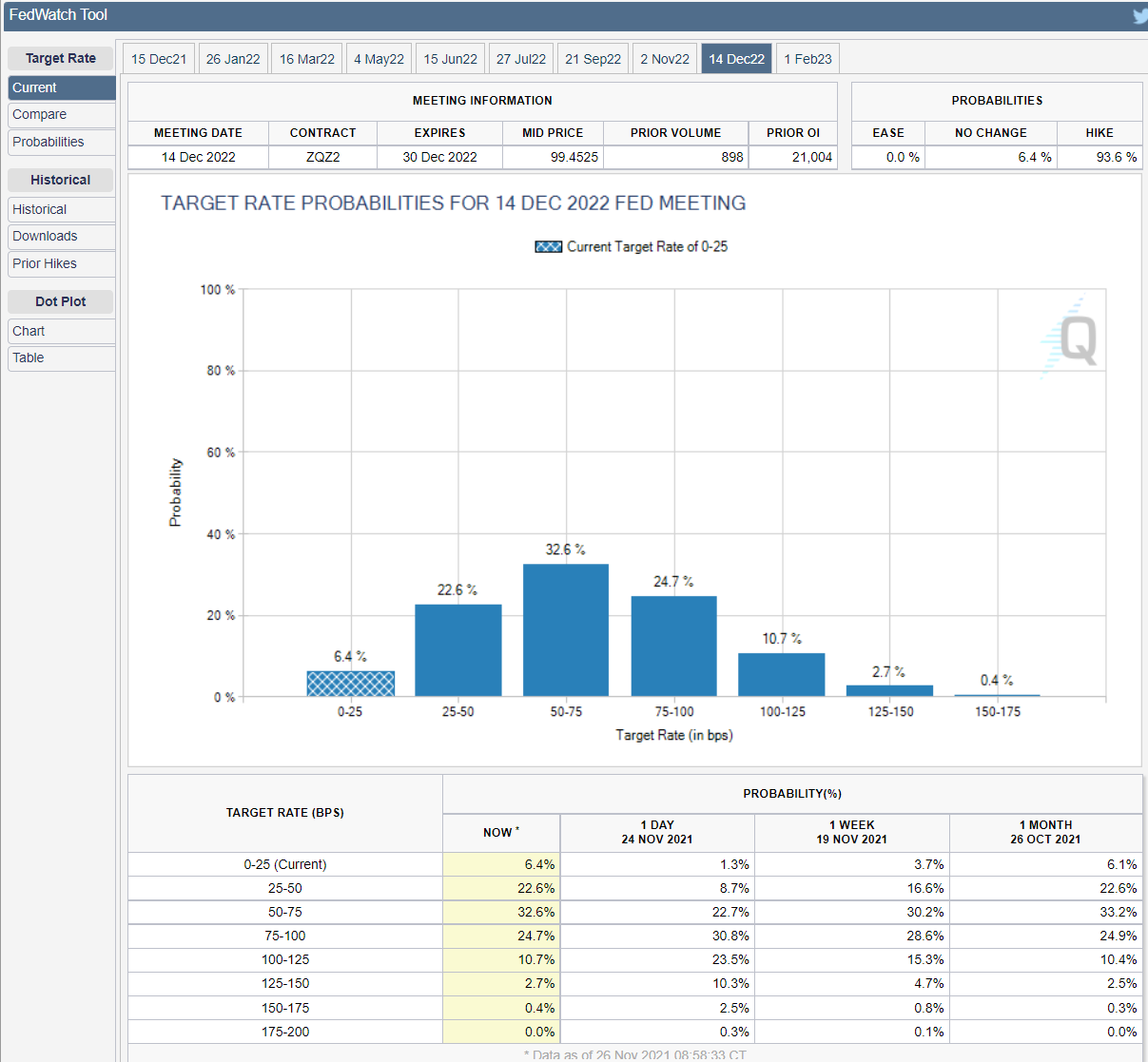 The Fed’s own Projection Materials posited just one increase in their September version. The update due at the December 15 FOMC will likely move to two hikes in 2022. The Fed and the BOJ are moving in diametrically opposed directions on rate policy.

*Dollar yen is a currency market term for the USD/JPY.

Diverging central bank rate policy in the US and Japan is the prime motive for the currency markets. The contrast reflects the growth difference between the two economies and the striking directionals of inflation.

The speculation that US rate policy is about to shift was given backing in the minutes of the November 3 FOMC meeting released on Wednesday. The summary noted that bank officials were concerned about inflation and would be willing to  raise interest rates “sooner than participants currently anticipated”, with some advocating a more aggressive tapering program.

The reappointment of Jerome Powell as Federal Reserve Chair was another plus for the dollar. His competitor for the post, now Vice-Chair, Lael Brainard, was viewed by markets as a bit more accommodating, though there is little reason to doubt that in practice her policies would have been nearly identical.

Historically, central bank interest rates are the primary indicator for currency direction. Treasury rates in the US have not yet moved above their 2021 high. The 10-year yield was about 10 basis points below the March 31 top of 1.746% at Wednesday's market close. That has slipped back to nearly 25 basis points in Friday trading.

Japanese data on Retail Trade (sales) for September and Industrial Production for October due next week will not move markets.

In the US, Nonfarm Payrolls have the potential to send the dollar and interest rates higher. The relationship is linear: better payrolls, higher Treasury yields and the dollar. Purchasing Managers’ Indexes for the manufacturing and services sectors will also provide the greenback with support if they show an accelerating US economy.

The emergence of the South African variant is an unknown factor in the market picture, which, if it provokes restrictive measures, could upend economic and rate predictions globally.

The immediate bias for the USD/JPY is higher from Friday’s plunge as the COVID picture gains clarity and the markets resume normal liquidity..

Friday's COVID and liquidity enabled panic sell-off in the USD/JPYwas the largest one day fall in the pair since the 2% collapse on January 2, 2019, another thin market plunge that reversed in the subsequent two weeks. In the pandemic annals only the 1.4% fall on March 26, 2020 and the 1.5% drop the next day come close to the magnitude of Friday's free-fall.

Thursday's close at 115.36 was nearly a five-year high in the USD/JPY and the end point of a rapid 5.6% ascent over the past two months. That extended position ensured stop-loss order positioning at all important levels beneath Friday's opening. Once the market began moving in Tokyo traders knew that the building global market panic would drive stop execution as the USD/JPY descended and that with New York liquidity limited and no following market, the down-draft pressure would be irreversible. The 15-minute chart shows the support levels on the way down. Each was overwhelmed, likely as much by defensive selling as by direct order execution.

The Friday plummet not surprisingly reversed both the MACD (Moving Average Convergence Divergence) and the Relative Strength Index (RSI). The fundamental nature of the change is reflected in but was not predicted by either technical indicator. The sell signals generated by these indicators are conditional on the news development, in this case the South African variant. For instance, if in the next few days, health authorities discovered that the variant is little different in effect and is subject to the vaccine, the MACD and RSI would swiftly reverse. Traders should be wary of technical signals in these circumstances.

The extreme defensive selling in all markets makes them susceptible to a rebound when markets open on Monday. Even the slightest positive news on the South African variant would likely trigger a partial recovery.

The 50-day moving average (MA) matched the 38.2% Fibonacci level of the September to November USD/JPY and provided a convenient turning point for the day's selling. The 21-day MA at 114.12 had briefly established a support line earlier in the day. The 100-day MA at 111.50 could become important if markets do not reverse next week.

The technical extension observed in the FXStreet Forecast Poll, which predates Friday's market, was fulfilled in dramatic fashion. Movement in the USD/JPY in the week ahead will turn on viral news.