Have the fires been extinguished? The kicking of the debt ceiling issue down the road and some ease in energy costs have allowed GBP/USD to recover – and it now faces critical US consumer data, UK jobs, and probably additional worries about supply chain issues.

This week in GBP/USD: Energy crunch and debt ceiling in focus

Taper doubts? The US economy gained only 194,000 jobs in September, far worse than expected. However, significant upward revisions and soft gains in leisure and hospitality – related to the spread of the Delta covid variant – make the data look better. The dollar declined, but this may be short-lived as the Federal Reserve will likely stick to its taper plan. The NFP is good enough.

Debt ceiling delayed: Two weeks before a potential US default, Republicans agreed to push back the deadline for hitting the debt ceiling through early December. While the issue will return to haunt lawmakers and markets, this postponement improved the atmosphere and weighed on the safe-haven dollar.

Evaporating gas: Natural gas prices extended their meteoric surge amid fears of drying inventories even before temperatures began dropping. However, after Russia pledged to enlarge shipments to Europe, costs fell and the mood improved. Some suspect that Russian President Vladimir Putin is trying to pressure Germany to give the green light to the controversial Nord Stream 2 pipeline, which circumvents Ukraine. The crisis directly impacts Britain.

Brexit: The UK and France clashed over fishing rights, a minuscule industry, while London and Brussels continued tussling over the Northern Irish protocol. The leftovers from Britain's EU exit remain an issue for the pound.

Coronavirus cases remain elevated in Britain in comparison to its peers. The topic has been on the backburner but could return as winter arrives. 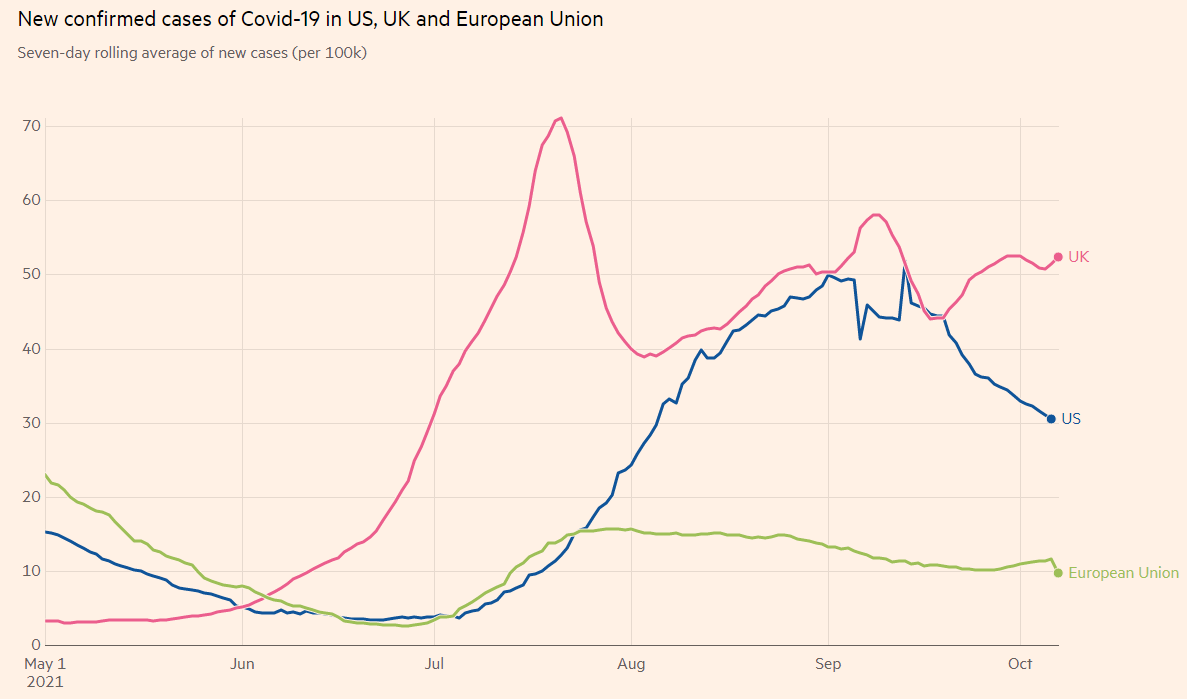 Overall, the easing of several tensions allowed the dollar to fall and cable to climb – despite various British issues.

Where next for natural gas prices? If they resume their rise, the pound will suffer amid fears that Brits will have less money in their pockets and the greenback would benefit from safe-haven flows. If costs climb down from the skies, GBP/USD could rise.

The crisis in UK petrol stations is set to subside, disappearing from the list of worries. However, other Brexit-related issues could gain more prominence as trust between France and Britain is at a low point, and German politicians are focused on cobbling coalitions. EU talk of legal action related to the Northern Irish protocol or British insistence to ditch the accord could keep the pound under pressure.

The highlight of the UK economic calendar is the jobs report. Economists expect no change in the Unemployment Rate – 4.6%, once again in August. Wage growth is forecast to remain at elevated levels, reflecting a bustling job market. The Claimant Count Change, aka jobless claims, has likely continued falling in September.

Another upbeat labor report could boost the pound on expectations that the Bank of England would raise rates sooner than later.

Monthly growth figures for August are also set to move markets. Investors will want to see how the economy is doing as the dust settles from the rapid recovery and amid fears of a slowdown. Updated data on industrial output is also of interest.

US events: Focus on consumers and the prices they pay

The Sword of Damocles – the danger of default – has been removed, for now, leaving room for Democrats to continue sorting out how they advance President Joe Biden's agenda. Centrists such as Senators Joe Manchin and Kirsten Sinema could be willing to accept a spending bill of roughly $2.2 trillion.

Will more leftist lawmakers agree to climb down from $3.5 trillion. Investors remain optimistic that politicians will compromise. Positive headlines from Washington are set to improve the mood and weigh on the safe-haven dollar, while news of a deadlock could weigh on sentiment.

Inflation worries remain central to the market’s thinking, and new Consumer Price Index figures for September will be closely watched. Core CPI surprisingly dropped to 4% in August, cooling the dollar – but that was insufficient to halt the Federal Reserve from signaling upcoming tightening. The bank remains on course to announce the tapering of its $120 billion/month bond-buying scheme in early November.

A drop of underlying inflation under 4% would hit the dollar temporarily but is unlikely to derail the Fed. Core CPI peaked at 4.5%. A return to higher levels could send the greenback higher on expectations for an accelerated tightening timeline.

Do higher prices deter US consumers? Retail sales figures for August were surprisingly strong, defying downbeat consumer sentiment. However, economists expect a drop in both headline and core sales figures in September. Pandemic-era federal unemployment benefits ended last month, and that could have pushed consumption down. Signs that inflation is halting shoppers would worry investors, while ongoing growth would be positive.

The University of Michigan's preliminary Consumer Sentiment Index for October has the last word of the week, and a moderate increase is on the cards. It is essential to note that the indicator has lost some of its clout. 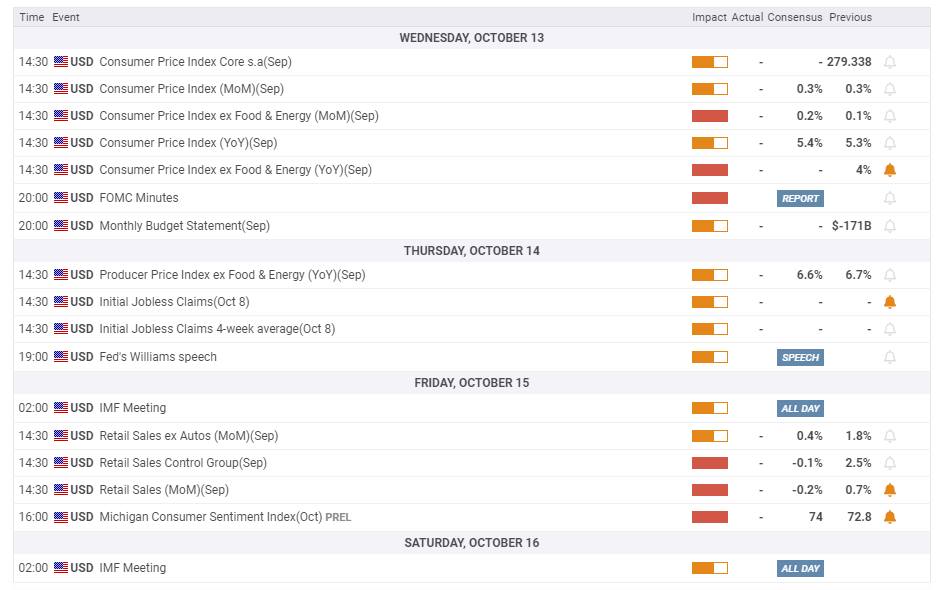 Pound/dollar has been trading under a downtrend resistance line and suffers from downside momentum on the daily chart. After the 50-day Simple Moving Average (SMA) broke below the 200-day SMA – the "Death Cross" pattern – a month ago, the 100-day SMA is also set to pierce the 200-day SMA. That would add to the bearish sentiment. Moreover, the Relative Strength Index (RSI) is well above 30, thus far from oversold conditions.

All in all, bears are in control.

Fears of inflation and tighter monetary policy are set to push the safe-haven dollar higher.

The FXStreet Forecast Poll is showing that investors foresee some erosion of the most recent gains in the upcoming week, but rises afterward – despite downgrades to these longer-term outlooks. It is essential to note that the recent choppiness has impacted the range of forecasts, which is wider than in previous months. 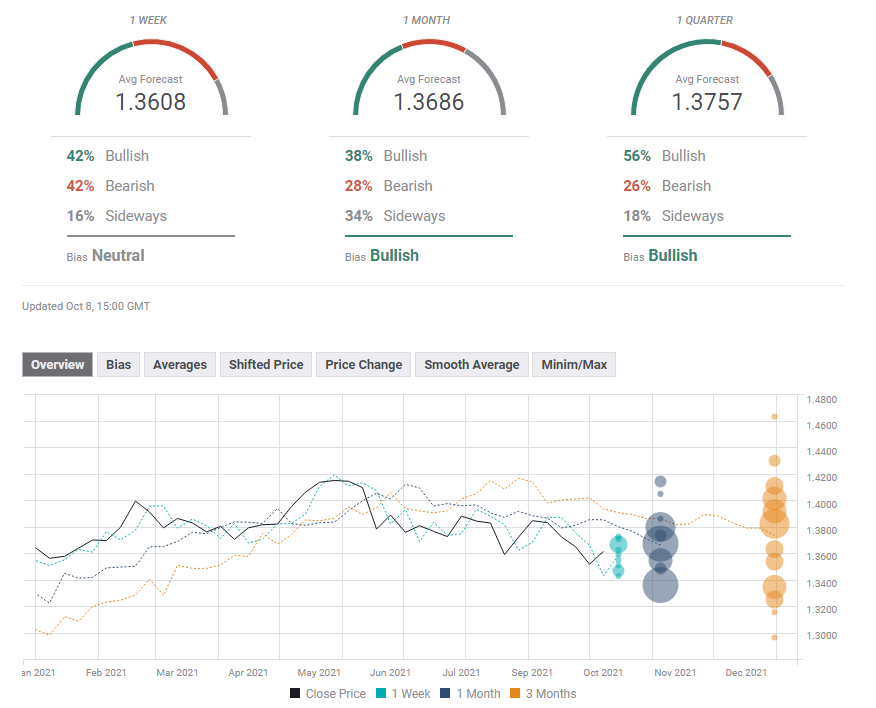 EUR/USD remains under pressure below 1.1600, as the US dollar extends the late Wednesday bids amid broad risk-aversion. Traders turn cautious amid stagflation fears and ahead of Thursday's ECB policy decision and the US Q3 GDP release.