No tapering for now – the Fed's dovish message has weighed on the dollar, but British issues have limited sterling's ability to rise. Will bears or bulls take the lead? New forecasts from the BOE and another potential blockbuster US jobs report stand out as a new month begins.

This week in GBP/USD: Goldilocks Fed, but not for sterling

Fed fires dollars on cylinders: The world's most powerful central bank acknowledges America's fast recovery but continues seeing rising inflation as only "transitory." More importantly, the bank is set to continue buying bonds at its elevated pace of $120 billion/month for the foreseeable future – a move that keeps stocks happy and the dollar down.

Jerome Powell, Chair of the Federal Reserve, insisted that inflation results from known base effects and bottlenecks, also temporary in nature. He also repeated the mantra that the Fed would only act after seeing "substantial further progress." At this time, the economy "has a long way to go," according to the Fed Chair.

US Gross Domestic Product figures cast some doubts on that notion. At the same time, output grew by 6.4% annualized, as expected, the surge in consumption, rise in investment and drop in inventories all point to an even faster expansion down the line.

One of the main reasons for robust US growth comes from fiscal policy – President Joe Biden's COVID-19 relief plan worth $1.9 trillion. While his $2.25 trillion infrastructure program is still making its way through Congress, the Commander-in-Chief presented another package worth $1.8 trillion.

Contrary to the first boost and similar to the second one, the administration plans tax hikes. So far, markets have shrugged such business-unfriendly news off. The news is partially priced in, and investors probably doubt that lawmakers in Washington would realize Biden's full ambitions.

Coronavirus cases have extended their downtrend on both sides of the Atlantic. The UK reached over 50% of its population with at least one jab, a feat that allows further reopening – including an experimental event at a disco. Infections in the US have also turned down after a moderate wave early in April. 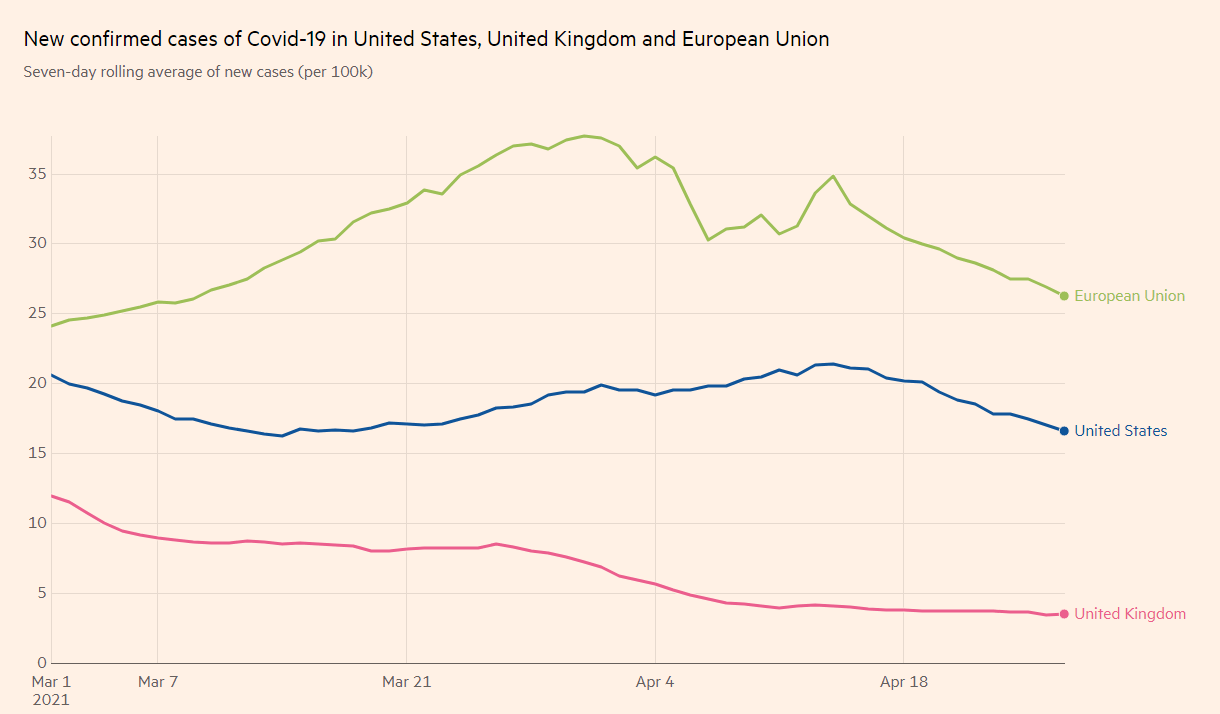 Nevertheless, Britain's immunization achievements are already in the price, while new and old political issues have come to haunt the pound. Prime Minister Boris Johnson has been under fire for asking Conservative Party donors to fund the renovation at his Downing Street residence. Allegations that he preferred seeing "bodies pile in the streets" over forcing another lockdown have also hurt his standing.

Another issue is Brexit, which refuses to die. Arlene Foster, leader of the Northern Irish Democratic Unionist Party (DUP), announced she would step down. Her resignation is another sign of the crisis around the NI protocol, which has suffered a deadlock in EU-UK negotiations. Resolving issues related to the services sector remains an open issue as well.

All in all, dollar weakness allowed GBP/USD to rise, but gains were limited.

Will the PM's scandals fade away like previous ones? If the government struggles with political issues, it will find less time to manage the recovery. Brexit developments are also eyed, with a potential burst of violence in Belfast never far from sight.

On the other hand, Britain's vaccination campaign is set to gain further steam as the "dry month" of April comes to an end. An acceleration could boost sterling, while any unlikely uptick in cases – potentially due to variants – would pummel the pound. 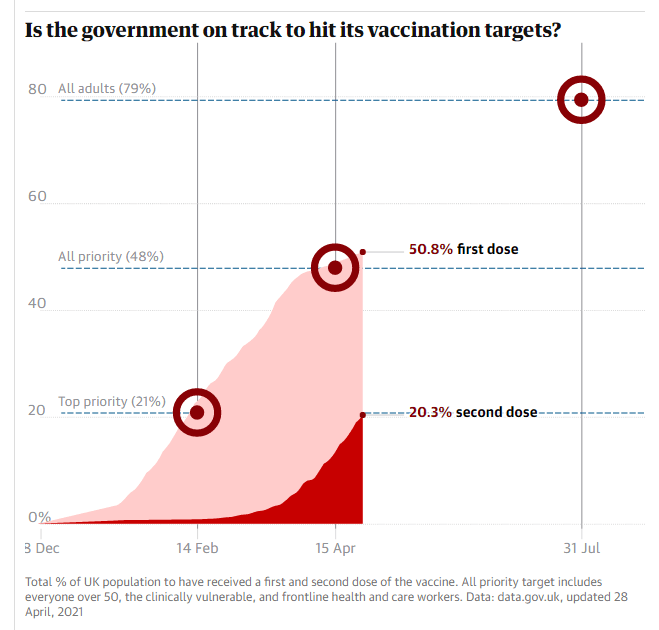 The Bank of England's "Super Thursday" decision is left, right and center on the economic calendar. Contrary to the previous event, the BOE publishes its quarterly Monetary Policy Report, including new growth and inflation forecasts. Moreover, BOE Governor Andrew Bailey and his colleagues could also use the opportunity to offer hints about future policy.

The bank is set to maintain its £895 billion Quantitative Easing program unchanged, and expanding it seems unlikely now that the government can fund itself more easily. What about the interest rate? After flirting with the idea of setting negative borrowing costs, Bailey clarified it remains a distinct possibility.

The BOE is likely to lay out an optimistic path for Britain's recovery during the next few quarters after the economy has shown resilience during the harsh winter months and as everything returns to normal. Does this mean raising rates? That is highly unlikely, as UK inflation remains weak.

Moreover, after the Fed dismissed rising prices as a transitory effect and wants to keep the pedal to the metal, there is no reason for the BOE to step forward. All in all, there is a good chance that Bailey and Co. acknowledge the recovery but stress that tightening is not on the cards.

The UK economic calendar also features Markit's final Purchasing Managers' Indexes for April, but they will likely play second fiddle to the BOE.

Since Johnson & Johnson's vaccines were suspended – though later reinstated – America's immunization pace has slowed down. It peaked at 3.3 million and has dropped to 2.67 million doses per day. Is this a reason to worry? Over 43% of the population has received at least one jab, causing cases, hospitalizations and deaths to fall sharply.

While New York City and other places are accelerating their reopening, the inoculations' chart remains relevant for traders. 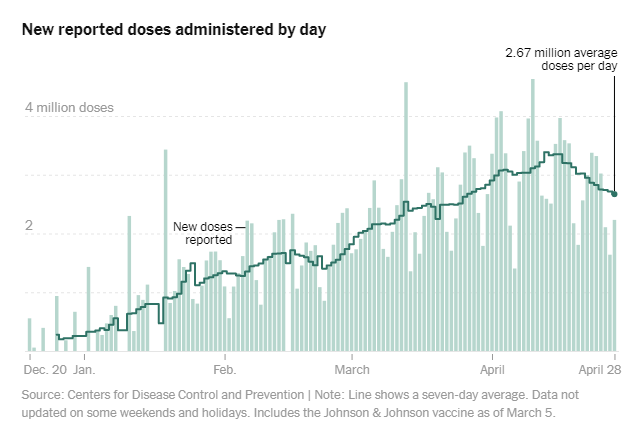 President Joe Biden has some $4 trillion in spending and tax plans in the pipeline. How much of these ideas will get over the line? The White House and Congress are deliberating these significant changes to the US economy, but markets are shrugging it off, perhaps assuming that little will get done. Like vaccinations, this story is on the backburner but could burst into the spotlight at any point.

The focus will undoubtedly be on economic figures, especially on Friday with April's Nonfarm Payrolls publication. A full buildup awaits traders during the week. The first hint comes from the ISM Manufacturing Purchasers' Managers' Index, which will likely hold up at high ground around March's 64.9 level. The employment component is critical for the NFP.

ADP's labor market figures are forecast to show a faster creation of private-sector jobs and cause jitters in markets. However, it is essential to note that America's largest payroll company's figures have not been well-correlated with official statistics. Wednesday's second release is of higher importance.

The ISM Services PMI is the last and perhaps most important signal as most Americans work there. The calendar is pointing to further gains beyond March's 63.7 – an all-time high. The employment component is central, and so is the Prices Paid one, amid concerns of rising inflation.

Thursday's weekly jobless claims for the week ending April 30 are out of the NFP's scope but could affect traders' mindset as tension mounts toward Friday.

Finally, April's job figures are here. At the same time, the calendar is pointing to an increase of 925,000 – a superb gain in pre-pandemic standards – some project an even faster increase in hiring. Anecdotal evidence from the spring month is pointing to accelerated job growth.

For the dollar, the reaction is straightforward – over a million new positions should keep the greenback bid, especially if accompaniedit  by an increase in the participation rate, an indicator of confidence. Any sub-million gain could be considered a disappointment.

Wage growth is also of interest, as a pickup in salaries would signal rising inflation, but a fresh focus on earnings would probably have to wait for long. 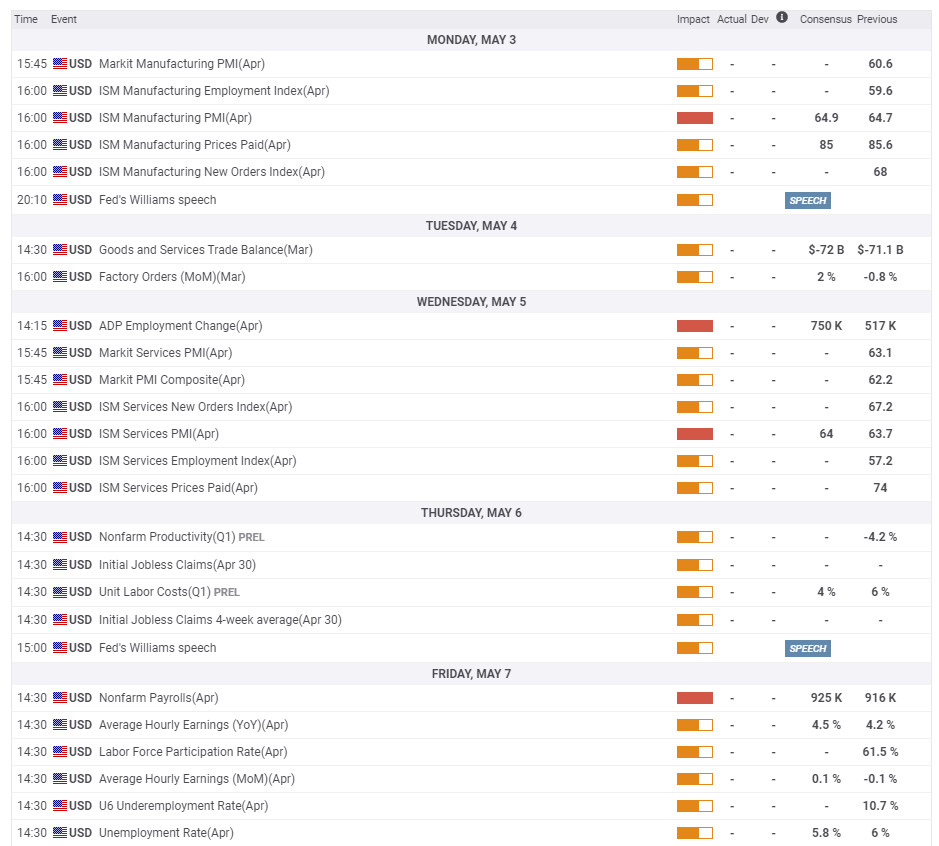 The daily chart shows that pound/dollar is confined to range – from the double-bottom of 1.3670 to the quadruple top of 1.4010. The currency pair's recent upside drift has pushed it above the 50-day Simple Moving Average (SMA) and continues trading above the 100-day and 200-day SMAs. On the other hand, it has been unable to capture the broken uptrend support line that accompanied since late last year and until mid-March.

All in all, bulls are in the lead but lack absolute control.

Will May be the month in which the dollar reasserts itself? A strong jobs report could send GBP/USD to the bottom of the range, regardless of an upbeat message by the BOE. Both events are critical.

The FXStreet Forecast Poll is showing that experts see a period of consolidation around current levels before GBP/USD breaks out in the longer term. Average targets are little changed since last week's poll. It seems that those surveyed are accepting the current range trading. 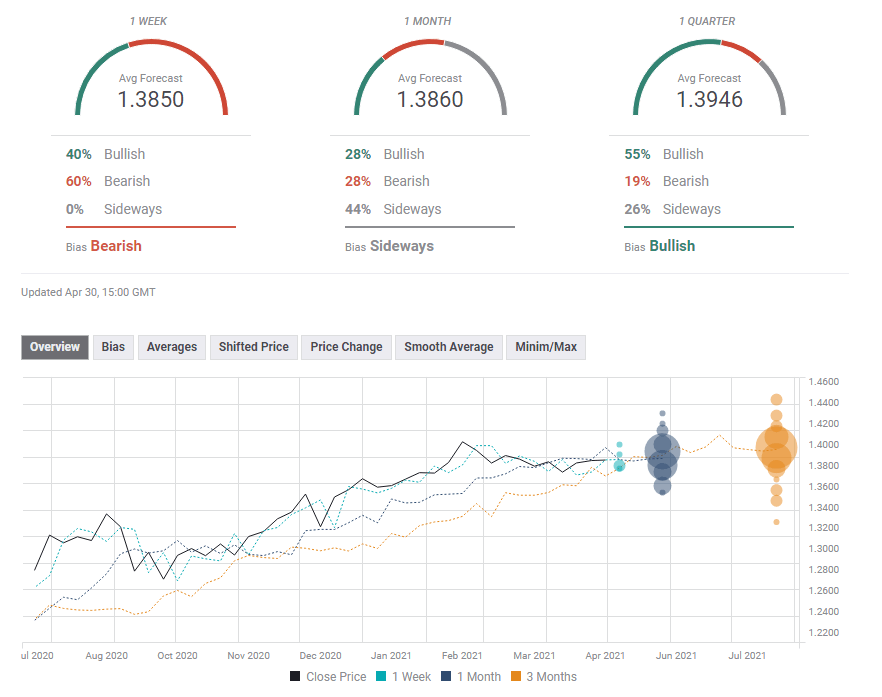