The EUR/USD pair surged this week to 1.2149, its highest in over two months, but was unable to sustain gains and finished the week flat a handful of pips below the 1.2100 level.  The macroeconomic calendar left quite a clear picture: the US economic recovery is two steps ahead of that of its major competitors. However, investors still struggle to decide whether to buy the greenback on upbeat US macroeconomic data or sell it in favor of high-yielding assets.

The US Federal Reserve was the factor that skewed the balance against the greenback this week, as investors were hoping for some tapering chit-chat among policymakers, but chief Jerome Powell repeated his usual mantra of “further substantial progress” toward the Fed’s goals before even thinking about modifying the monetary policy. Powell made it clear that tightening is still off the table, saying it is too early to think about it.

The US and the EU published the first estimates of their Q1 Gross Domestic Product. The US figure was upbeat, as the economy grew by 6.4% vs the 6.1% expected. On the other hand, the Union’s economy contracted by 0.6% in the same period amid local lockdowns and restrictions aimed to control the third wave or coronavirus.

Why is the USD not rallying?

The American currency lacks self-strength. Improving macroeconomic numbers spur optimism, which then translates into demand for high-yielding assets, including currencies from countries that are not in that good shape or see a delayed comeback from the pandemic downturn.  This situation cannot extend forever. At some point, the greenback will run on upbeat data, but it takes more than a swallow to make a summer. Constant growth could be confirmed with Q3 GDP figures. Sooner confirmation will come with monthly employment data, as US Federal Reserve head Powell repeated multiple times that the country still has 8.4 million jobs to recover to return to pre-pandemic levels. Being optimistic, the greenback could begin strengthening by early July.

Other data released this week confirmed the imbalance on the path to recovery.  German data was quite worrisome, as most numbers missed the market’s expectations. The Q1 GDP in the country printed at -1.7%, missing the -1.5% expected, while the number of unemployed people in the country increased by 9K vs a 10K expected drop. Consumer Confidence in the country plunged to -8.8 in May, while the April IFO Business Climate survey improved just modestly to 96.8.

The US CB Consumer Confidence Index jumped to 121.7 in April from 109 in March, largely surpassing the market’s expectations. Weekly unemployment claims came in at 553K, missing expectations but still near the lowest since the pandemic began, a clear sign that the employment sector is in recovery mode. Durable Goods Orders were the exception to the rule, as they increased a modest 0.5% in March.

On Monday, Germany will publish March Retail Sales, while Markit will unveil the final readings of April Manufacturing PMIs. The US will release the official April ISM Manufacturing PMI, foreseen at 64.9 from 64.7 in the previous month.

On Wednesday, Markit will publish the April final Services PMIs for the EU and the US, while the latter will offer the official figure, forecasted to improve to 64. The focus will then shift to US employment-related data as the country will release the ADP survey on private jobs’ creation, foreseen at 750K.

The EUR/USD pair is giving signs of bullish exhaustion. The weekly chart shows that it has failed to add positive momentum, barely holding above a directionless 20 SMA. The longer moving averages maintain their bullish slope far below the current level, but technical indicators reflect limited buying interest. The Momentum is currently retreating from its midline, while the RSI stands pat at around  57.

Technical readings in the daily chart suggest that a corrective decline may soon begin. Indicators keep retreating from overbought readings, and while still above their midlines, they keep gaining bearish strength. The 100 DMA provided support throughout the week at 1.2050, the level to watch for a bearish corrective extension. Once below the level, the slide could continue toward 1.1960, the next relevant support en route to 1.1880. Beyond the weekly high at 1.2149, the pair has room to extend its gains toward the 1.2230/40 price zone. 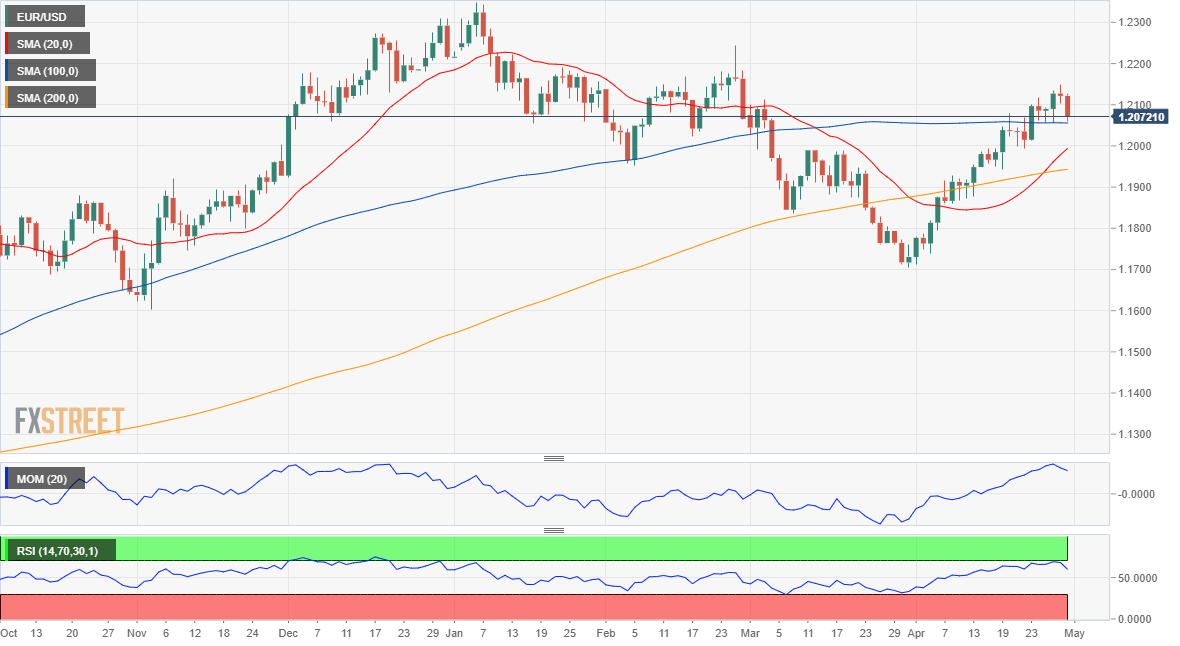 The FXStreet Forecast Poll offers a mixed picture. In the case of the EUR/USD pair, bulls dominate the near-term outlook, but bears took over in the monthly and quarterly perspectives. The pair is seen on average at 1.2074 in the upcoming days, and trading below the 1.2000 figure afterwards.

The Overview chart suggests that bears are gaining ground. In the near term, the moving average is flat, while the quarterly one gains bearish strength. In all the time-frame under study, the range of possible targets is limited. The pair is hardly seen losing the 1.1800 threshold, while the upper end of the range is 1.2200 in the monthly view, with some exceptions above it in the quarterly perspective.