“Will they? Won’t they?” Uncertainty seems to be a common theme for the key factors driving major markets right now. It should therefore come as little surprise that major forex and commodities are stuck in a risk-on/risk-off loop, lacking conviction and range bound. Conflicting daily reports of progress and then lack of agreement on US fiscal support, are dragging the dollar lower then higher, but overall, meaning that a lack of trend is the result. The Democrats and Republicans seem to be too far apart for an imminent agreement, and the prospects of something this side of the Presidential election are dwindling. This has pulled the dollar higher and hit risk appetite in the past day or so. This is also seemingly the case with the Brexit trade deal negotiations between he UK and EU. As this soft deadline of this weekend’s EU Council meeting approaches, there are signs of progress but seemingly not enough for agreement. The talks are likely to continue for a number of weeks. A drag on the negotiations will likely weigh on sterling which is becoming increasingly jittery in recent sessions. Another currency under pressure today is the Aussie, which has reacted poorly to the suggestion from RBA Governor Lowe that yields are too high and that a rate cut to +10bps could be seen.

Wall Street closed lower as the prospects for immediate fiscal stimulus wilted. The S&P 500 ended -0.7% at 3488, whilst futures are also lower today (E-mini S&Ps -0.5%). This has weighed on Asian markets, with the Nikkei -0.5% and Shanghai Composite -0.2%. In Europe there is also a drag on sentiment, with FTSE futures -0.8% and DAX futures -1.0%. In forex, risk-off leaves a mild USD outperformance, with AUD and to a lesser extent NZD the big underperformers. In commodities, dollar gains means that gold (-0.2%) and silver (-0.6%) are struggling slightly, whilst oil is also a shad lower (c. -0.3%).

We have to wait until the US session for any meaningful data on the economic calendar today. There is a clutch of data at 1330BST with a couple of Fed surveys and the weekly jobless numbers. The New York Fed Manufacturing (Empire State) is expected to slip slightly to +15.0 in October (from +17.0 in September). Philly Fed Business Index is also expected to fall slightly to +14.0 in October (from +15.0 in September). US Weekly Jobless Claims are expected to improve slightly to 825,000 (from 840,000 last week). Finally, the EIA Crude Oil Inventories, delayed a day due to Columbus Day on Monday, are at 1600BST and are expected to show a drawdown of -3.4m barrels (after a stock build of +0.5m barrels last week).

Once more there are several Fed speakers to watch out for today, although some repeats of yesterday. FOMC board member Randall Quarles (centrist) is speaking at 1400BST along with the FOMC’s Robert Kaplan (voter, centrist). Furthermore, the most dovish member of the FOMC, Neel Kashkari (voter, very dovish) speaks at 2200BST. It might also be interesting to look out for ECB President Christine Lagarde who speaks at 1600BST, although she is due to speak broadly about the world economy, so may avoid ECB specifics.

It is still a frustrating time to be a bull of silver. Over the past few weeks, it has been a run higher where it has been two steps forward and one step back. This leaves a shallow, now three week, uptrend (which comes in at $23.85 today). However, it also leaves a very tentative feel to the outlook and one which lacks real conviction. The bulls will point to the higher lows and higher highs, but also there is a worry that the market turned back on Monday almost bang on the 23.6% Fibonacci retracement (of the $11.62/$29.84 March to August bull run) at $25.54. This still leaves the 38.2% Fib at $22.88 open as a potential test. After the negative candles of Tuesday and a tepid close higher yesterday, the bulls need to show themselves quickly otherwise the faltering momentum will drag the market lower. The early price action this morning is not helping, as the bulls again fail to ignite. The uptrend at $23.85 is under pressure and is a first support that needs to hold, otherwise a retreat toward $22.54/$23.40 could set in. The hourly chart shows a new near term downtrend beginning to form, with support at $23.85/$24.00 being tested. Initial resistance around $24.60 looks to be becoming a lower high too. 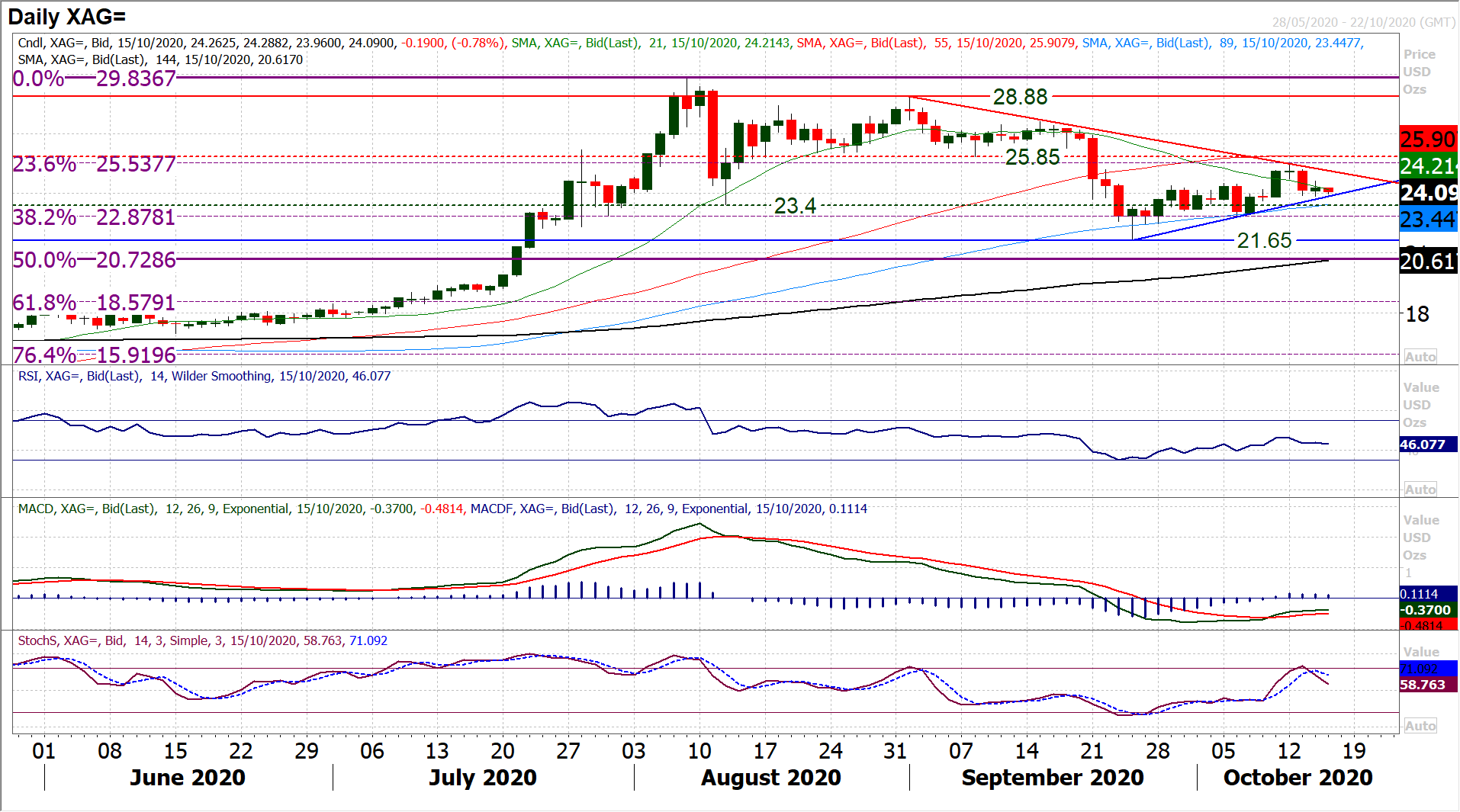 We continue to note the trading ranges on Brent Crude. Initially, there is a medium term, now four month range between $37.00/$46.50. However, more recently, in the past five weeks, the market has built a tighter and much better defined five week range between $38.80/$43.80. It is notable that almost bang in the middle of both ranges is a pivot at $41.30. The pivot has become very prominent in the 5 week range, as a basis of support now. The past couple of sessions have rallied off this pivot and the market is now eyeing a test of the resistance $43.55/$43.80. Momentum is edging with a positive bias, but is so far lacking the drive that would be pointing towards an imminent breakout. With momentum not leading the price, how the market reacts around the $43.55/$43.80 resistance will be important. Given the ranging tendencies for oil, we remain neutral until a decisive breakout is seen. A closing breakout above $43.80 opens the long term resistance at $46.50 once more. 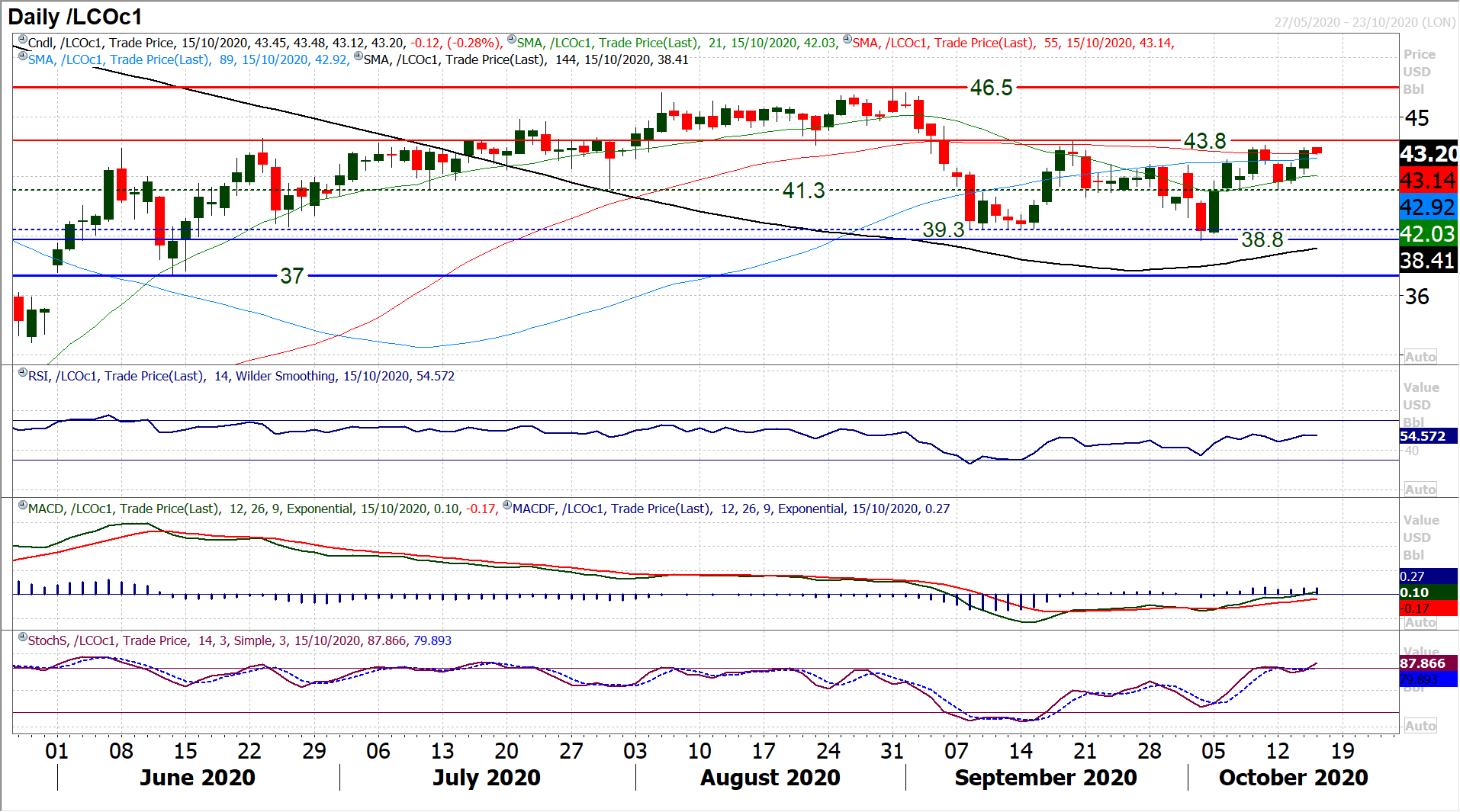 A second successive negative session has weighed on the Dow. The move is now seriously threatening a three week uptrend and with futures pointing to a negative open today, is set to test the breakout support which begins at 28,365 today. With the formation of the now broken uptrend, there were a couple of breakouts, at 28,040 and 28,365. This is now a band of support. These are still above all the rising moving averages, so for now, the market is just pulling back within a bull phase. The formation of support around here would then be seen as a chance to buy. However, if the correction goes further and breaches the first higher low at 27,730 then this would be more considerable damage to the positive outlook. It would suggest hat the Dow is in a bigger sideways range phase. Resistance is now increasingly important at Monday’s high of 28,958 with the hourly chart showing 28,600 was restrictive for much of yesterday’s session. 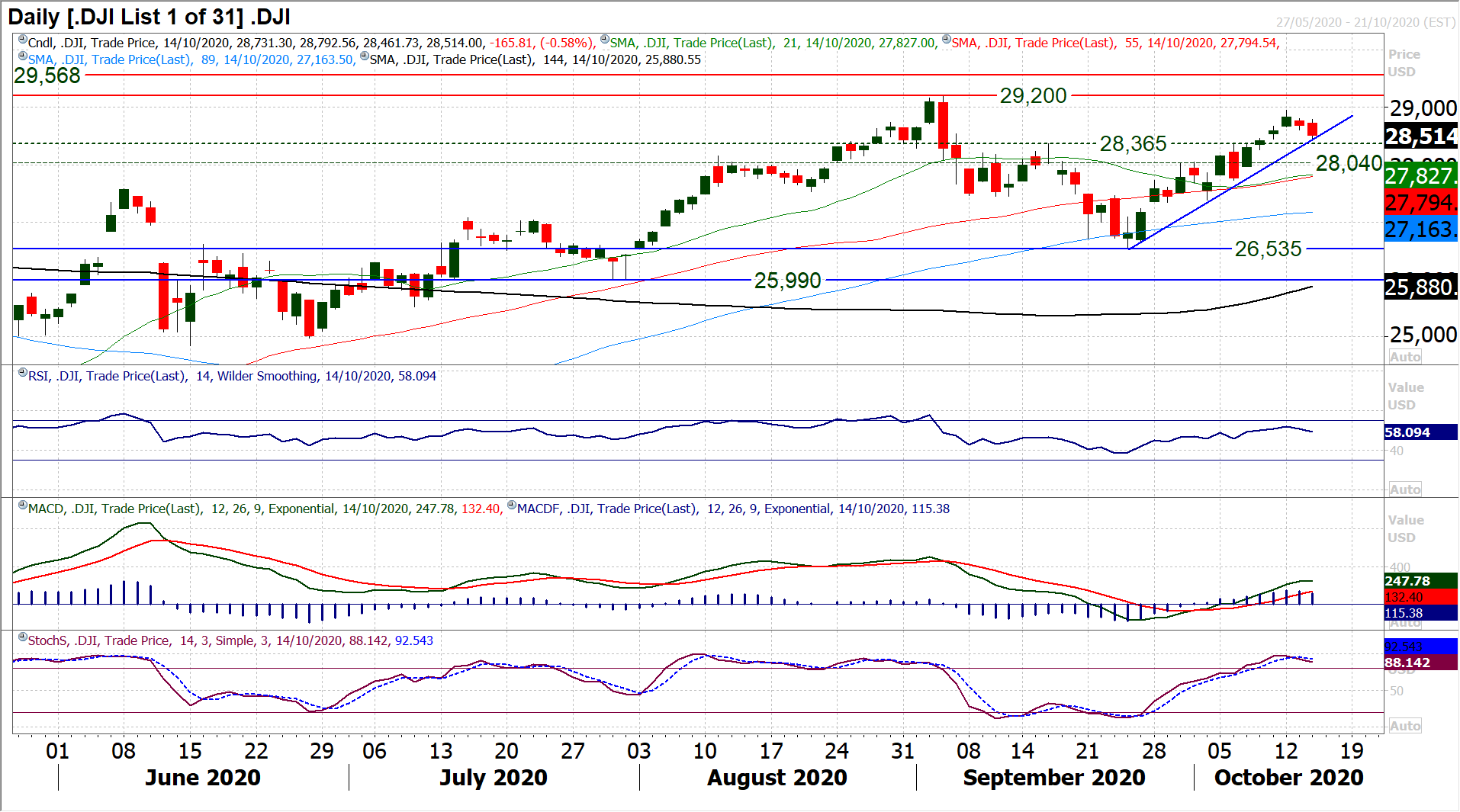