The week began with peak fear and ended at an optimistic high. Surely it cannot be that easy to turn things around, but investor sentiment appears markedly improved after a week of promising earnings from the retail sector, coupled with some strong consumption data to end the week on Friday. Interest rate markets also took a noted doveish turn and now have taken down estimates for year-end interest rates by a full 25 basis points. One week ago fed funds futures were pricing in a 2.75-3% year-end rate. Now they are looking at 2.5% to 2.75% as the rate by December. 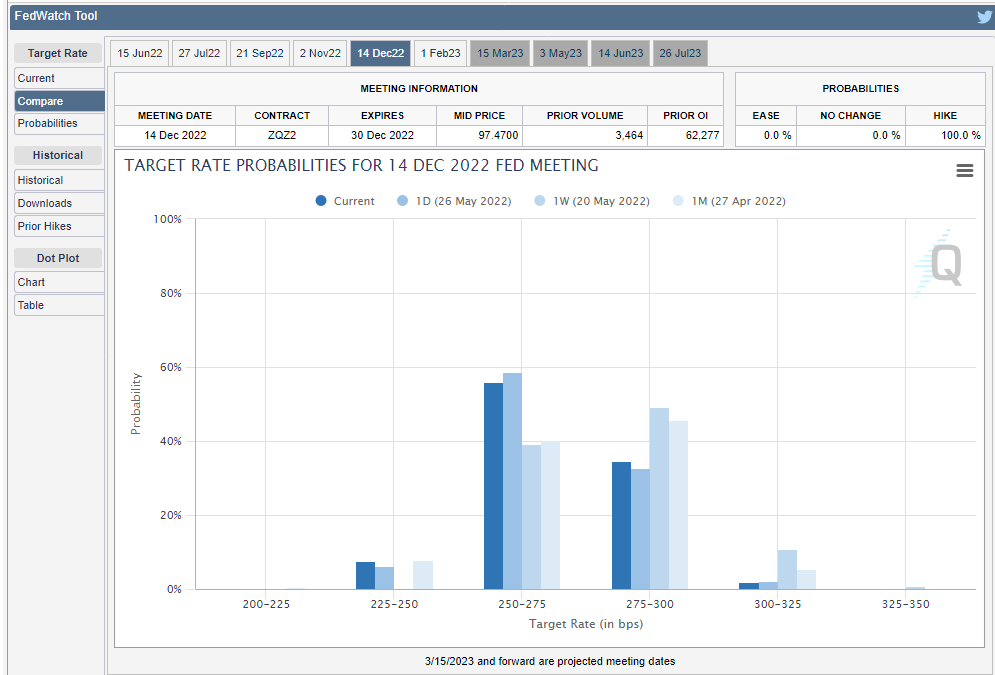 That curious move enabled equities to breathe a little easier. The dovishness was perhaps added to on Friday with the Fed's favorite measure of inflation, the personal consumption expenditures (PCE), coming in as expected and showing a decline versus a month earlier. This welcome decline was seized upon by equity markets, which pushed aggressively higher throughout the day.

However, we must urge caution. Inflation is spreading its wings out into the full realm of the economy. This reduction was due to some high prior numbers dropping out of the calculation, such as used car prices. We are not so dovish based on one reading. We also think the Fed is unlikely to reverse course suddenly as Powell in his last missive promised pain for the equity market. The University of Michigan Sentiment Index has never been this low without a US recession.

Consumers are depressed but still spending money saved during covid lockdowns. That should give a short-term spending boost, and we are already seeing strong booking from travel companies and airlines. That may prove short-lived, whereas inflation will likely outlast the spending splurge. In any event, the spending splurge will not exactly help reduce inflation.

The S&P 500 posted an impressive 5.8% gain for the week, but the Nasdaq took the garlands with a comeback gain of 5.98%. The Dow was up 5.4%. All sectors were positive on the week with Financials (XLF) and Tech (XLK) the strong performers, while Communications (XLC) was the laggard. Meme stocks made some noted gains with GameStop (GME) rising 43% for the week on talk of a short squeeze. Here we go again, but I do not see it this time. GameStop has earnings next week.

A retail rally helped improve investor sentiment more broadly after Target (TGT) and Walmart (WMT) raised serious concerns last week over the economy and consumer spending. This week saw massive relief rallies from Dollar General (DG), Dollar Tree (DLTR), and Macy's (M), while Costco (COST) limped behind. We had outlined such a likely rally after the bad news was fully priced in following Target and Walmart.

Tesla (TSLA) and Twitter (TWTR) also made gains after Elon Musk increased his personal financing to $33.5 billion for the proposed Twitter deal. The saga could run on and on, however, as the Securities & Exchange Commission (SEC) is on the case over Elon's late filing. Regardless, Tesla rallied strongly to close 7% higher at $733. During the week we published our deep dive on Tesla with a $400 price target. We included a DCF and relative valuation comparison, take a look here.

Friday's rally needs to be put in the context of a number of positive factors. First, seven straight weeks of decline have only happened three times before in history – 1970, 1980 and 2001. Odds were in favor then of a rally. Second, fund managers and hedge funds were very underweight equities. Third, it is a long weekend, so squaring up is always common. Fourth, sentiment indicators were terrible, so a countertrend rally was likely. Forgive us for not getting too excited just yet.

That brings us neatly to our technical overview. The SPY has rallied nicely up to our first resistance at $415. This really needs to break if this move is to be maintained. If not, then expect new lows soon.

Let us assume though that this rally is gaining strength. If it is, a stretch to $435 is the real target. This could be choppy and a break up to $440 or even $445 would really confound the bears and stretch early bearish selling. Remember a lot of people were positioned or waiting for this rally. Many are looking to sell the rally, and most of those sell orders will be at $435. The market is set up to stop many of them out by overstretching the rally to $445. 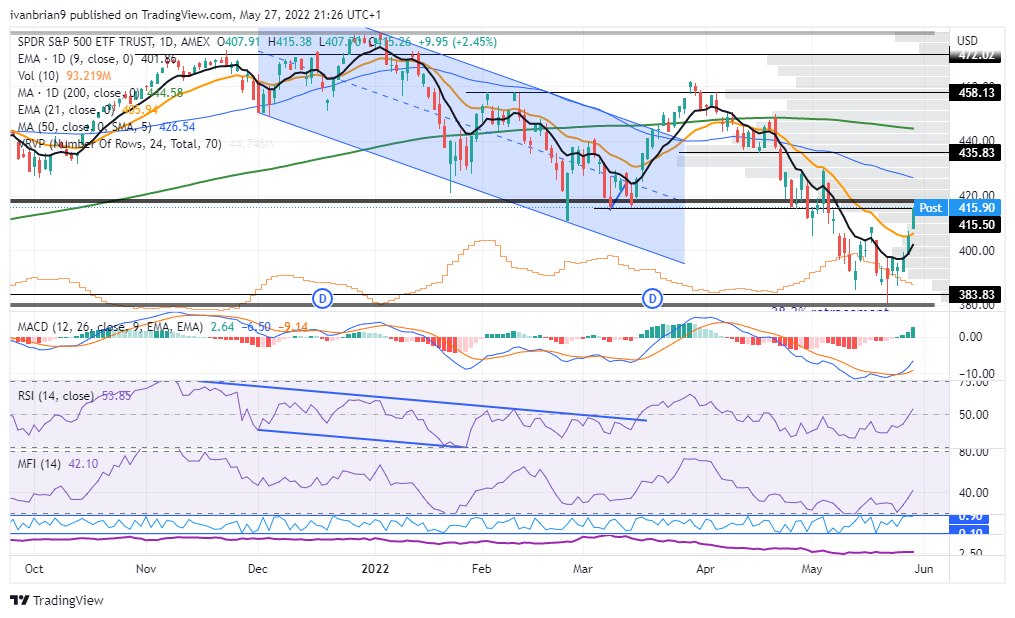 GameStop is the highlight for retail and meme traders. There is not much else to get too excited about: earnings season is done and dusted. 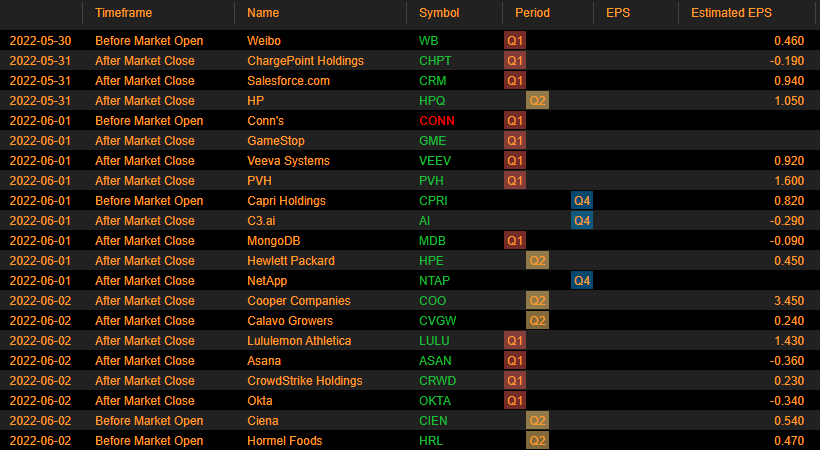 Monday is a holiday, so things build nicely with some Fed speakers until we get to Friday's jobs report. 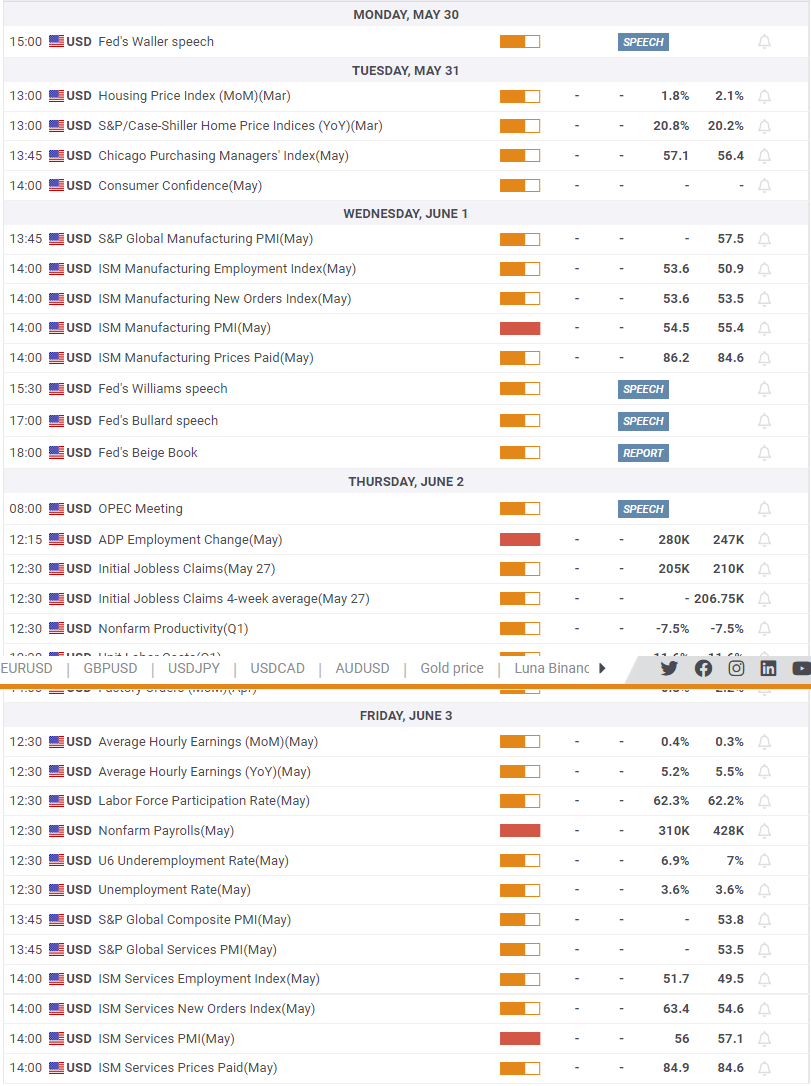 The author is short Tesla and Twitter and long GGPI.

EUR/USD has managed to stage a modest rebound in the American session and climbed above 1.0400. Despite the risk-averse market environment, falling US Treasury bond yields after the latest inflation data seem to be limiting the greenback's gains for the time being.

GBP/USD rises above 1.2150 as dollar retreats

Gold has gained traction and turned positive on the day above 1.2150. With the US T-bond yields falling sharply on soft inflation data, the US Dollar Index turned south and erased a large portion of its daily gains, helping GBP/USD push higher.

Gold rebounds toward $1,820 on falling yields

Gold has turned north and advanced to the $1,820 area after having dropped toward $1,800 earlier in the day. The benchmark 10-year US T-bond yield is down more than 2% on the day near 3% after the latest US data, fueling XAU/USD's upside.

Ethereum price has breached a critical area of support over the past few hours, dipping below $1,000. The Fibonacci retracement indicator shows that ETH lacks any significant support levels that could keep prices at bay.