Fading US Treasury yields put a floor under the Japanese yen after it reached a 24-year low against the dollar at 137.00 on Wednesday.

By Friday morning in New York, the yield on the 10-year Treasury had dropped more than 30 basis points from Monday's close at 3.210% as American data pointed to the rising chance of an economic contraction in the second quarter. The USD/JPY responded by falling more that two figures to below 135.00.

The widening spread between Japanese Government Bonds (JGB) and US Treasuries had been driven exclusively by the American side. Credit markets reflected the Federal Reserve’s inflation rate program, more than doubling the 10-year yield from its 2021 close at 1.514% to its June 14 high at 3.480%.

Federal Reserve officials continued their rhetorical flourishes against inflation. Appearing at an ECB forum with the Bank of England’s Andrew Bailey and Christine Lagarde head of the host bank, Fed Chair Jerome Powell insisted that higher inflation will not be allowed to become endemic.

Data from the US suggested that the economy is rapidly weakening while inflation remains untamed.

The Personal Consumption Expenditures Price Index (PCE), the Federal Reserve's chosen inflation gauge rose 6.3% for the year in May, close to its 40-year top of 6.6% from March. The core rate slipped to 4.7% from 4.9% as expected.

Real Personal Income and Spending, adjusted for prices, were both negative in May. The Purchasing Managers Index (PMI) for manufacturing from the Institute for Supply Management (ISM) slipped to 53 in June, from 56.1 prior and missed its 54.9 forecast. The indexes for Employment and New Orders dropped below 50 into contraction, with new business at its lowest level since March 2020 at the height of the pandemic lockdown.

The Atlanta Fed’s widely followed GDPNow model rated second quarter growth at -1%, its first contraction, bringing the possibility of a first-half recession dramatically to life. First quarter annualized GDP was revised to -1.6% from -1.5%. 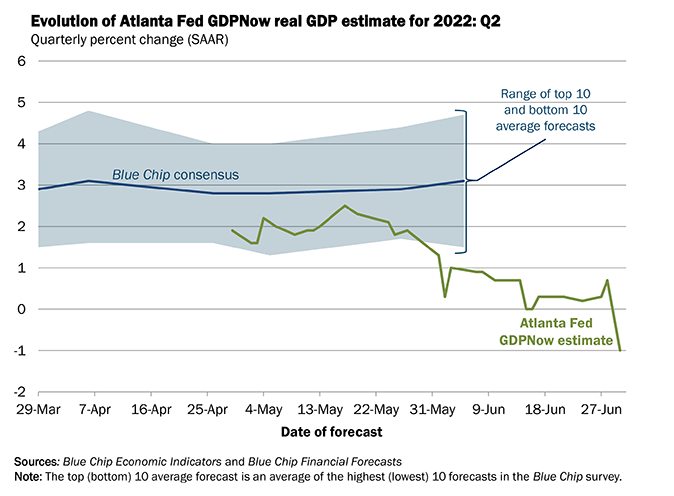 Japanese data was generally worse than forecast with Industrial Production and Consumer Confidence in May and the Tankan Survey for the first quarter all missing their forecasts. Retail Trade (sales) in May  were an exception to the trend, rising 3.6% (YoY) from 3.1% and beating the 3.3% prediction.

The USD/JPY prospects remain tied to US Treasury rates and the outlook for the economy. This week provided the first concrete information that inflation’s disruption has gone deeper than mere consumer inconvenience and has begun to damage growth. Consumer purchasing power has fallen for 15 straight months, eroded by rampant price increases, as wages and income have failed to keep pace. If the US consumer is forced to cut back on spending because necessities, food, transportation and shelter have rocketed higher, a recession is practically inevitable.

Second quarter GDP will be reported on July 28, one day after the Fed meeting. The governors are widely expected to hike the fed funds by 75 basis points.This would be the third hike in a row and the second 0.75% increase. Even at a 2.50% upper target, the base rate would still be 100 basis points below the Fed’s end-of-year projections of 3.4%.

The Fed has given no quarter to the notion that its rate hikes could be halted by a recession.  Markets are not buying that hard talk. Treasury yields have come off sharply  in the last two weeks and will continue to fade if US data crumbles.

Japanese data in the week ahead will be incidental to market action. The Eco Watchers Survey for June that tracks regional trends is the most interesting.

American information will again dominate market results, led by the minutes of the June 15 Federal Open Market Committee (FOMC) meeting and Nonfarm Payrolls for June on Friday. The governors’ thinking on a US recession is the chief interest in the minutes. How will Fed policy evolve if the US does strike a recession in the second quarter. Services PMI will be examined for confirmation of the steep drop in manufacturing New Orders Index. If new business in the far larger service sector follows manufacturing into contraction, the odds of a recession rise and so will the pressure on US Treasury rates.

There has been no appreciable retreat from the March to June ascent in the USD/JPY. That 18.9% increase is ripe for profit-taking. The Treasury-JGB spread has been a powerful support for the USD/JPY, as it decreases it will take the USD/JPY down with it.

The USD/JPY outlook is lower.

Monday July 4 is a US Federal holiday and all markets are closed.

The MACD (Moving Average Convergence Divergence) Wednesday cross of the signal line and its widening gap on Thursday and Friday is a classic early sell signal. Confirmation is obtained from the Relative Strength Index (RSI) which has declined to its lowest point in two weeks. The Average True Range (ATR) still exhibits high potential volatility as the USD/JPY’ trades near its quarter century peak.

The FXStreet Forecast Poll is heavily weighted to a technical drop in the USD/JPY.

EUR/USD came under heavy bearish pressure, now trading below the 1.0100 level and at its lowest for this month. Although the data from the US showed that Existing Home Sales fell sharply in July, the economy seems resilient to global woes.

GBP/USD extended its daily slide and touched its weakest level since late July below 1.1970. The broad-based dollar strength, as reflected by a more than 0.5% increase in the US Dollar Index, forces the pair to continue to stretch lower in the American session.