The AUD/USD pair is closing the week with substantial gains and above the 0.6900 figure, its highest daily close since late July. The pair run four out of the last five trading days, hesitating only Thursday when the market found out that Chinese representatives were said to be doubting they could reach a long-term trade deal with the US. Most gains, on the other hand, were the result of the dollar’s broad weakness on the back of the Federal Reserve monetary policy latest stance.

Trade war and the Federal Reserve

The market was concerned about the US-China trade deal ever since Chilean President cancelled the APEC summit this November, with concerns fueled by the above-mentioned headlines. US officers, included President Trump, poured some cold water on the matter.

Equities tumbled with the Fed’s decision to pause rate cuts but clarifying that rate hikes are not in the horizon, although a better-than-expected US employment report sent Wall Street back up, usually a positive factor for the Aussie.

Australian data failed to impress, as the country released quarterly inflation figures at the beginning of the day, with the cost of living up by 1.7% in the three-month to September, meeting the market’s expectations and slightly above the previous. HIA New Home Sales were up by 5.7% in September, worse than the expected 33.7% and below the previous 7.3%. The AIG Performance of Manufacturing Index resulted at 51.6 in October, down from 54.5, while the Commonwealth bank PMI resulted at 50 from 50.1.

Chinese numbers were mixed, as the October NBS Manufacturing PMI came in at 49.3, below the previous and the expected 49.8. The Non-Manufacturing PMI for the same month resulted in 52.8, also missing the market’s forecast of 53.9. The Caixin Manufacturing PMI, on the other hand, beat expectations with 51.7.

The macroeconomic calendar will be quite busy in Asia next week, as Australia and China will release the final versions of their October Services PMI. Next Tuesday, the RBA is scheduled to have a monetary policy meeting. Policymakers could pause after bringing rates to a record low of 0.75%, but Governor Lowe’s speech is expected to be utterly dovish.

By the end of the week, China will release its October Trade Balance, with special attention in the trade exchange with the US.

Closing above the 0.6900 level, the AUD/USD pair is confirming a double-bottom figure, clear in the daily and weekly charts, of around 230 pips’ height, which means that the pair could extend gains up to the 0.7100 region.

The weekly chart shows that the pair is closing well above its 20 SMA for the first time since mid-July, although far below the larger ones. Technical indicators head firmly up within neutral levels, falling short of confirming a sustained advance.

In the daily chart, the pair is developing above the 20 and 100 SMA, with the shortest heading sharply higher. The 200 SMA offers an immediate dynamic resistance at around 0.6960. Technical indicators recovered after a mild-downward correction, heading higher near overbought levels, in line with further gains ahead. 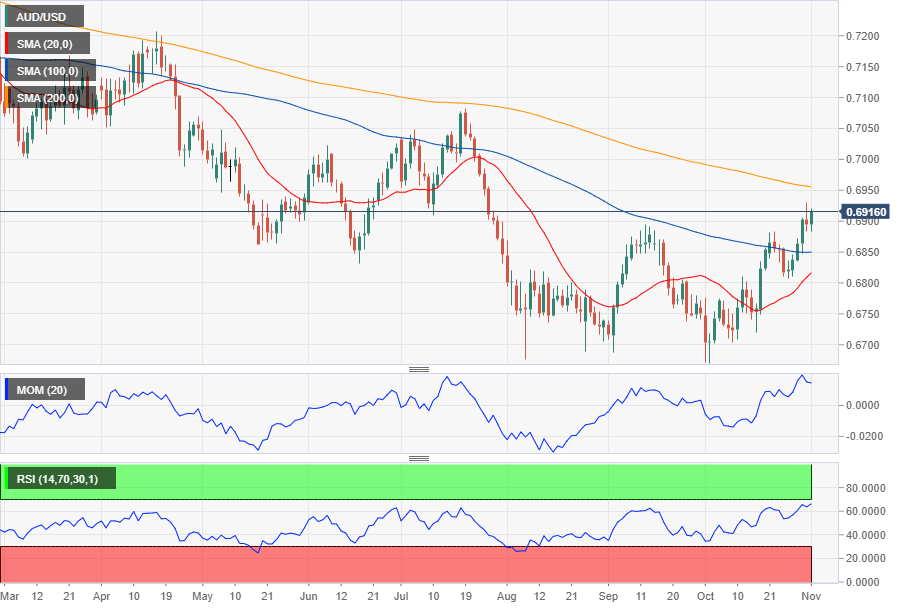 The Overview chart doesn’t provide clear clues, as most targets are accumulating around the current level, with mild bullish slopes in the three time-frame under study. The spread is wide in the quarterly view, although those seeing large deviations have decreased.

USD/JPY Forecast: Can the dollar recover from the Fed? Trade talks hold the key