The American dollar gave back its previous weekly gains, ending this one down against all of its major rivals. The decline was caused by China casting doubts about a long-term trade deal with the US, and comments from US Federal Reserve Chief, Jerome Powell. The EUR/USD pair finished the week with gains at around 1.1130.

The Fed met on Wednesday and, as expected, it cut rates by 25bps to between 1.5% and 1.75%. It was the third rate cut this year, and the accompanying statement suggested that policymakers are done for now, as Powell said that the current level is “likely to remain appropriate,” in line with the Fed’s expectation of moderate economic growth. As usual, Powell said that the central bank would respond accordingly to economic developments. The encouraging tone of the Fed’s head should have kept the greenback running, although there was a particular comment that made speculative interest change course.

Powell said that they would need to see a “really significant move up in inflation,” before considering raising rates to address inflation concerns. The dollar’s collapse came after these last words, signalling no rate hikes in the foreseeable future.

An upbeat Nonfarm Payroll report helped the USD recover some ground on Friday, as the economy added 128K new jobs in October, while September figure was upwardly revised to 180K from 136K. The unemployment rate ticked higher as expected to 3.6%, while the participation rate increased by 63.3%. Wages’ growth was in line with the market’s expectations. The report, however, doesn’t change the US Central Bank stance, neither the dollar’s weak stance. The final version of the Markit October PMI came in at 51.3, missing the market’s expectations and further limiting dollar’s gains.

Meanwhile, European data released these days was mildly encouraging but continued signalling slowing growth in the Union. According to the preliminary estimate of Q3 GDP, growth was of 0.2% in the three months to September. Also, October core inflation was at 1.1% YoY, better than the previous 1.0%. On a down note, the Economic Sentiment Indicator for the Union contracted to 100.8 in October from 101.7 previously.

The upcoming week will be lighter in terms of first-tier data, but won’t lack entertainment. The final versions of October PMI will be out, both for the US and the EU. Germany will release Factory Orders, Industrial Production, and Trade Balance data, all of it with chances of making the EUR tumble. The most relevant figure in the US will be the preliminary estimate of the Michigan Consumer Sentiment Index for November, seen at 94.7 from 95.5 in October.

The weekly chart shows that the EUR/USD pair is closing around a mild-bearish 20 SMA, having hovered around it for a third consecutive week.  Technical indicators head higher but around their midlines and without enough strength to support further gains ahead. Still, the pair is trading at its highest in two months and has scope to continue advancing.

In the daily chart, the pair is above a bearish 100 DMA while the 20 DMA heads sharply higher below this last. The 200 DMA heads south at around 1.1200, offering dynamic resistance. Technical indicators consolidate within positive levels, lacking directional strength but skewing the risk to the upside. 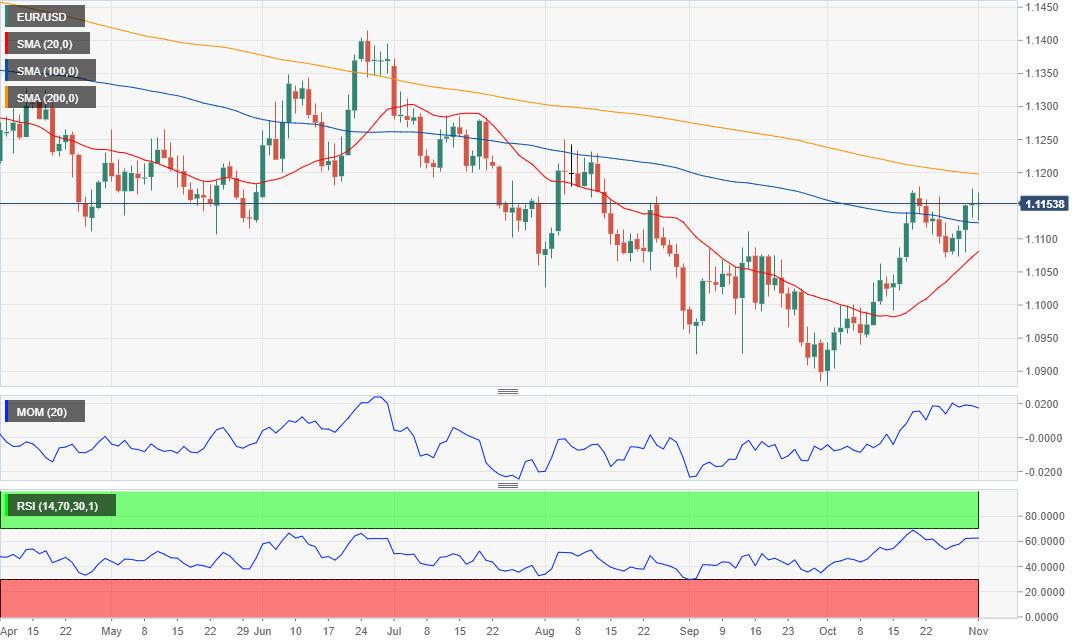 The FXStreet Forecast Poll points to further dollar slides next week, although the American currency is seen recovering against most rivals afterwards. In the case of the EUR/USD pair, 59% of the polled experts believe the pair will rise next week, with an average target of 1.1147. In the monthly perspective, however, bulls slump to 26%, while bears account for 70%, with the pair then closer to 1.1000. In the 3-month view, bears are up to 73% with little change in the average target, seen a handful of pips above 1.1000.

The Overview chart shows that the moving averages for the first two time-frame under study are bullish, but it turns flat in the quarterly perspective where most targets accumulate around or below the current level.

USD/JPY Forecast: Can the dollar recover from the Fed? Trade talks hold the key