Bitcoin price has been consolidating since the flash crash on September 7. As BTC coils up, altcoins, including Ethereum and Ripple, follow suit. While BTC shows the possibility of an upward breakout, ETH and Ripple remain unclear.

Bitcoin price in a tricky position

Bitcoin price dropped from roughly $53,000 to $42,850 on a single day. However, the recovery rally kicked in, pushing BTC up to $46,883. Since then, the big crypto has been consolidating but slowly heading lower.

Just above the $44,705 support level, Bitcoin price has stabilized and shows signs of restarting an uptrend here. While this move might seem logical, the market makers might push BTC down to the demand zone, ranging from $41,461 to $39,147, before reversing the trend as this would collect the most liquidity. Investors need to be aware of this potential drop.

As for the upside, Bitcoin price needs to breach through $46,833 to have a chance at retesting the $50,000 psychological level. 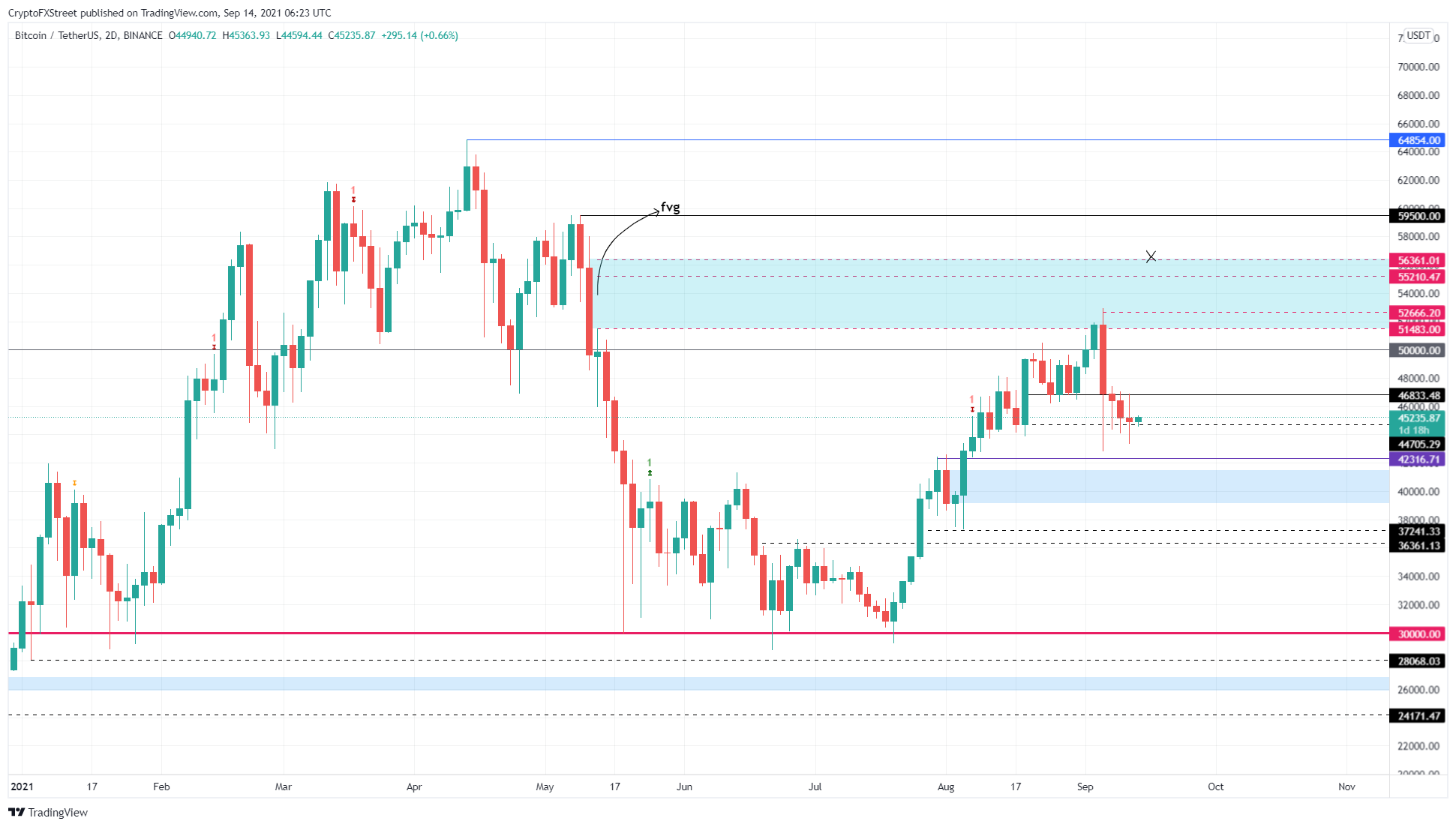 While things seem straightforward, a retest to the demand zone ranging from $41,461 to $39,147 could turn sour quickly if the sell-off exacerbates, producing a decisive close below $39,147. This move would invalidate the bullish outlook and open the path for further descent.

Ethereum price shows no directional bias or patterns that would help its cause. Instead, ETH is consolidating between the $3,429 and $3,223 barriers. However, unlike BTC, the smart contract token has a plethora of support up to $3,011.

Therefore, any short-term spike in selling pressure does not threaten the second-largest cryptocurrency. Investors can expect ETH to slice through the $3,429 resistance barrier to kick-start the uptrend. However, this new rally will receive a boost if the buyers can manage to flip the $3,524 hurdle into a support foothold.

Such a development will open the path for the buyers to propel ETH up to $4,000. While this is a bullish outcome, its journey is sprinkled with roadblocks at $3,716 and $3,926 before it can tag the $4,000 psychological level. 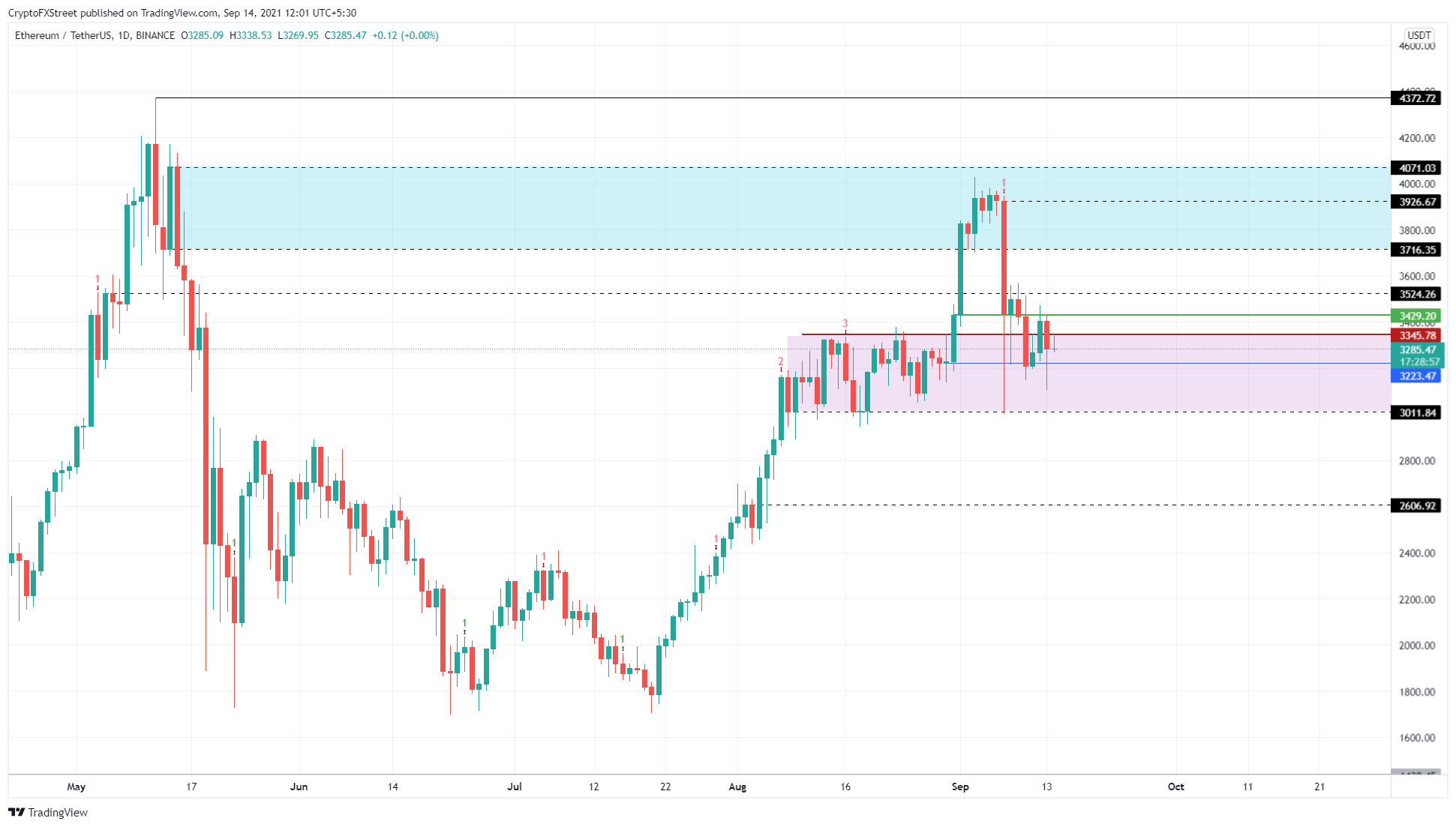 On the contrary, if Ethereum price fails to slice through $3,429, it will indicate an increased selling pressure and lack of bullish momentum. This move will sow the seeds of fear among investors, which could prove fatal if ETH produces a decisive close below the $3,000 support barrier as it would invalidate the bullish thesis.

In this case, market participants can expect Ethereum price to explore the lower territory.

Ripple price teeters on a stable barrier for too long

Ripple price set up two equal swing lows at $1.05 on August 18 and August 27. The third retest of this level came after the September 7 crash, but the XRP price is still holding above it for roughly a week now.

While the chances of an upswing are not impossible, investors should be careful of a retest of the 50% Fibonacci retracement level at $0.966. This move is likely to collect liquidity resting below the August 12 swing lows.

Such a move is likely to trigger a rally to $1.236, the immediate resistance ceiling. Clearing this area will open the path for the range high at $1.423. 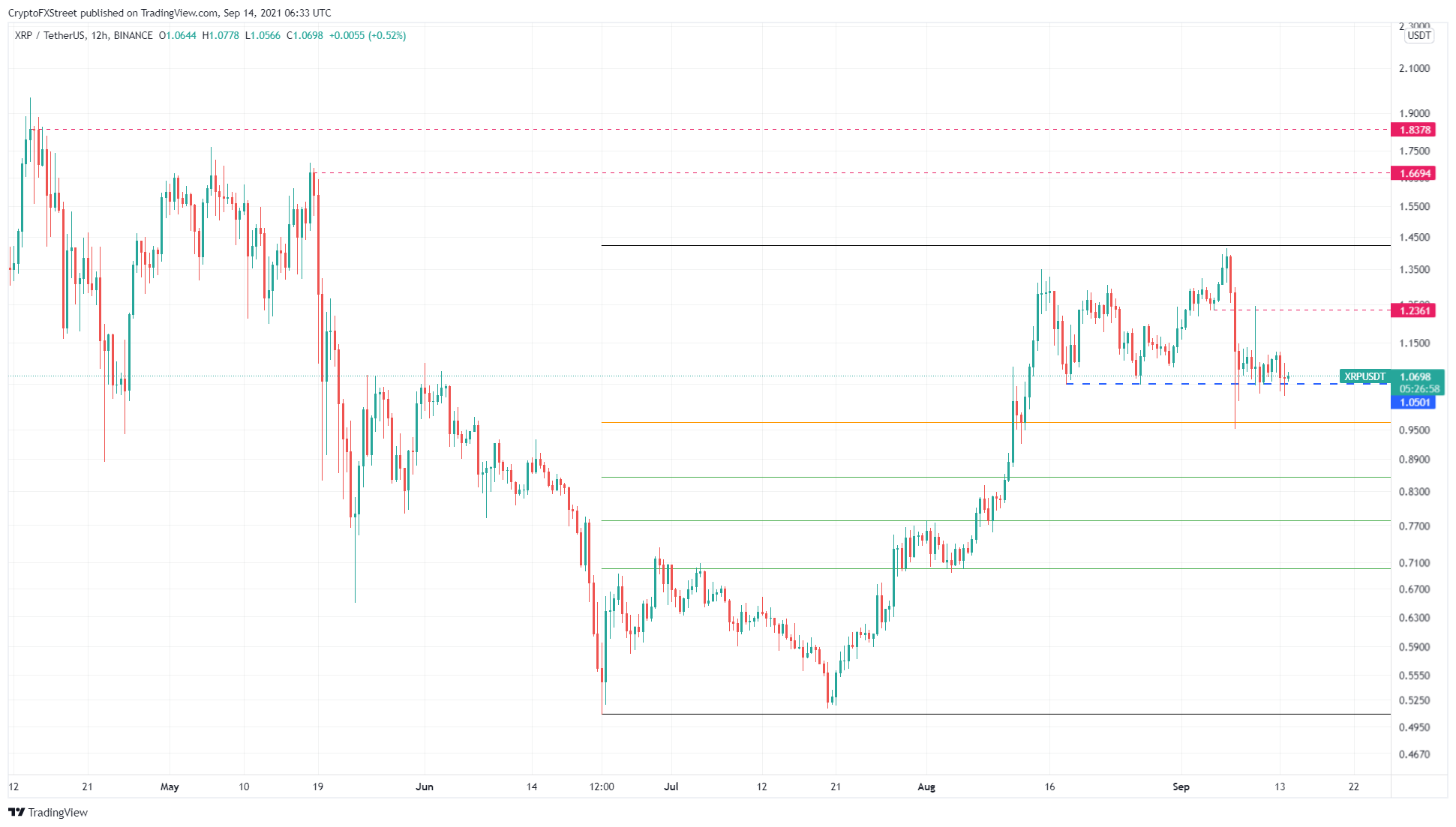 On the other hand, the drop to the 50% Fibonacci retracement level at $0.966 could be the start of Ripple’s woes. A potential spike in selling pressure that pushes XRP price to produce a decisive $0.779 support floor will invalidate the bullish thesis.