Cardano price has been a top performer that was leading the bull run. IOHK developers pushed out several major upgrades to the blockchain, which has improved its utility drastically.

However, what is interesting is that ADA has not seen a healthy pullback relative to its massive and explosive run-up. Therefore, investors should be wary of this coin, especially if significant support gives way.

Cardano price saw a humungous upswing from $0.10 in late 2020 to more than $2 in 2021. In hindsight, ADA received some of the most critical upgrades to its blockchain during this period, like the Mary hard fork, Goguen upgrades and so on, which have played a role in its exponential growth.

ADA price hit an all-time high at $2.51 on May 16 and has been on a downswing ever since. So far, the so-called “Ethereum killer” has dropped roughly 41% and shows signs that it could go lower.

The reason behind the bearish sentiment around Cardano price stems from two reasons, the cryptocurrency market structure and weak recovery after recent crashes and ADA’s on-chain metrics.

Bitcoin price is eyeing a potential head-and-shoulders pattern that could send the entire market spiraling. Considering ADA’s strong correlation with BTC, if the overall market takes a nosedive, Cardano price is likely to follow suit.

Additionally, Cardano price appears to be correcting after failing to rally higher. As ADA trades above two stable support levels at $1.40 and $0.981, the prospects of a downswing multiplies. Therefore, shattering $0.981 will open the floodgates, triggering a 46% downswing to $0.525 or a 57% correction to $0.414.

From its current position ($1.53) to $0.414, if this drop manifests, Cardano price could reduce more than threefold. 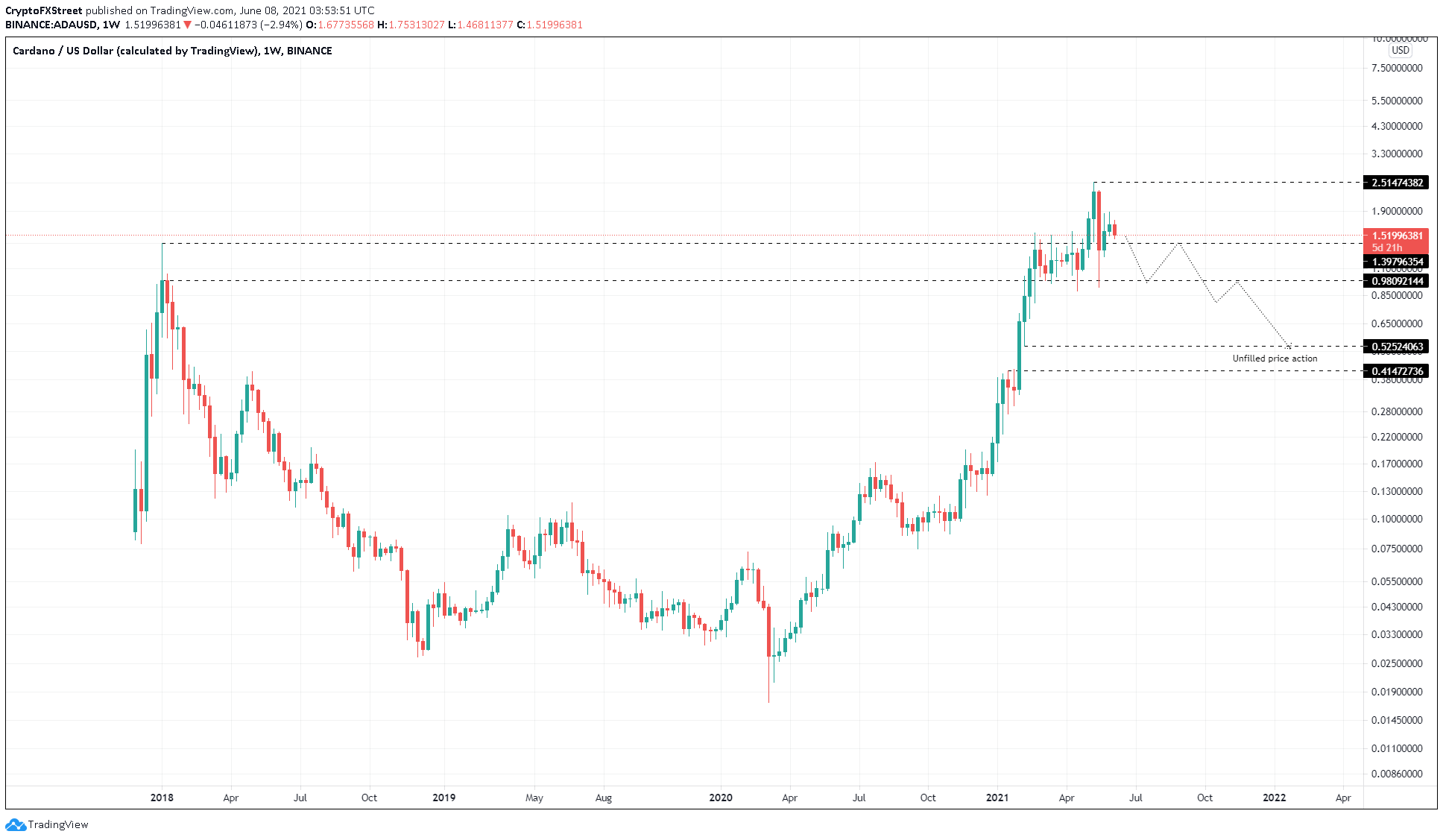 The first red flag supporting the bearish thesis explained above is based on IntoTheBlock’s Global In/Out of the Money (GIOM) model. This metric reveals that a majority of the holders who purchased ADA did just before the all-time high.

Based on GIOMA, roughly 465,000 addresses previously purchased 7.7 billion tokens at an average price of $1.68. These investors are “Out of the Money” and might be inclined to sell if ADA continues to head lower, adding selling pressure to the current bearish outlook.

The three immediate support clusters hold only 7.35 billion ADA, relatively fewer tokens than the underwater investors at $1.68. This contrast suggests that the potential downswing will be brutal.

Addresses that hold less than 0.1% of Cardano’s circulating supply are defined as retail. These investors own 27.03 billion tokens or 76.28%. In contrast, whales that own greater than 1% of the supply constitute roughly 1.44% or 511 million ADA.

Retail investors are not known for their patience and usually panic-sell during times of upheaval. Therefore, if the potential sell-off does occur, these holders might add to the selling pressure.

Further painting the grim nature of ADA distribution is the sharp decline in holders or investors holding ADA for more than a year. The addresses of these market participants have dipped from 213,000 in June 2020 to 170,000 to date.

This 20% nosedive indicates that long-term holders are not confident in the future performance of ADA price.

Therefore, investors need to keep a close eye on the support levels at $1.40 and $0.981. A breakdown of these barriers might trigger a massive sell-off.

Fundamentals and optics for ADA are improving exponentially

While the technical and on-chain perspectives are overly bearish, the fundamental outlook is warm and promising. Throughout 2021, Cardano blockchain has received vital upgrades that have transformed it for the better and improved its utility.

Some of these updates include the Shelley, a milestone implemented in July 2020, that was recently improved in 2021, shifting the block production from federated to completely decentralized.

Furthermore, the Goguen era, which is yet to gain traction, will bring smart-contract capability to the Cardano blockchain.

Another critical development is the IOHK team’s partnership with the Ethiopian government to build a blockchain-based, student-teacher solution known as Atla PRISM. Adding a tailwind is their collaboration with Tanzania’s World Mobile Group to democratize access to digital, financial and social services in Africa, leveraging the capabilities of the ADA blockchain.