Cardano blockchain adoption takes flight after the second major partnership in Africa. ADA price also made headway but failed to follow through and is now bouncing off a crucial support level.

This deal that utilizes Cardano blockchain comes right after IOHK’s recent collaboration with Ethiopia’s Ministry of Education to help connect teachers and students via their Atla PRISM solution. The new announcement will also leverage the same technology but to provide stable internet connectivity using solar-powered energy.

Together, the companies will provide affordable network nodes, based on the Cardano blockchain infrastructure, to local business owners. These network nodes act as local relays for internet connectivity. Subscribers to these networks will be able to access Input Output’s digital identity solution, Atala PRISM, which will allow them to use services such as digital banking, healthcare and education.

Cardano has been breaking barriers when it comes to adoption. The blockchain has also received significant upgrades that have fortified its fundamental value, boosting the utility token and ADA’s market value by an egregious amount.

ADA price surged nearly 30% in less than four days, allowing it to retest the supply zone that extends from $1.35 to $1.39. Although unsuccessful in breaching it, Cardano has found support on an immediate demand barrier that stretches from $1.19 to $1.25.

A likely scenario would be to consolidate between the two barriers until one camp overwhelms the other leading to a breakout.

If ADA breaches through the supply barrier’s upper trend line at $1.39, it will signal the start of a new uptrend that could propel Cardano price 11% to all-time highs at $1.55. 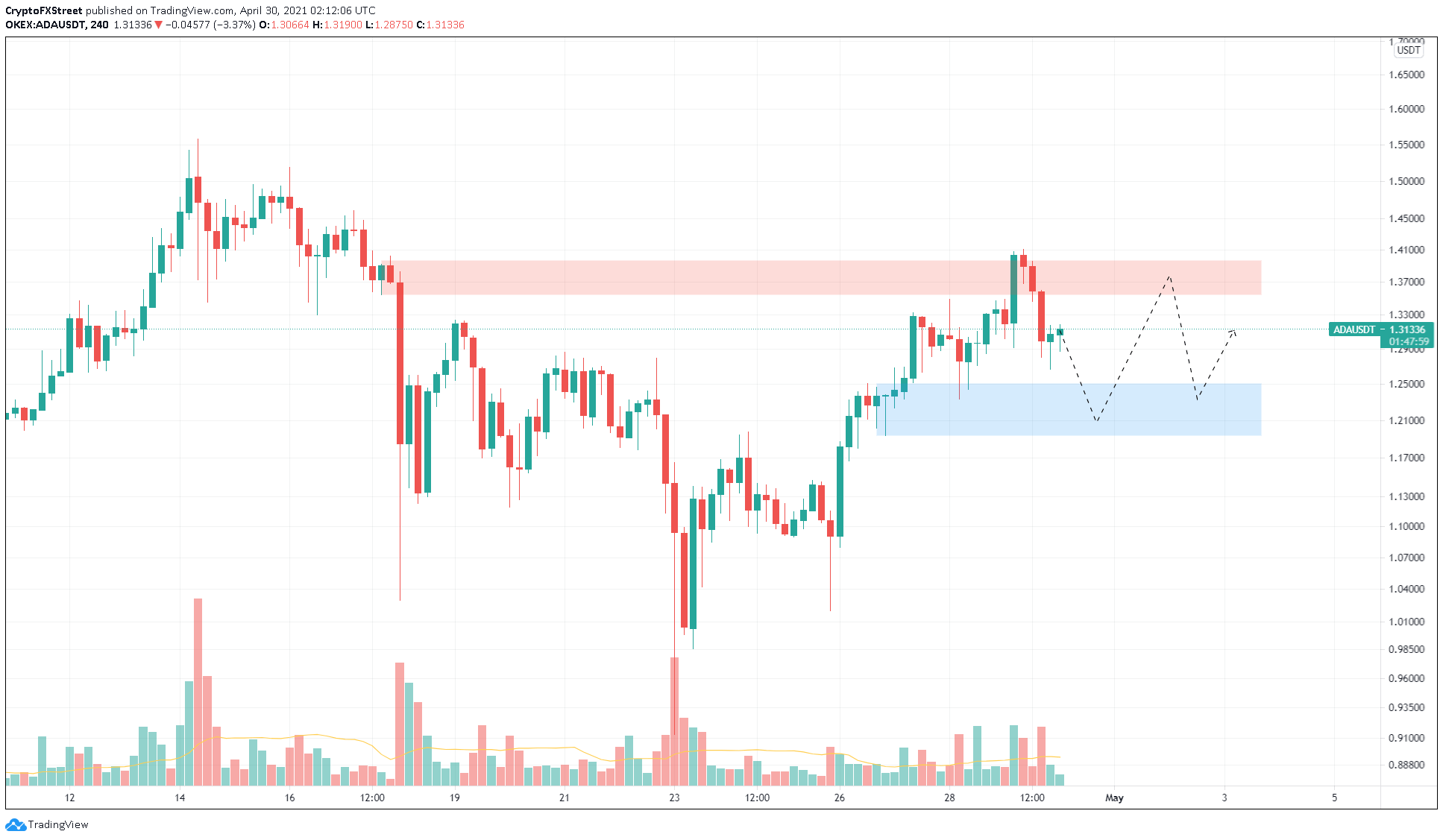 Supporting this upswing is IntoTheBlock’s In/Out of the Money Around Price (IOMAP) model, which shows stacked support levels below the current price, ready to absorb any short-term selling pressure.

Moreover, there are only two feeble resistance barriers at $1.36 and $1.44, where roughly 86,000 addresses that purchased nearly 1.4 billion ADA are “Out of the Money.”

Hence, slicing through these hinderances will open Cardano price up to a path of least resistance to retest its all-time highs.

However, if the buyers fail to build up steam, leading to a pile-up of ask orders, the demand barrier will face invalidation. A decisive 4-hour candlestick close below $1.19 will create a new lower low, signaling the strength in sellers.

Under these conditions, investors can expect ADA price to find support at $1.14.