This month, we look closely at factors behind decline in manufacturing and slower economic growth in 3Q19. Rising budgetary risks led to sell-off in local bonds.

Besides the current economic cycle, there are some structural changes in local manufacturing causing a slowdown. They were already visible in past years and will last into the future.

Romania's manufacturing started to contract in May this year and was one of the weakest in the EU in recent months. With limited prospects for a quick turnaround in sight, we took a closer look at what is behind the recent trends. We identified the eroding price competitiveness of low-tech industries and falling external demand as factors responsible for the slowdown. 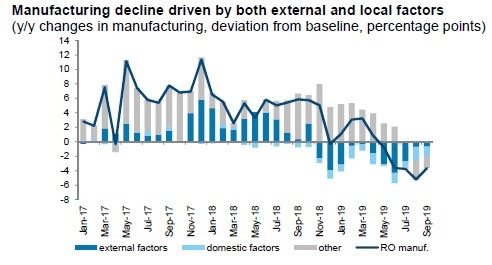 Note: The blue line is the deviation of the annual change of manufacturing from the unconditional forecast (baseline), whereas the bars denote the contributions of different types of shocks to this deviation.

We revised downwards our economic growth forecast to 4% in 2019 (from 4.5%) and 3.5% in 2020 (from 3.8%). Next year's growth is heavily dependent on the orientation of the fiscal and income policies, since current legislation, which comprises new increases in public wages and pensions, is at odds with the objective of maintaining fiscal discipline.

We foresee a higher budget deficit in 2019 (4.3% of GDP, up from 3%), due to a series of one-off budgetary items and a different fiscal strategy of the new government at the end of the year.

What is behind shrinking manufacturing?

First layer of weakness: eroded price competitiveness of low-tech industries 1 in past years

Unable to absorb rapid increases in low wages and facing the stability or even small appreciation of the Romanian leu in real terms in recent years, low-tech industries saw their competitiveness eroding at the international level.

These industries were already shrinking long before overall manufacturing began to feel the cold wind from the Eurozone at the end of 2018. The tobacco industry, textile industry, clothing, leather manufacturing and wood manufacturing (which make up around 15% of total manufacturing) started to contract already in 2015-16. They have not recovered since. In some cases, the collapse was huge – industrial production in the manufacture of clothing shed 30% in real terms and this sector has lost 20% of its labor force since 2015. This is in stark contrast with overall manufacturing, which grew by 18% in cumulative terms since 2015 and increased its number of employees by 5%.

Cost-competitive industries are labor-intensive. Clothing manufacturing has a 38.9% share of personnel expenditure in turnover, 30.6% in leather manufacturing, well above the sector average of 14% in 2017. These industries are strongly exposed to business relocation towards other countries with low labor costs.

Weak investment activity in most of these sectors does not bode well for their future endowment with capital. Eurostat data shows that the average investment rate (calculated as investment/value added at factors cost) was 11.6% in 2010-17 in the manufacture of wearing apparel, three times smaller than in overall manufacturing. Leather manufacturing at 13.4% is another example of an industry where robots have slim chances to replace people and people will eventually find other jobs.

Eurozone manufacturing PMI and economic sentiment indicators entered a downward trend in 2018, affecting local sectors oriented towards foreign markets. The trade conflict between the US and China, difficulties faced by the global car industry and Brexit worries came at a moment when local manufacturing was not in very good shape. The impact of the slowing German industrial sector was particularly important this year, explaining nearly 20% of the drop in Romania's manufacturing in 3Q19.

Sectors exposed to external markets (share of direct exports in turnover at 60-70%) saw the steepest decline in 2019. Low-tech industries took a double hit and there were also some medium high-tech industries (motor vehicles, electric equipment, machinery and equipment) contracting in 2019. At the other end of the scale, sectors geared towards the domestic market (food industry, repair and maintenance) were cushioned against negative effects coming from abroad.

We see the recovery of manufacturing in two steps. The first one relies on a cyclical recovery of the Eurozone economy, which should lift local industries with international competitiveness based on non-cost factors (i.e. relying on investments and technology, usually beneficiaries of FDI in recent years).

The second step concerns the future path of low-tech industries. It requires structural shifts in the economy based on cooperation between the government and the private business environment. A quick reversal of current negative trends is not in sight because low wages will continue to grow fast, driven by political decisions (increase in minimum wage) and external migration of the labor force. Transformation of low-tech industries is also challenging from a social point of view. Strong reliance on these industries in some regions across Romania leaves little alternatives for people living in these areas.

The development of other industries where Romania has a high trade deficit and can capitalize on its natural strengths, like the food industry, could be a solution. Differentiated government support schemes to incentivize private investments in areas where trained a labor force can be found more easily but road infrastructure is poor is an option until proper infrastructure is built. Migration of the labor force towards services could also be explored, since exports of services is not always limited by the underdeveloped road infrastructure network.

The historical time series of GDP was revised significantly downwards by the National Institute of Statistics (NIS), which explains part of the forecast deviation from the actual figure. In the absence of a GDP breakdown from the NIS, we think that retail sales and services continued to support the growth in the third quarter. Industrial production, on the other hand, held back the economic advance. External headwinds, ranging from Brexit to the US-China trade war, continued to weigh on manufacturing. Agriculture remained a big unknown and probably a source of negative surprise.

Slower growth will be the norm in the next quarters, due to weak business activity in the Eurozone and fading effects of the loose fiscal policy. We revised downwards our economic growth forecast to 4% in 2019 (from 4.5%) and 3.5% in 2020 (from 3.8%). Next year's growth is heavily dependent on the orientation of the fiscal and income policies, since current legislation, which comprises new increases in public wages and pensions, is at odds with the objective of maintaining fiscal discipline.

Inflation to rise in coming months

Adjusted CORE 2 inflation was flat at 3.4% y/y in October for the third month in a row, after a steady upward trend from 2.4% y/y last December. The deceleration of the headline inflation rate in recent months was temporary and the consumer price index will rise towards 4% at the end of 2019. In 2020, there are upside risks for the inflation rate, due to the likely adoption of a new calendar for the liberalization of natural gas and electricity prices.

The story for the NBR's monetary policy is unchanged. Arguments in favor of monetary tightening related to local inflationary pressures and the expansionary fiscal policy are counterbalanced by the NBR's need to remain in sync with the ECB and peer central banks in the region. Thus, we see the policy rate flat at 2.50% in 2020.

Weaker economic growth was accompanied by a slower widening of the external imbalance in recent months. The annualized current account deficit was unchanged in September compared with August at EUR 10.6bn (12- month rolling sum).

Although fiscal policy was still loose, the current account showed signs of levelling off since May this year, fluctuating between EUR 10.3bn and EUR 10.9bn in annualized terms from one month to another. We think that future steps towards fiscal prudence would bring a more visible adjustment of the current account deficit through a slowdown in imports of goods.

Budget deficit close to 4% this year

With no major cuts in locally-financed CAPEX at the end of the year, accelerated VAT reimbursements to private companies and no extraordinary budget revenues in 4Q19, the budget deficit should land at 4.4% of GDP in 2019, according to the budget rectification approved by the government. We see the 2019 budget deficit close to this official figure.

A number of things have changed in recent weeks, influencing our previous budget deficit forecast of 3% of GDP in 2019. Rejection by the EC of the request of the Romanian government to settle past investment expenses using European funds (in December 2018, this attempt was successful) had a negative impact of 0.2% of GDP on the budget deficit. The auction for 5G telecom licenses was postponed until 2020 and this shaved 0.2% of GDP from this year's budget revenues. We estimate that accelerated VAT reimbursements to companies will add some 0.2% of GDP to the budget deficit, so we have a total of around 0.6% of GDP of extraordinary budgetary items.

Further, the new government seems to follow a different strategy with respect to locally-financed CAPEX and an aggressive cut at the end of the year is no longer an option. Budget rectification showed a very small cut in CAPEX (0.02% of GDP). With little clarity regarding the government's fiscal plans for 2020, we keep our deficit forecast for next year at 4% of GDP.

Long-term yields increased by 20-30bp in November, with bouts of sell-offs triggered by increased awareness of investors of the fragile state of public finances. The budget rectification project, showing a deficit at 4.4% of GDP already in 2019, coupled with disappointing data about economic growth in 3Q19, led to an increase in long-term yields. Investor nervousness was amplified by a lack of concrete details about future fiscal consolidation steps.

We think that the Ministry of Finance will use part of its liquidity buffer in December to cover the increased gross funding needs for 2019 derived from a considerably higher target for the cash budget deficit. Remaining gross funding needs are estimated at RON 15bn in December alone (1.4% of GDP) and we see slim chances that monthly bond issuance will be close to this figure. Potential regained fiscal credibility in January 2020, based on swift adoption of next year's state budget, with concrete measures towards fiscal prudence, could reverse the current increase in yields, creating a good environment for replenishing the liquidity buffer over several months.

An alternative scenario, with a lack of political will to tackle budgetary imbalances, would expose long-term bonds to new sell-off rounds. Shortterm bond yields could be helped by rising market liquidity in December and January, due to higher spending by the Ministry of Finance.