Whereas this year will be memorable in many ways, USD/JPY behavior might not. The world suffered the worst pandemic in almost a century. Brexit remains unsolved. US Donald Trump lost the presidential reelection. The US-China trade war became irrelevant, while governments and central banks flooded markets with money. Roughly 500 million jobs were lost globally so far, and economies saw unprecedented levels of economic contraction. A global recession that may have not yet bottomed. And nobody saw it coming.

Quite a monothematic period, the world gravitated around COVID-19, a newborn virus that originated in China by the end of 2019. It took over Europe and the US and jumped to the rest of the world. By March, it was too late to do anything. Still, nobody saw it coming.

Three months of chaos were followed by three months of hope. The last quarter of the year, the one that should have seen the word moving back into “normal” and economies picking up, was even more chaotic. And once again, nobody could anticipate it early enough.

Facing the pandemic, Japan had a cultural advantage. High levels of pollution in an overpopulated country, exacerbated by the March 2011 earthquake and the subsequent Fukushima nuclear plant disaster, had made the use of a face mask something quite common in the country.

Using a face-piece, even if not a medical one, and maintaining a certain distance is the best toll the world has up to today to prevent contagions. In the US, face masks turned into a political statement in an election year, as US President Donald Trump has long refused to wear one.

The other most common tool is quarantine, the mother of the economic downturn. There were just a few countries that refused to impose lockdowns, and the US was one of them. New York was the epicenter of the pandemic and actually suffered severe restrictions back in March, but in general, the US economy kept in marching. And so did the Japanese one. Temporal and localized lockdowns took place on both sides of the Pacific in the last nine months.

Yet, by mid-December, the US reported over 17.5 million cases over a population of 332 million, while Japan has had 187K cases over a total population of 126 million. Japan has a total of 2,740 deaths, while the US reported roughly 320,000 by mid-December. Vaccines brought hope, but it didn’t last. The world’s immunization is going slowly even with emergency approvals, and it would take most of 2021 to reach enough people to achieve herd immunity. 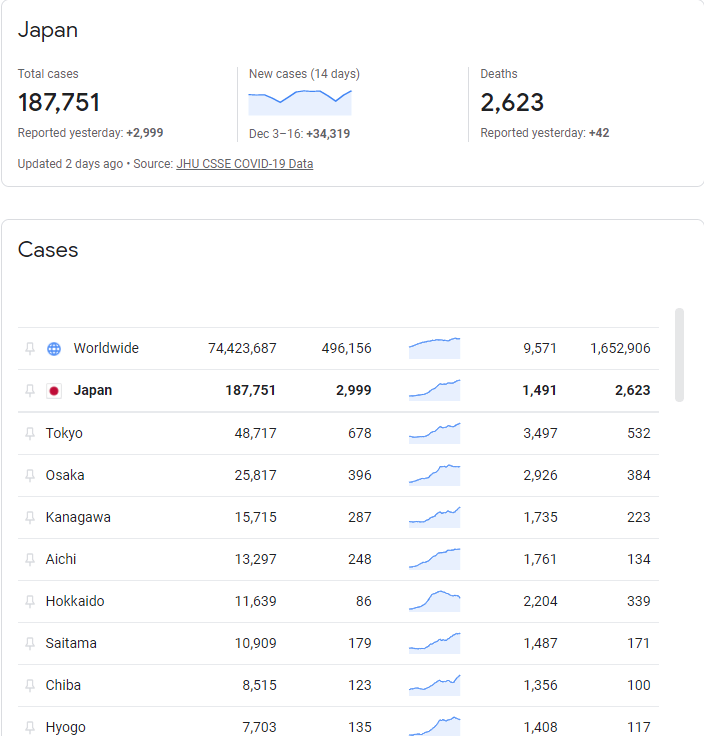 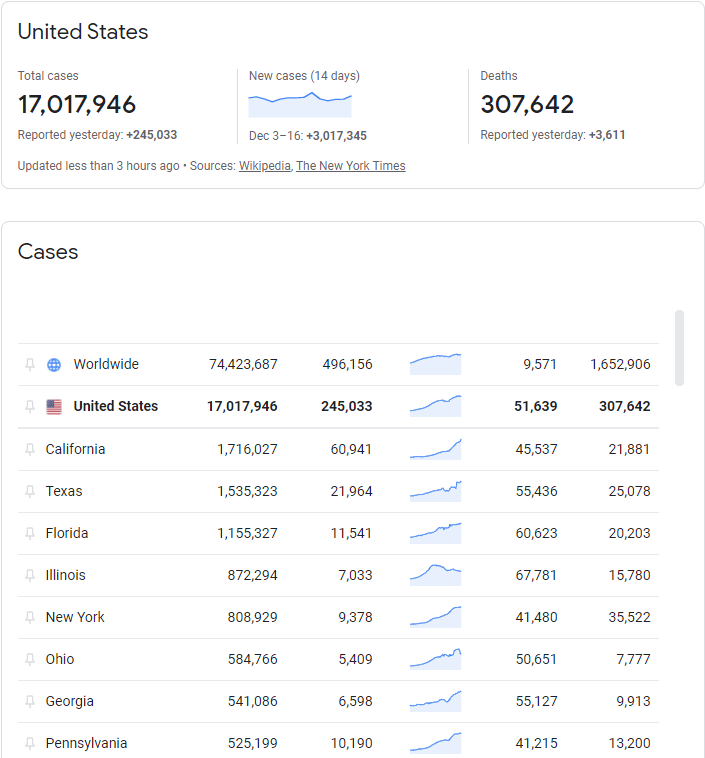 Major economies actually rebounded in Q3. In the three months to September, Japan’s Gross Domestic Product jumped 21.4% in seasonally-adjusted annualized terms, contrasting the historic 28.8% fall logged in the second quarter. Something similar occurred in the US as the GDP surged by 33.1% when compared to a year earlier, following a 31.4% slump in Q2. However, the economic performance of both countries remains well below pre-pandemic levels.

The US lost roughly 22 million jobs between March and April and managed to recover nearly half of those between May and November. The latest Nonfarm Payroll report showed that the country added measly 245K new positions in November. It could take the US a couple of years to return to previous levels at such a pace. Japan lost over 70,000 jobs due to the pandemic, according to November data.

Meanwhile, the US annual inflation rate stands at 1.2% YoY as of November 2020, while the Japanese one printed at -0.9% in the same period.

The prolonged impact of the COVID-19 pandemic resulted in worldwide central banks launching asset-buying and lending programs while keeping the main rates on hold at record lows.

At the December meeting, the Bank of Japan decided to keep the key interest rate at -0.1% and the 10-year government bond yield target at 0.0%. It also extended its emergency lending program by six months to September 2021. The BOJ announced it “will conduct an assessment on further effective and sustainable monetary easing,” and pledged to maintain the current monetary easing until inflation reaches the 2% goal.

The US Federal Reserve also maintained its monetary policy unchanged, as expected, and policymakers reiterated its pledge to support the economy using its full range of tools for as long as needed within the current pandemic context. Since June, the Fed has been buying $80 billion in Treasurys and $40 billion in mortgage bonds per month. There was a critical change in the official statement. In the previous documents, policymakers announced that they would maintain their bond-buying programs over the “upcoming months,” changing it this time to “until substantial further progress” is being made toward employment and inflation goals.

Before the pandemic, US inflation was close to achieving stability above the infamous 2%, while the Japanese one remained far from it. Persistent mild deflation in Japan is not just linked to weak economic growth but also the ageing population.

The world has entered a stage of plummeting consumption, which turns into spare capacity in multiple sectors, the employment one included. Governments and central banks had put all their efforts to support financial stability, both sides of the economic equation, demand and supply. So far, massive action has been enough just to keep the economies afloat. Growth, inflationary pressure and job creation for the upcoming generations remain yet to be seen.

People cling to hopes. According to the International Monetary Fund (IMF), global growth is projected at 5.4% for 2021. That would be below pre-pandemic levels, but a step in the right direction. As said, vaccine immunization and returning to “normal” will be critical towards an economic comeback.

Given Japan’s better performance in controlling outbreaks and its long discipline tradition, it seems that the Asian giant has an advantage over its Western rival when it comes to returning to normal.

On the other hand, the US is a consumer nation. The key would be job creation. Whereas the US is capable of creating employment, the local economy would bloom. And inflation will run towards the central bank target much faster than in Japan, which has been incapable of defeating deflation for decades.

The government change may be what the US needs to move in the right direction, as President-elect Joe Biden has made it clear that he will be handling the pandemic much differently than his predecessor.

Still, 2021 won’t be the year of the comeback. It will be the beginning of the process. Luckily, by the last quarter, the world will be able to see the light at the end of the tunnel.

Taking a look at the monthly chart and dismissing March’s wild swings that sent the pair down to 101.17, USD/JPY is trading at levels last seen by the end of 2016. Back then,  a critical low was set at 98.95. The bearish trend seems firm as USD/JPY is ending December below the 200 SMA, which provided support in the mentioned 4-year period. The 20 SMA crosses below the 100 SMA, as technical indicators maintain their bearish slopes within negative levels.

In the weekly chart, the strength of the downward trend is even more evident. After meeting buyers around a firmly bearish 20 SMA, the pair has accelerated its decline and reached lower lows. Technical indicators head south within negative levels, without signs of bearish exhaustion.

Should the price break below the mentioned 101.17, the next bearish target comes at the mentioned 98.95. Only a steeper economic downturn and panic over the future can see the pair losing this last in 2021 and result in a further 400-pip decline.

The bearish case will remain firmly in place as long as the USD/JPY pair trades below a descendant trend line coming from March 2020 high at 111.70, currently around 105.00. Beyond this last, the pair’s recovery can extend towards 106.40. An advance beyond this last should see a tide change, with bulls taking over and targeting the critical 110.00 threshold. 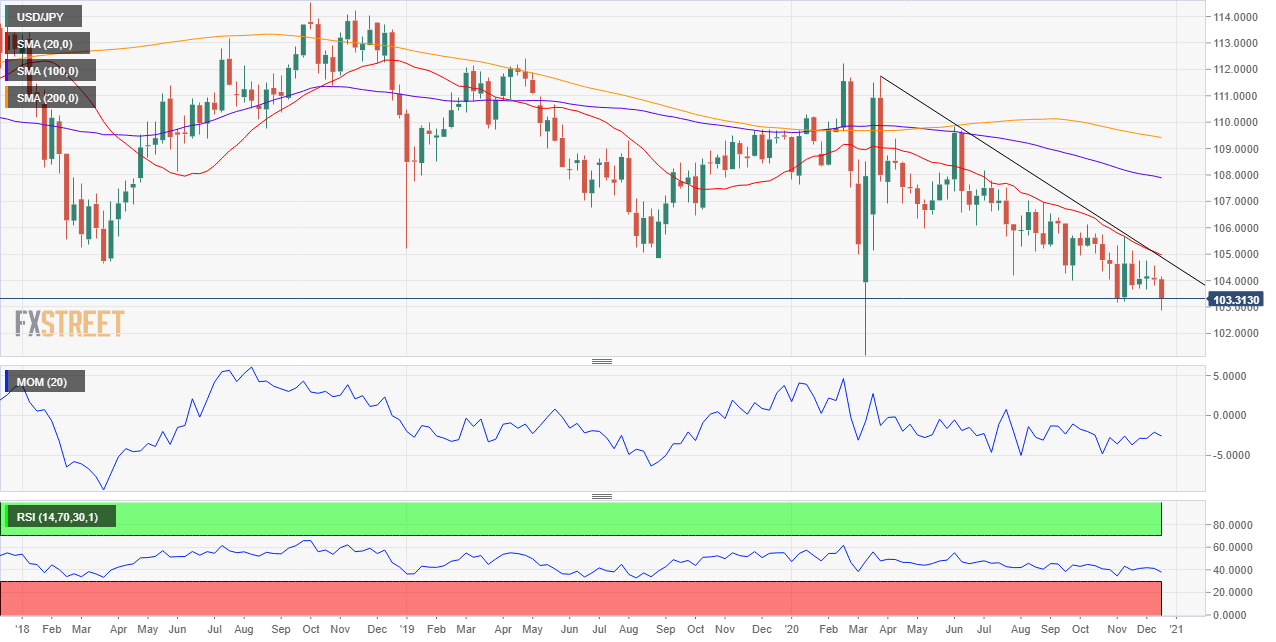 Gregor Horvat projects a long-term recovery for the dollar/yen pair on his Elliott Wave analysis:

USDJPY is tricky since it’s trapped in a triangle formation that can be a bullish or bearish one, but even a bearish one may see another rise within two contract rise; up from the lower side of a range to around 110. 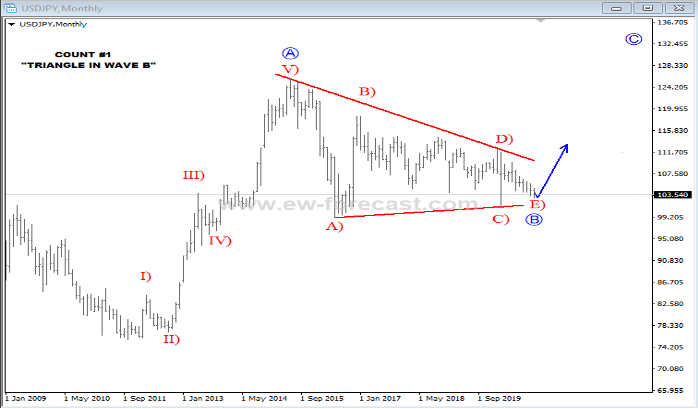 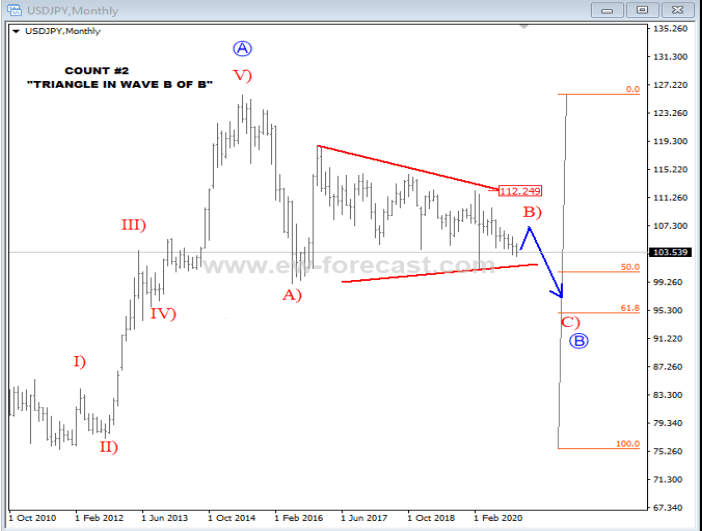 Expecting a strong rally in price for Q1 and Q2 until 109 resistance. Then a slow and stead drop until the end of Q4 to around 106.

The JPY is gaining further strength in coming months as stock markets are cooling off and a phase of risk off returns.