American job creation forged ahead in June and, for a month at least, may have negotiated the cross-currents of the economy, fast enough to set aside a labor market stall and temper wage increases but not so excessive to excite talk of a bond taper.

Nonfarm payrolls rose 850,000, better than the 700,000 estimate from the Reuters survey and an improvement on May’s revised 583,00 total. The unemployment rate unexpectedly climbed to 5.9% from 5.7% as more people sought work and were counted among the jobless.

A more expansive measure of labor market dislocation, the underemployment rate, which includes discouraged and many part-time workers, dropped sharply to 9.8% from 10.2%, its first time below 10% since March 2020. 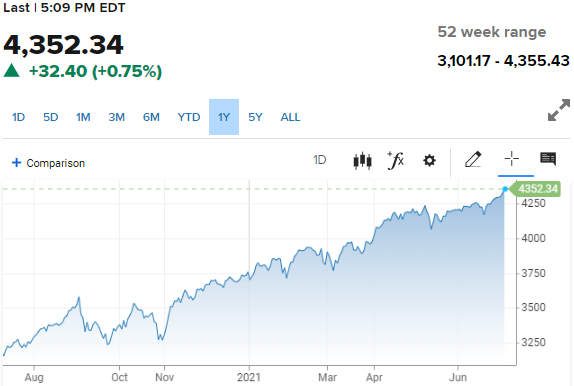 Stocks responded to payrolls in the middle ground of economic policy.

If job creation had been stronger, for instance over one million, credit markets might have begun speculating on an earlier Federal Reserve bond taper. The central bank has been buying $120 billion a month of Treasuries and mortgage backed securities for more than a year, essentially freezing short-term rates. Higher interest rates are the traditional central bank tool to slow economic growth and inflation.

Had payrolls been weaker, say below last month’s 583,000, it would have raised the possibility of higher wage inflation as employers compete to hire reluctant workers.

American growth is not in question. The US economy is expanding at a 7.8% rate in the second quarter in the latest estimate from the Atlanta Fed GDPNow model.

Inflation has more than tripled this year and wage inflation is a major component. Average Hourly Earnings almost doubled to 3.6% in June from 1.9% in May.

The Consumer Price Index (CPI), which represents what households actually pay for goods and services, has jumped from 1.4% in January to 5% in May. The Core Personal Consumption Expenditure Price Index (PCE), the Fed’s elected measure, registered 3.4% in May, its highest annual rate in 29 years.

Treasury rates dropped across the yield curve. The 10-year return shed 5 basis points to 1.431%, its lowest close since March 3. This commercial benchmark has lost 14 points since the FOMC meeting on June 16.

Treasury yields have declined for two reasons. First, although there is considerable suspicion that the jump in inflation has substantial long-term aspects, the bulk of the first half gains are temporary base effects, as the Fed has insisted. If inflation in the second half continues at its current pace, the picture, and the yield reaction will change.

Second, although the Fed’s economic projections did forecast two rate increases in 2023, it left the bond program untouched. Fed Chair Jerome Powell has been careful to provide no clues as to when or under what circumstances the Fed will begin to cut its bond purchases.

Without hints from the Fed, the credit market is not eager to be caught out on a premature sell-off. Bond prices move inversely to yields.

Finally, the Fed’ annual summer conclave at Jackson Hole in Wyoming will be an excellent venue for the Federal Open Market Committee (FOMC) members to begin a discussion of the details of ending the pandemic accommodation. The Treasury market is willing to wait.

The dollar followed Treasury yields lower, losing ground in every major pair on Friday. The EUR/USD  opened at 1.1851 and closed up a very modest 15 points at 1.1866. The USD/JPY dropped almost 50 points, finishing at 111.05. Nonetheless,the greenback was higher in every major pair on the week and for the month.

June’s employment figures bring the job recovery in NFP terms to 15.6 million, 70% of the 22.3 million workers laid off in last March and April's lockdowns.

A sharp and accelerating drop in COVID-19 cases and the success of the vaccination program have most of the country returning to normal life.

The hospitality industry was the largest beneficiary in the June payroll, adding 343,000 positions.

Bars and restaurants hired 194,000 workers, though more than 2 million fewer people are employed than in February 2020.

Manufacturing work rose 15,000. The construction trades lost 7,000 jobs despite the booming real estate and home building markets as supply shortages and soaring lumber futures prices had curtailed new projects. The vast majority of US residential housing is built with timber. The lumber futures gains have since reversed.