The mood of optimism surrounding the expected move towards “phase one” of a US/China trade deal has turned increasingly wary in recent days. Trump’s speech on Tuesday hardly showed the way forward, opting instead to go on the offensive in his rhetoric. Now it seems that a “snag” has been hit. Suggestions are that China is concerned over the one-sided nature of the deal given the significant increase in agricultural purchases (doubling to around $40bn/$50bn per year). China is looking for a get out clauses should relations sour again. This is driving market flow back into safe-haven assets. A decline in Treasury yields has seen US 10 year Treasury yield -10bps off last week’s rebound high. It is difficult to see the rally on equity markets continuing if yields continue to fall. In the forex space, the Japanese yen and Swiss franc are again outperforming, whilst higher beta commodity currencies are pressured. Adding to this caution today we see China data missing estimates across the board as Industrial Production and Retail Sales growth both continue to slide. On a lighter note, German growth beat estimates today as Q3 grew +0.1% and the country narrowly avoided moving into a technical recession. Is this enough to change the mood of caution though? With all eyes on US/China trade, probably not.

Wall Street managed to squeeze out marginal gains yesterday with the SP 500 +0.1% at 3094, but US futures are again on the back foot early today -0.2%. Asian markets were mixed with the Nikkei -0.8% and Shanghai Composite +0.2%. The European markets are looking more cautious, with FTSE futures and DAX futures both around -0.1% lower. In forex, there is very much of a risk-averse bias with JPY outperforming along with a strengthening CHF and USD. The two big stragglers are AUD and NZD. In commodities, gold is finding support again, whilst oil has built further on yesterday’s rebound, adding another half a per cent on suggestions of slowing future US shale supply growth.

It is another packed day of data on the economic calendar. UK Retail Sales (ex-fuel) is at 0930GMT which are expected to show +0.2% monthly growth in October which would improve the year on year growth to +3.4%. Eurozone flash GDP is at 1000GMT which is expected to show quarterly growth of +0.2% in Q3. Later in the session, US PPI is at 1330GMT and is expected to show factory gate pricing pressures reducing, with headline PPI falling to +0.9% YoY (from +1.4% in September), whilst core PPI is expected to drop back to +1.5% (from +2.0%).

It is the second day of Fed Chair Powell’s testimony to Congress and the turn of the House Budget Committee at 1500GMT. As yesterday, Powell’s written testimony is followed by a series of questions. There are also four other Fed speakers to watch for today, all of which have a say in monetary policy. Vice Fed chair Richard Clarida (permanent voter, mild dove) is at 1410GMT along with Charles Evans (voter, mild dove). Then at 1700GMT John Williams (voter, mild dove) speaks, before the former dissenter James Bullard (voter, dove) at 1720GMT.

After a near unchecked bull run of the past six weeks, the rally on the DAX is suddenly looking on more shaky ground. An intraday decline yesterday broke a five-week uptrend and momentum indicators are threatening to roll over. An intraday breach of 13,144 could not be sustained into the close, but the sellers are testing the water now. A MACD bear cross is threatening, and the last two (in July and September) were the precursor to a corrective phase. RSI is also turning back from above 70, meaning a move below 60 would be a bearish confirmation now. It is interesting to see trading volatility is around key lows (c. 95/105 ticks on the Average True Range), which is consistent with market highs in recent months. Yesterday’s candlestick is an uncertain move (closing well off the low, but still negative on the day) but should serve as a warning for the bulls. The recent resistance at 12,300/12,308 needs to be breached to regain positive momentum. However, there is no getting away from the potential for profit-taking which is growing now. A close under 13,144 would open a corrective move back into 12,795/12,985 support. 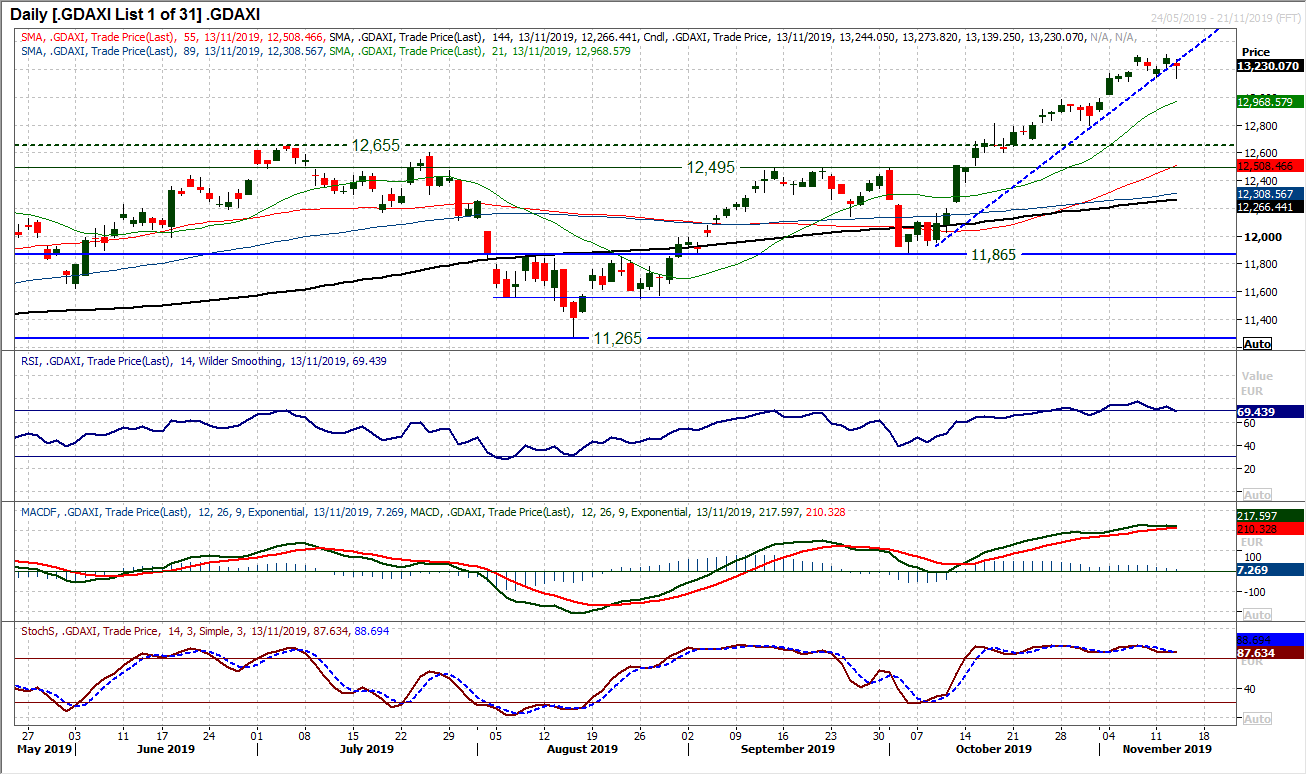 A positive response from the bulls to early weakness yesterday maintains the positive outlook within the trend channel and with WTI as a buy into weakness. Once more the market has returned to trade around the 50% Fibonacci retracement (of $63.40/$51.00) at $57.20. However, more importantly, is the test of near term resistance at $57.85 which has been restrictive for the past couple of weeks. A breakout would re-open the recovery potential again. The 61.8% Fib is at $58.65 whilst the top of the channel is at $59.40 today (which coincides with the next price resistance). The support at $55.75 is strengthening further with a band $55.75/$56.20. Momentum remains positive, and seeing the RSI into the 60s would confirm the bulls getting going again. 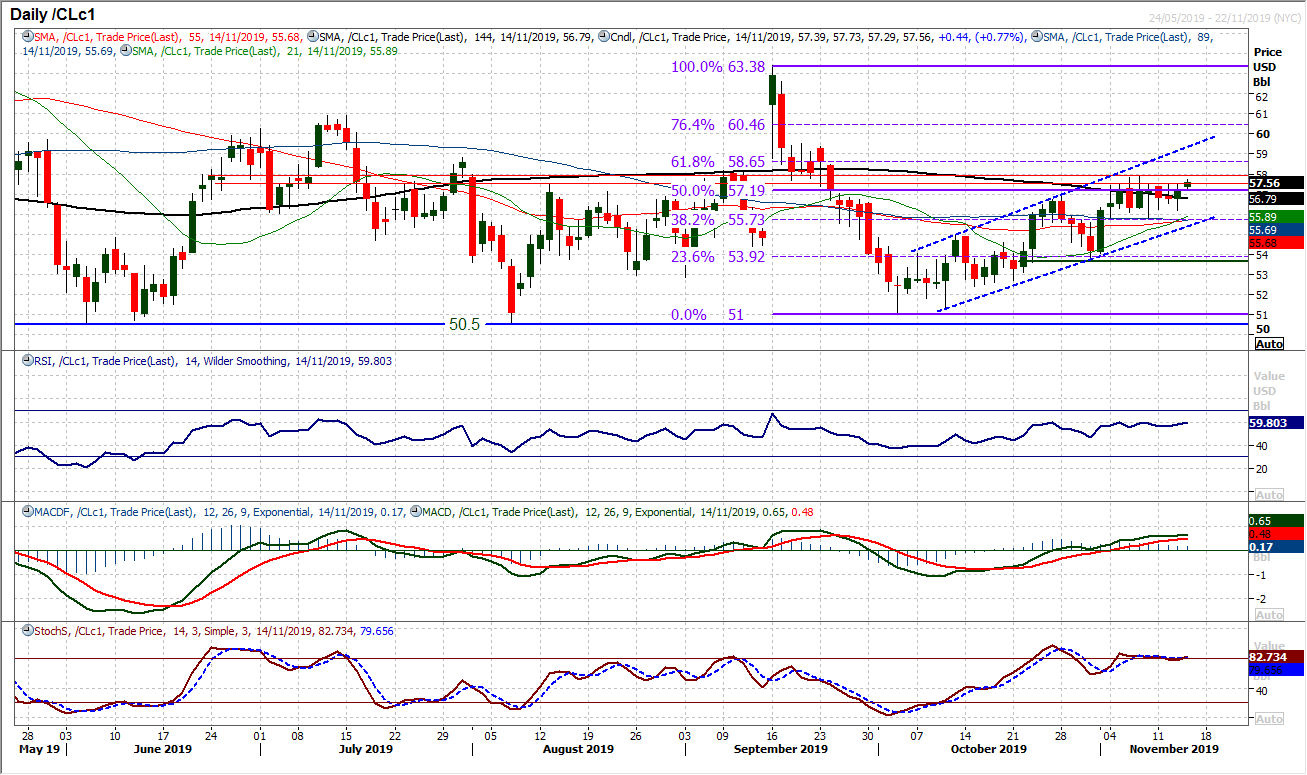 The corrective signals that are threatening on other major equity markets seem to be missing the mark on Wall Street, as the Dow posted a strong positive candle along with another intraday and closing all-time high yesterday. The uptrend which is now six weeks long is intact at 27,528 today whilst momentum remains strongly configured. Just because the RSI is over 70, it should not necessarily mean a reversal is due, however, the run higher looks a little mature on Stochastics (flat) whilst MACD lines are also threatening to plateau. We remain positive on the Dow but still cautious as to how long this run will go without a correction being seen. The breakout support 27,308/27,399 is key, with initial support at 27,518. 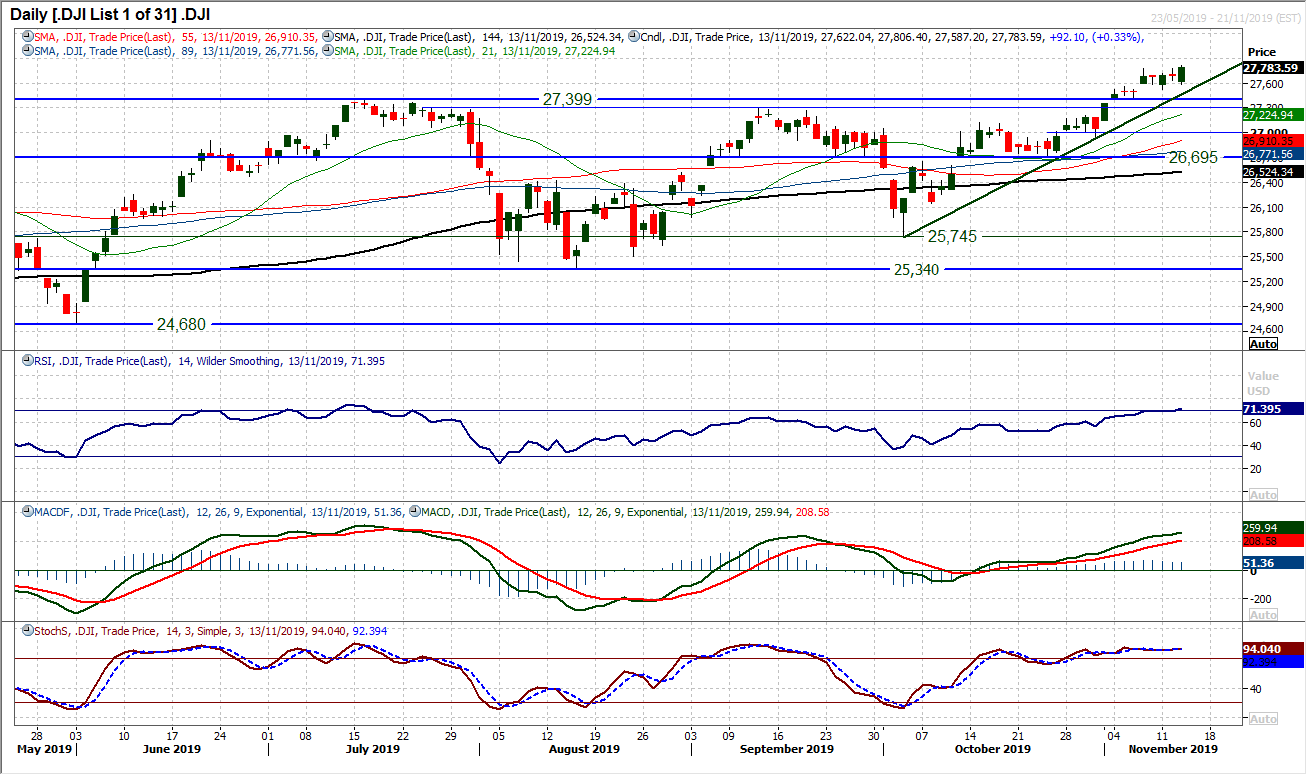