Gold price is under pressure as investors assess the impact of the Omicron variant and the hawkish Federal Reserve. It dropped for the second straight day and moved below the support at $1,800, which was the lowest level since December 22nd. Bitcoin has also declined in the past two straight days. Thin volumes may have contributed to the ongoing weakness in gold and Bitcoin. The decline is also likely because investors are positioning themselves for the eventual tightening of the Federal Reserve. In the previous meeting, the bank committed to implement three rate hikes in 2022 and end its quantitative easing policy.

US futures edged up slightly as the Santa Claus rally continued. Futures contracts linked to the S&P 500 and Dow Jones rose by less than 0.5%. The same trend happened in Europe, where the Stoxx 600 index surged to a record high. On Tuesday, the US reported a record 267k Covid-19 cases, with most of the patients having the Omicron variant. While the number of daily cases has jumped sharply recently, there is hope since only a small number of patients are requiring hospitalization. Also, the number of deaths has not changed dramatically as the number of cases has increased.

The price of crude oil was little changed on Wednesday as investors reflected on the latest inventories data by the American Petroleum Institute (API). The data showed that the country’s inventories had a drawdown of about 3.09 million barrels, which was lower than the previous drawdown of 3.67 million. Analysts were expecting that the drawdown declined to 3.23 million barrels. The Energy Information Administration (EIA) will publish its estimate later today.

The XBRUSD pair has been in a tight range recently as thin volumes remain. The pair is trading at 78.34, which is slightly below this week’s high of 79.35. On the four-hour chart, the pair is slightly above the key support level at 75.47, which was the highest level on December 17th. It was also the neckline of the inverted head and shoulders pattern. It is also slightly above the 25-day moving average. Therefore, the pair will likely keep rising ahead of the OPEC+ meeting. 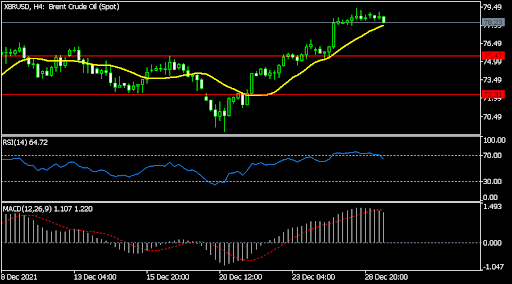 The EURUSD pair declined sharply and then pared back some of the losses today. The pair is trading at 1.1300, which is slightly above the intraday low of 1.1275. On the four-hour chart, the pair is still between the horizontal channel where it has been recently. The price is also slightly below the 25-day and 50-day moving averages while the Relative Strength Index (RSI) has also been falling. Therefore, the pair will likely remain in this range. 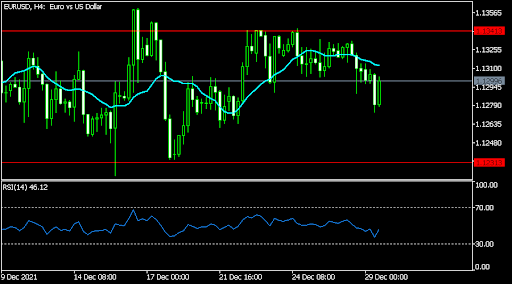 The XAUUSD pair declined to a low of 1,794, which was the lowest level in two weeks. On the four-hour chart, the pair declined below the 25-day and 50-day moving averages while the Relative Strength Index (RSI) has dropped close to the oversold level of 30. It has also moved to the lower side of the rising channel. The pair will likely bounce back and retest the upper side of the channel. 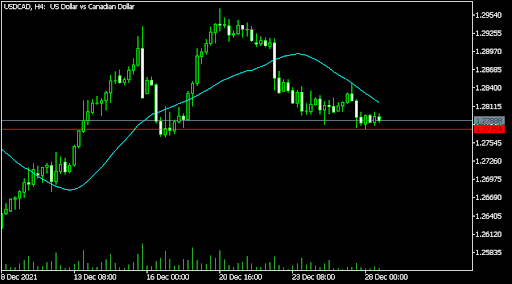 Is this the beginning of the end for bulls?