To taper or not to taper? That has been the question for the Federal Reserve and the dollar, while uncertainty about the UK reopening played a role in moving the pound. US economic releases such as GDP and Durable Goods Orders are set to rock the greenback in the last full week of May.

This week in GBP/USD: Sterling comes out on top amid twin speculation

It does not get more conditional than the wording the Federal Reserve has chosen to hint that tapering of its bond buys is coming – at some point. Nevertheless, the comment about possibly finding the time to discuss the matter by some members was enough to help the dollar recover. Eventually, it proved insufficient to stop cable from posting another week of gains.

The greenback remained on the back foot, mostly due to the more dovish messages Fed officials conveyed – inflation is transitory, and the economy has a long way to go. Speakers seemed to ignore yet another drop in jobless claims and signs of rising prices from the Philadelphia branch of the bank.

On the other side of the pond, the UK loosened several restrictions, but doubts crept in about the final stage due on June 21. While the strain found in India consists of only a small part of overall COVID-19 cases, it is spreading rapidly. At the moment, Britain has only attempted to accelerate its vaccination campaign without stopping the reopening. That has supported sterling. 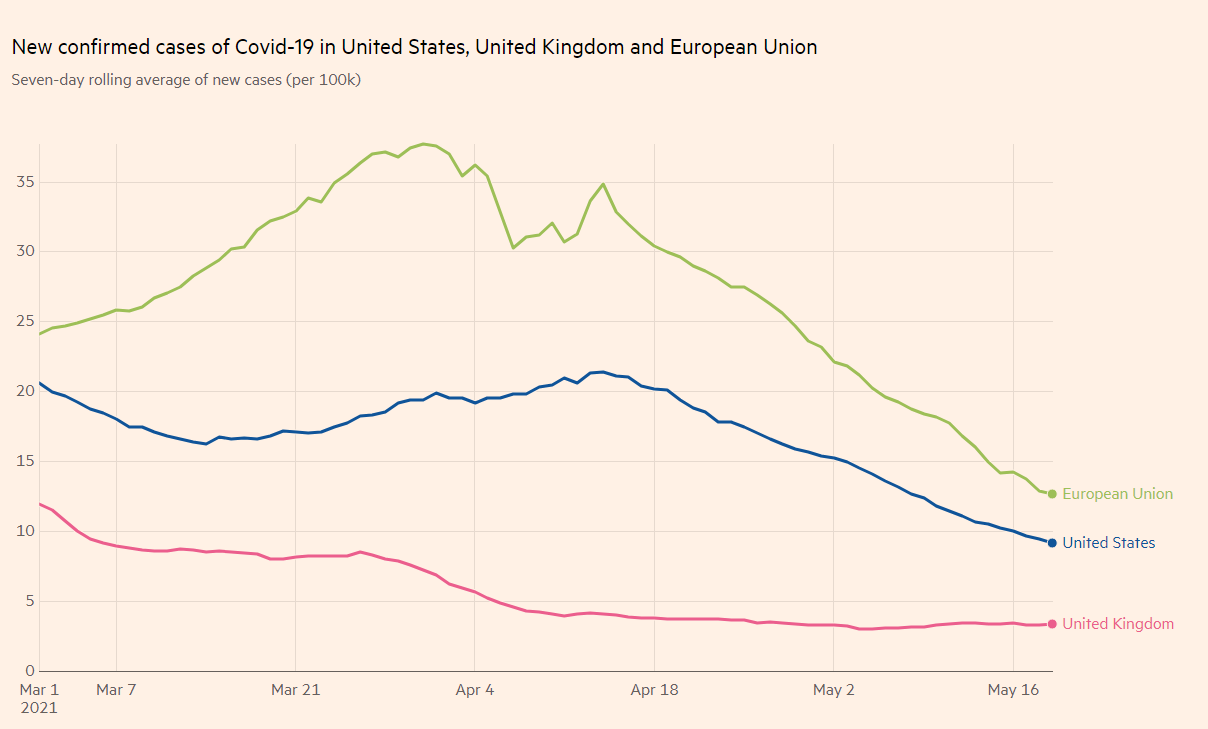 Top-tier economic figures also supported sterling. The Unemployment Rate surprisingly dropped to 4.8% in March, while jobless claims fell by 15,100 in April. The headline Consumer Price Index came out at 1.5% in April, marginally above expectations.

This emergence of the economy from the crisis has prompted Bank of England Governor Andrew Bailey to reject setting negative interest rates. The BOE is more optimistic.

In America, negotiations between Senate Republicans and the White House on infrastructure spending continued at a sluggish pace. The showdown will likely wait until June, and that is when markets would pay attention.

How worrisome is the B.1.617.2 variant? This covid strain is wreaking havoc in India and has also been found in several clusters in the UK. The current evidence that scientists have is that existing vaccines – Pfizer/BioNtech and AstraZeneca are used in Britain – beat the variant. However, its quick spread and uncertainty still threaten to derail the reopening.

The UK is rushing to inoculate as many people as possible. Younger adults have already been asked to get a jab, and the efforts to inject the second dose are also in full force. As long as the lines in the graph below continue rising rapidly, sterling may get a bump as well. 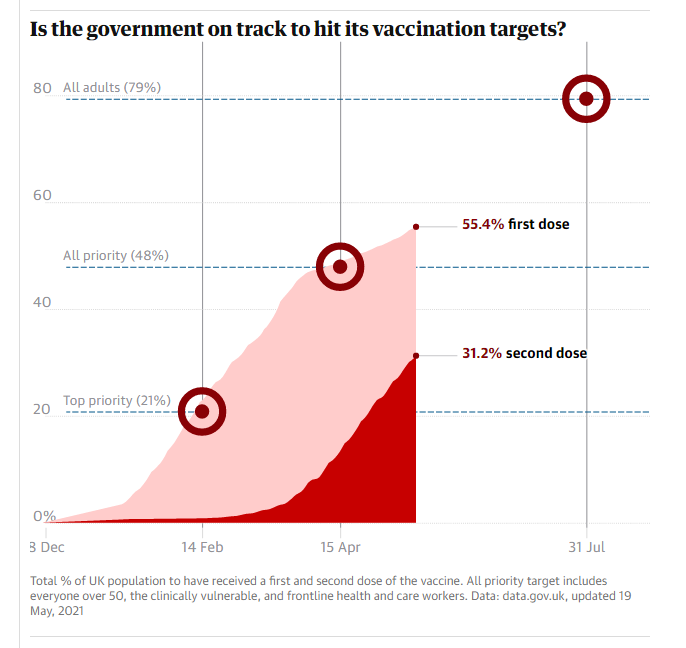 Brexit is at the margins of the headlines, but several issues are yet to be resolved. Any impasse in talks about the services sector could weigh on the pound. In Scotland, the newly-elected Scottish National Party (SNP) wants a new independence referendum, yet the timeline remains unclear. Any new efforts on that front could send sterling down.

The economic calendar is light, with only a speech by the BOE's Silvana Tenreyro scheduled.

Nearly half of the US population, or roughly 60% of adults, have received at least one vaccine dose, but is it enough? Looser guidance on using face masks, the quick reopening, and the setback for Johnson & Johnson's jab are all potential factors in the recent deceleration in inoculations.

Does it risk the recovery? So far, fears in the US are centered on overheating due to the quick return to normal. However, if the chart below continues dropping, the Federal Reserve's "long way to go" mantra may have a louder voice. 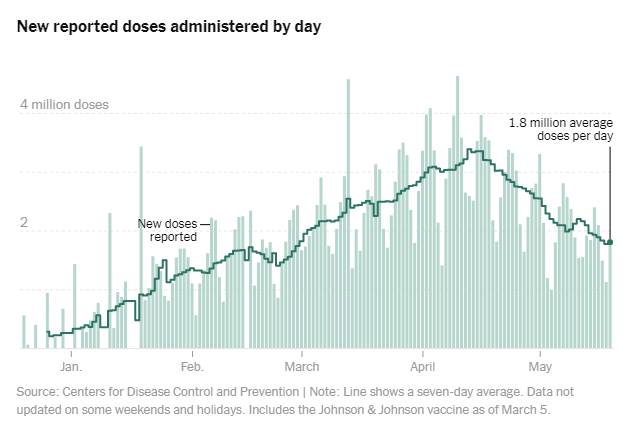 The Fed will have a lot to chew on ahead of the long Memorial Day weekend. Several housing-related releases are scheduled for Tuesday, and they will likely show moderate decreases, albeit from high levels. The Conference Board's Consumer Confidence measure for May is also of interest.

Economists expect updated Gross Domestic Product statistics for the first quarter to upgrade the read to 6.5% annualized – a robust pace. An increase in personal consumption and exports would be welcome, while any drag down by the inventory component would be disregarded. When stocks are depleted in one quarter, they tend to be replenished in the next.

Also on Thursday, the release of Durable Goods Orders data for April could overshadow GDP, especially if the outcome substantially deviates from estimates. A moderate increase is expected. Treasury Secretary Janet Yellen speaks on the same day and could rock markets if she discusses taxes.

A fresh focus on the overheating theme awaits traders on Friday with the release of the Fed's preferred gauge of inflation – the Core Personal Consumption Expenditure (Core PCE). For the first time since 2019, this figure is set to surpass 2% YoY, hitting 2.4%. Any further increase could send the dollar higher, while a tamer result would send it down.

Alongside Core PCE, Personal Income and Personal Spending are also eyed. The last word of the week belongs to the University of Michigan's final read of consumer sentiment. 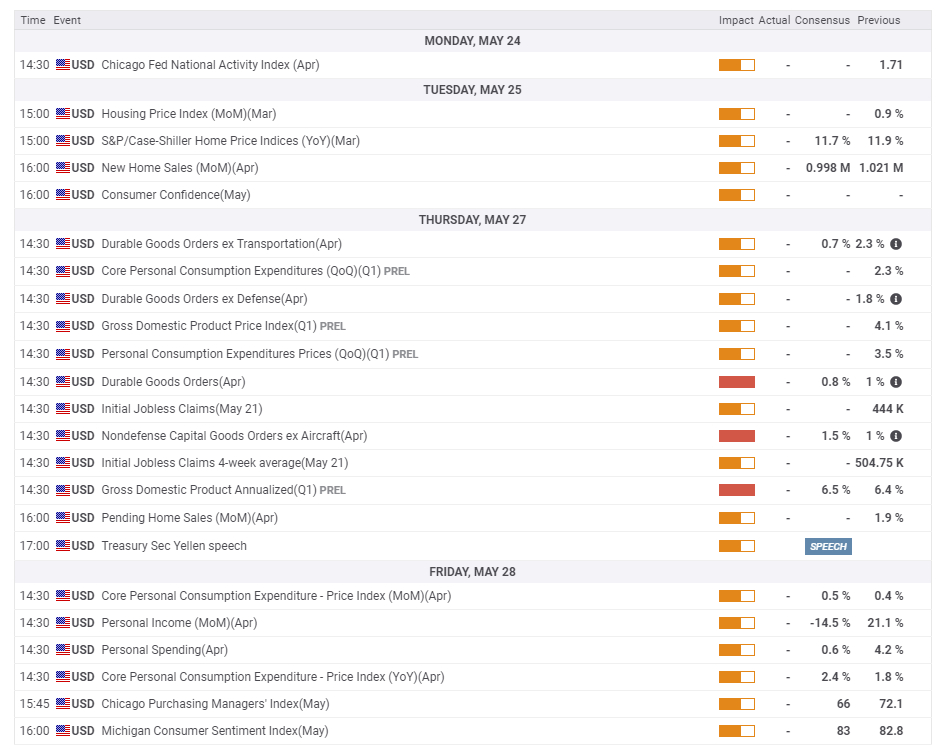 Break or bounce at 1.4240? Cable bulls are in control, and that 2021 high is their greatest challenge. The daily chart shows that the uptrend remains intact, with momentum pointing to the upside and the Relative Strength Index (RSI) still below 70 – keeping a safe distance from overbought conditions.

The May high of 1.4220 serves as the first resistance line, defending the 1.4240 level mentioned earlier. Surpassing that level would put GBP/USD at the highest levels since 2018, with the next target being 1.4365.

Some support awaits at 1.41, which provided an occasional floor in May. The next cushion at 1.4010 is more significant – it is a clear separator of ranges, capping the pair during long weeks before switching to support earlier this month.

Fears of a delay in the UK reopening will likely subside, while bumpy US data may help convince markets that the Fed will find it easier to stick to its dovish stance. Taken together, there is room for more gains for the pair.

The FXStreet Forecast Poll shows that experts foresee cable extending its gains and topping 1.42 in the short term, ahead of a substantial fall in the medium term and a recovery of sorts later on. Average targets have moved up in the past week. 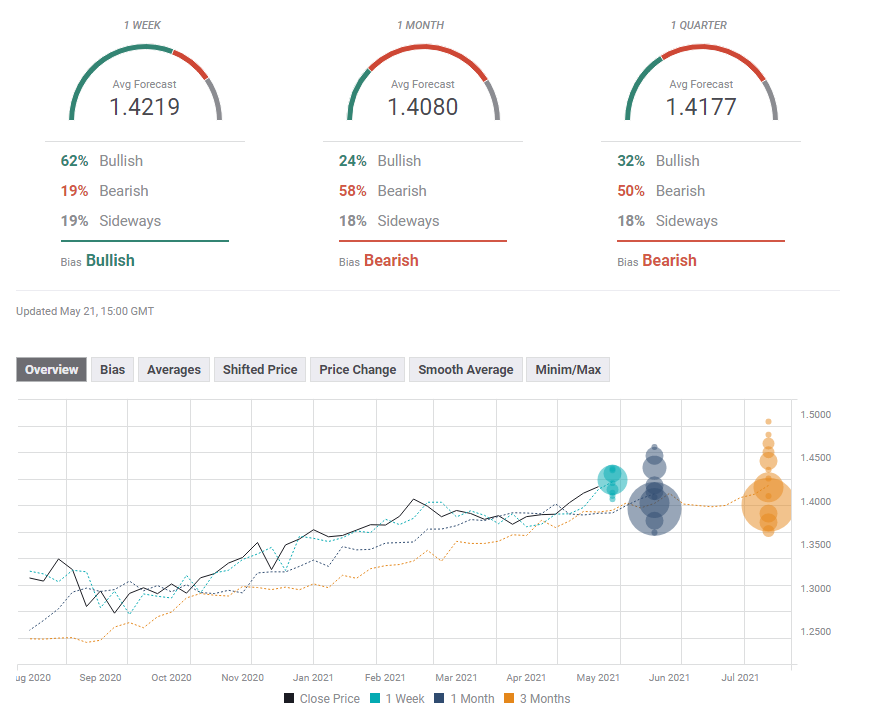