This week in GBP/USD: Chopped by CPI

However, some see softer inflation as a result of a "consumer strike" in response to elevated costs earlier. If that demand disappears forever, it could weigh on the US and global economies. That thinking supported the safe-haven dollar.

On the other side of the pond, prices rose more than expected – UK headline CPI hit 3.2% YoY, above expectations and the Bank of England's 1-3% range.  Sterling shined on the news.

However, there is also a darker side to the rise in UK prices – potential blackouts in the winter. Natural gas prices in Europe and the UK have come despite a mild September so far and ahead of winter. Even without the extreme scenario of power cuts, high energy bills could leave holes in consumers' pockets. That threatens the recovery.

UK Prime Minister Boris Johnson reshuffled his government, but left Rishi Sunak as Chancellor of the Exchequer, calming markets. The PM also decided to expand vaccine coverage ahead of the colder season as UK cases remain elevated, but hospitals are not suffering significant pressure. Britain's vaccination rate is higher than that in the US, which impacts the number of severe cases. 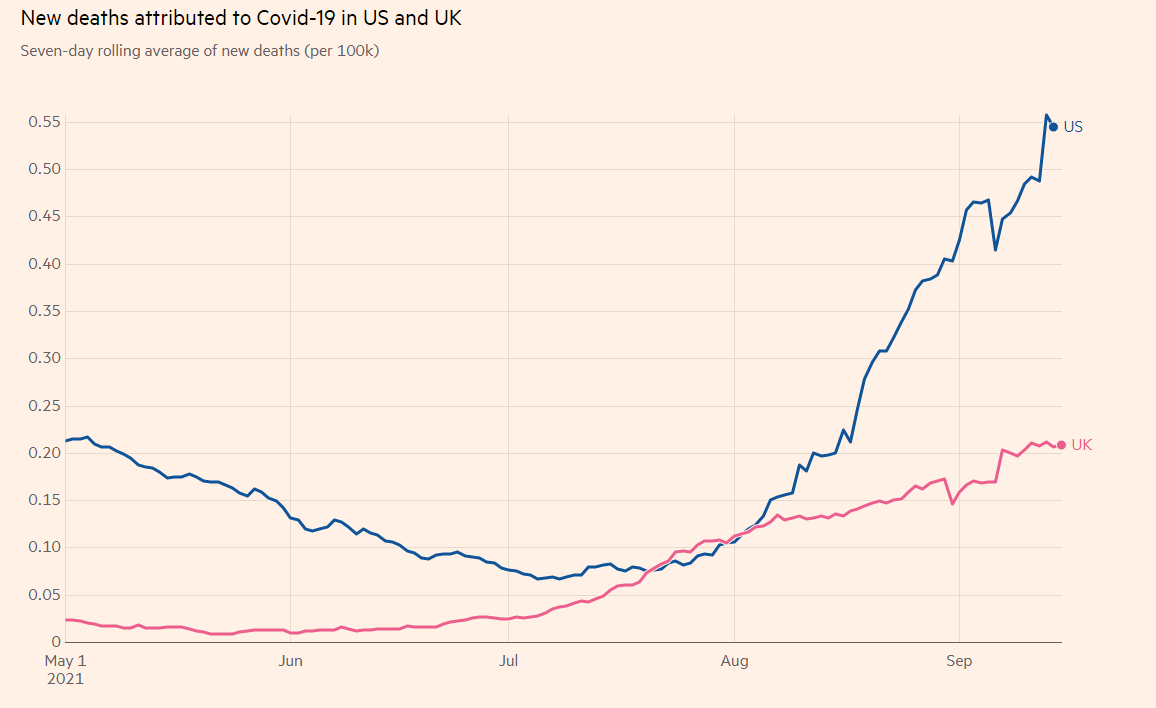 US Politics:  Talks about infrastructure spending remain stuck in Congress, as conservative and progressive Democrats tussle over the details. The EU and the UK remain at odds over the Northern Irish protocol, but it had little impact on the pound.

How many BOE members support withdrawing stimulus? In August, two members voted in favor of tapering down bond buys, and their number could grow. Bank of England Governor Andrew Bailey told MPs that the Monetary Policy Committee was split 4:4 on whether conditions were met to raise rates.

The Meeting Minutes will reveal current trends within the MPC and shake the pound, especially if Bailey seems to be cornered by a growing chorus of hawks.

Rising inflation and a falling unemployment rate – 4.6% as of July – may push the London-based institution to signal rate hikes are coming sooner rather than later, even if the BOE is unlikely to announce any policy change at this juncture. Hints toward November's "Super Thursday" decision will be closely watched.

US events: All eyes on the Fed

When will the Federal Reserve taper its $120 billion/month bond-buying scheme? A September taper – aka "Septaper" – is off the cards, but an announcement in the next meeting is undoubtedly in play.

There are other questions. Will it come in November or in December? What would the pace of tapering be? When will the Fed raise interest rates?  Fed Chair Jerome Powell will preside over a closely watched decision and will likely err on the side of caution given his dovish tendencies and weaker data of late. Softer inflation seems to vindicate his stance that price rises are transitory.

The bank also publishes new growth, inflation, employment and interest rate forecasts. After surprising markets by projecting two rate hikes in 2023, the Fed is unlikely to rock the boat this time. Powell's words will likely have more impact.

See: Fed Preview: Three ways in which Powell could down the dollar, and none is the dot-plot

Expectations toward the Fed, the decision and the long response to the event overshadow other developments. Nevertheless, housing figures and Markit's Purchasing Managers' Indexes are also of interest.

On the political front, President Joe Biden's infrastructure spending bill is moving along slowly, as Democrats are split on how to move forward. Lawmakers also have to grapple with reaching the debt ceiling. Government shutdowns had little impact on markets in the past, and the US averted missing its debt obligations. Nevertheless, without a resolution, the ceiling could turn from a non-event to a high-stakes one.

US covid cases remain elevated but are already off the highs. Vaccine mandates have yet to increase jabbing, and the US lags behind European countries in immunization. 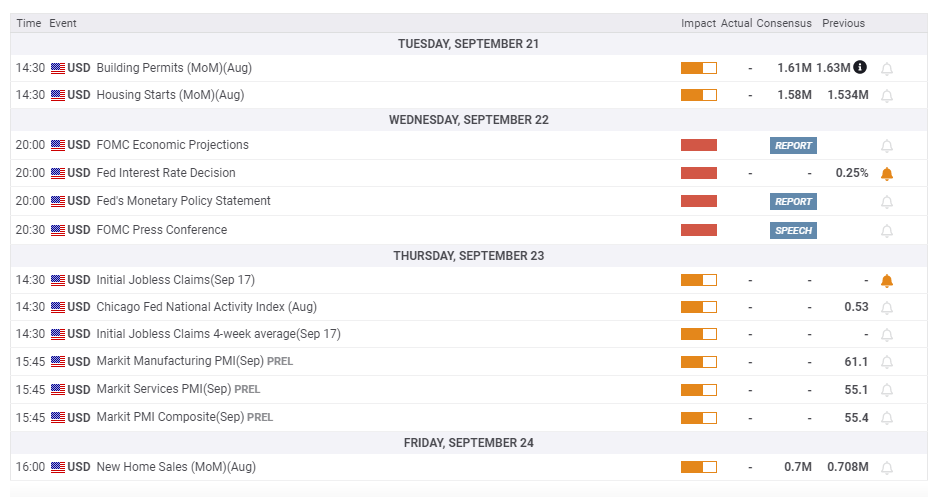 Pound/dollar has retreated from higher levels, but indicators remain well-balanced. While the currency pair slipped under the 50-day and 200-day Simple Moving Averages (SMAs) on the daily chart, momentum turned to the upside.

Two significant lines characterize cable trading. The upper end is 1.3910, which is where the 100-day SMA and September's peak converge. The lower end is 1.3570, July's low point.

A defensive Fed and a hawkish tilt from the BOE could trigger a rally.

The FXStreet Forecast Poll is showing investors are undeterred by the recent slide and foresee gains on all timeframes. The bullish trends persist despite minor downgrades to the average targets. 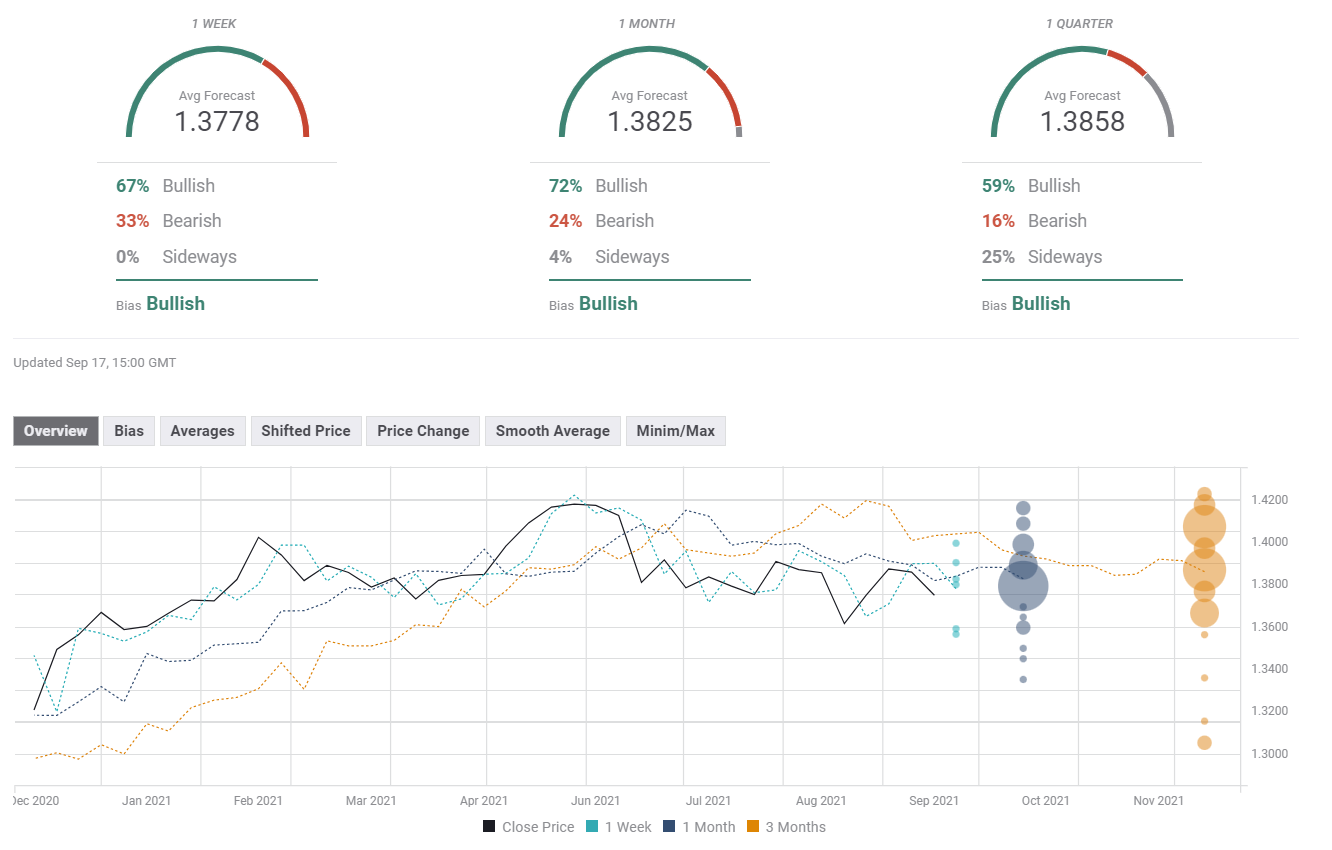 EUR/USD recovers toward 1.0900 in quiet session

EUR/USD has managed to stage a rebound toward 1.0900 in the European morning after having edged lower during the Asian trading hours. Ahead of the PCE inflation data, however, the pair is having a difficult time making a decisive move in either direction.

GBP/USD gained traction and erased a portion of its daily losses in the European morning. Nevertheless, with the cautious market mood helping the US Dollar hold its ground against its rivals ahead of the PCE inflation data, the pair continues to trade below 1.2400.

Gold remains on the defensive around $1,925 ahead of US PCE

Gold price trades with a mild negative bias for the second successive day on Friday and hovers around the $1,925 region during the early European session. The intraday downtick, however, lacks follow-through, warranting some caution before positioning for a deeper corrective pullback from a nine-month peak touched the previous day.

US December PCE Inflation Preview: Is there room for further US Dollar weakness? Premium

The US Bureau of Economic Analysis will release the Personal Consumption Expenditures (PCE) Price Index data for December, the Federal Reserve (Fed) preferred gauge of inflation, on Friday, January 27 at 13.30 GMT.