Price rises look transitory, but worries remain – US inflation figures showed a much-needed cooldown, but hopes of a delay to Fed tapering were offset by fears of stagflation. The central bank will now have its word and shake all markets. The runup to Germany's elections, data and covid news are also of interest.

Team Transitory wins? The US Core Consumer Price Index dropped to 4% YoY in August, more than expected, showing that the jump in inflation was transitory due to the reopening. The news only temporarily downed the dollar, as some think the fall in prices results from lower demand due to elevated prices – stagflation. The jury is still out.

Shopping spree: Good news for the US economy came from Retail Sales statistics for August, which showed an increase of 0.8% instead of the decline that economists had expected. Core figures were also upbeat. This hard data contrasts with weak consumer sentiment figures and shows that demand is still resilient.

Nevertheless, the Goldilocks scenario in which corporates benefit from economic growth and price pressures wane failed to impress Wall Street, which remained in a downbeat mood. That supported the safe-haven dollar.

ECB dovishness: Isabel Schanel, a German member of the European Central Bank, said that inflation will significantly decrease early next year "in all likelihood." Bankers from Europe's largest country are usually the most inflation-averse ones, given the country's 1920s hyperinflation. Schnabel's words weighed on the euro.

On the other hand, the Financial Times reported that ECB Chief Economist Phillip Lane privately told bankers that a rate hike could come within two years. The upswing in the euro ended when the bank denied the report.

German election uncertainty: Less than two weeks before the race to succeed Angela Merkel concludes, opinion polls continue showing center-left candidate Olaf Scholz in the lead. While he is considered a safe pair of hands as finance minister – and more experienced than Armin Laschet, Merkel's successor at the ruling CDU party – Scholz is open to a coalition with the hard left. That is worrying investors.

Coronavirus: European COVID-19 cases remain at low levels – or continue falling – while the US struggles with elevated infections. That implies better growth potential, as even without restrictions, consumers remain shy when the disease is circulating rapidly.

Europe has a clear covid advantage: 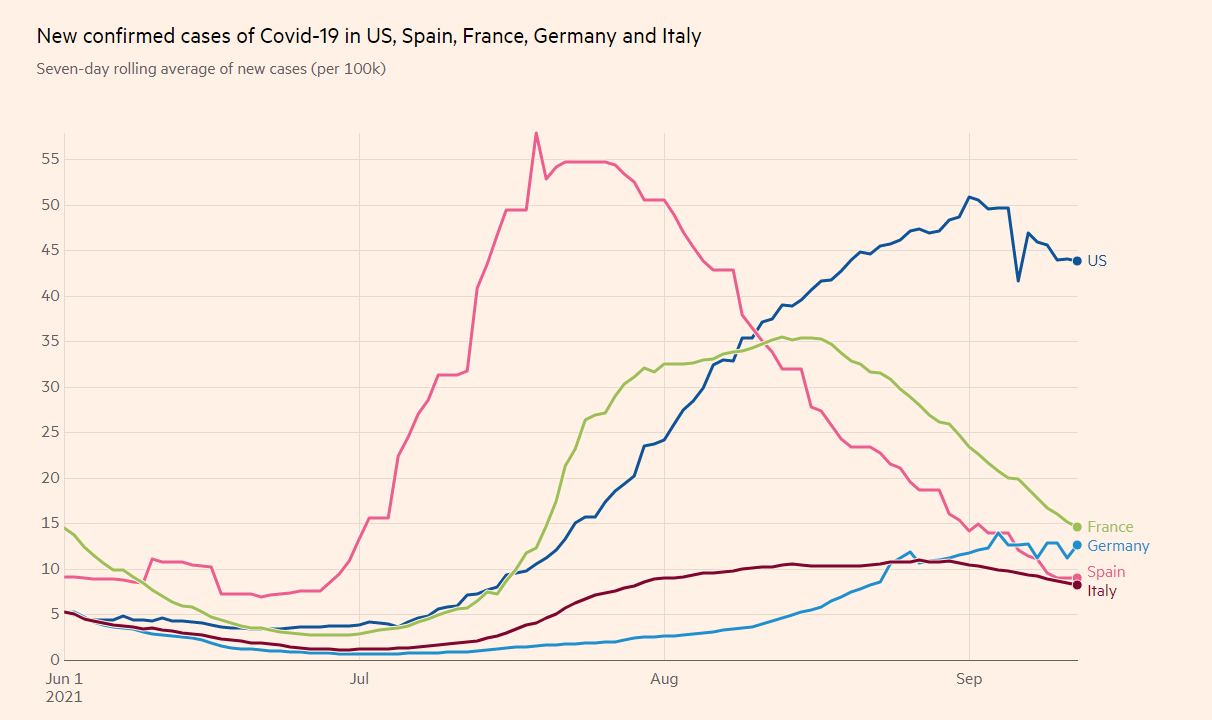 Leading Europe: For the first time in some 19 years, Angela Merkel is not on the ballot to lead Europe's largest economy. The September 26 elections will determine her successor, and it could be her current finance minister Olaf Scholz – which comes from her center-left SPD party.

While investors would prefer Armin Laschet, the new lackluster leader of her CDU/CSU party, to initiate more business-friendly policies, a "traffic-light" coalition led by Scholz that includes the Greens and the liberal FDP would provide some comfort.

Worse scenarios are a fragmented and unworkable parliament or a left-leaning coalition. Contrary to the US, opinion polls have shifted substantially ahead of the vote, adding uncertainty. Euro bulls will want to see surveys providing clarity in the last days before the vote. 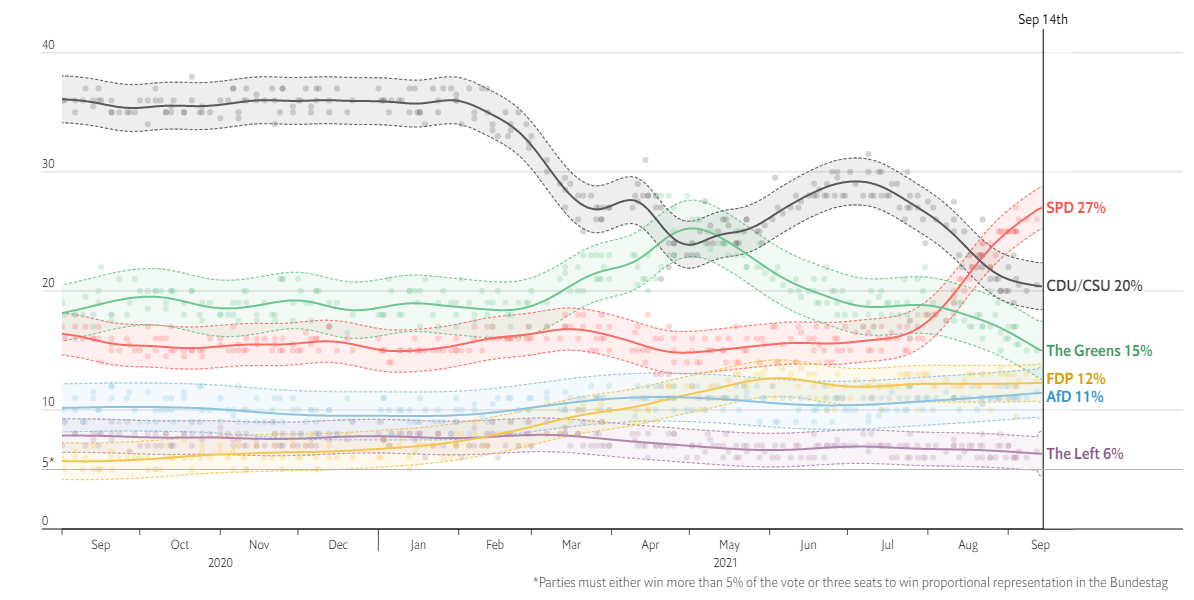 The most important publications come on Thursday – Markit's preliminary Purchasing Managers' Indexes figures for September. Shortages, worries about inflation and uncertainty about China's economy could push it down. On the other hand, Europe's better covid situation and support from central banks could boost morale. 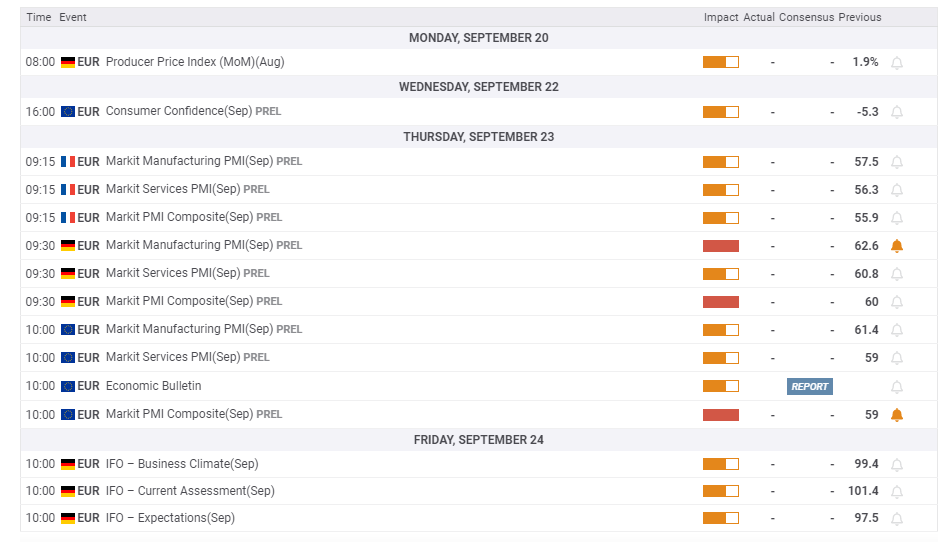 When will the Federal Reserve reduce its $120 billion/month bond-buying scheme? That has been the main question for markets in the past few months, and some clarity may come in September. The bank publishes new forecasts, aka "the dot plot."

The Fed is unlikely to announce a policy change after Chair Jerome Powell refrained from doing so in his critical Jackson Hole speech. However, hints about a move in November or December would make the difference for markets.

Investors will also be eyeing the link between tapering and rate hikes, the bank's views on the economy after recent data, and more.

See: Fed Preview: Three ways in which Powell could down the dollar, and none is the dot-plot

Infrastructure: How much of the White House's $3.5 trillion plan will make it through? President Joe Biden is struggling to keep conservative Democrat Joe Manchin on the same ship as progressive members of his party. Investors would like to see more spending but fewer taxes that would weigh on corporate profits.

Moreover, lawmakers also need to solve the debt ceiling issue that could also wreak havoc. So far, markets have been shrugging off political developments, but they could do so if there is risk of a US government shutdown.

Covid cases have begun rolling over in the US but remain high. The increase in the pace of vaccinations is encouraging, but its sustainability remains questionable. The chart below can provide some clues about the chances of exiting the pandemic. 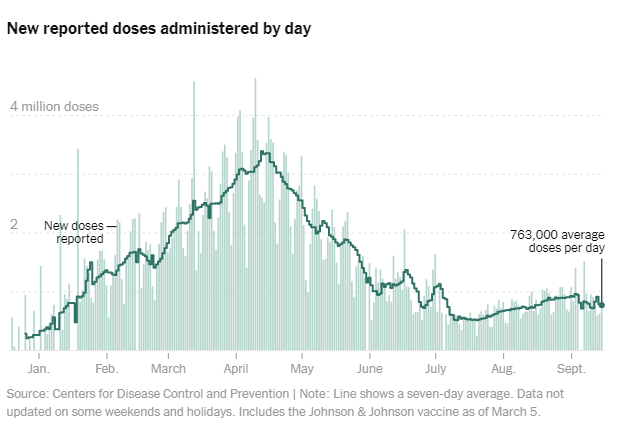 The Fed decision outshines other developments, but housing figures early in the week could provide insights into the steaming hot construction sector. Markit's preliminary PMIs for September are also of interest. 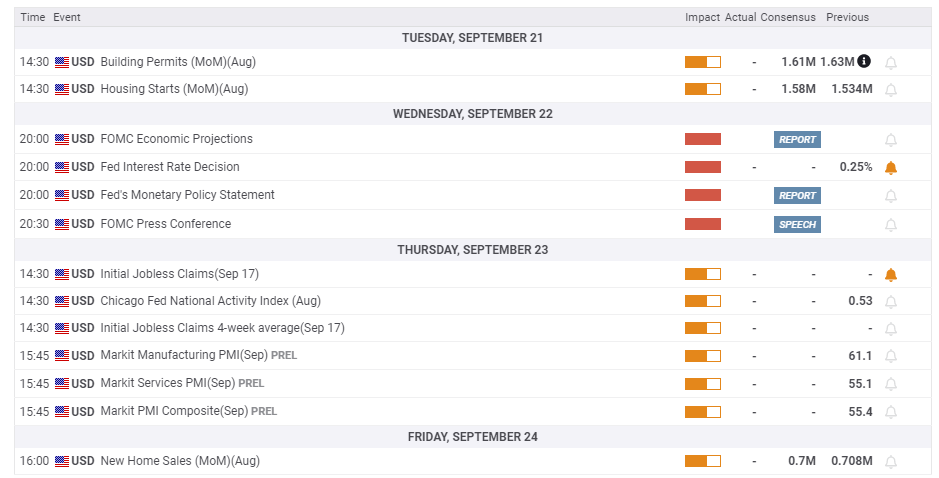 Euro/dollar has been looking for a direction, and while there are two clear battle lines, the direction remains unclear. The 1.17 level provided support twice in recent months and was only breached during a short time in August. On the upside, 1.1910 capped EUR/USD twice and remains a critical barrier.

On the one hand, momentum on the daily chart is to the upside. On the other hand, the pair slipped under the 50-day Simple Moving Average (SMA) and remains well below the 100 and 200-day SMAs. A breakout of the 1.1700-1.1910 range would be more telling about the trend.

Fed Chair Powell is a dove, and this fact seems to be sufficient to expect longer accommodation from the Fed, which means a weaker dollar. Tensions ahead of Germany's election are unlikely to spoil the rally.

The FXStreet Poll points to an extension of the sell-off in the short-term and an upswing in the medium and long terms. Nevertheless, it is essential to note that the average outlooks have been downgraded for all timeframes. 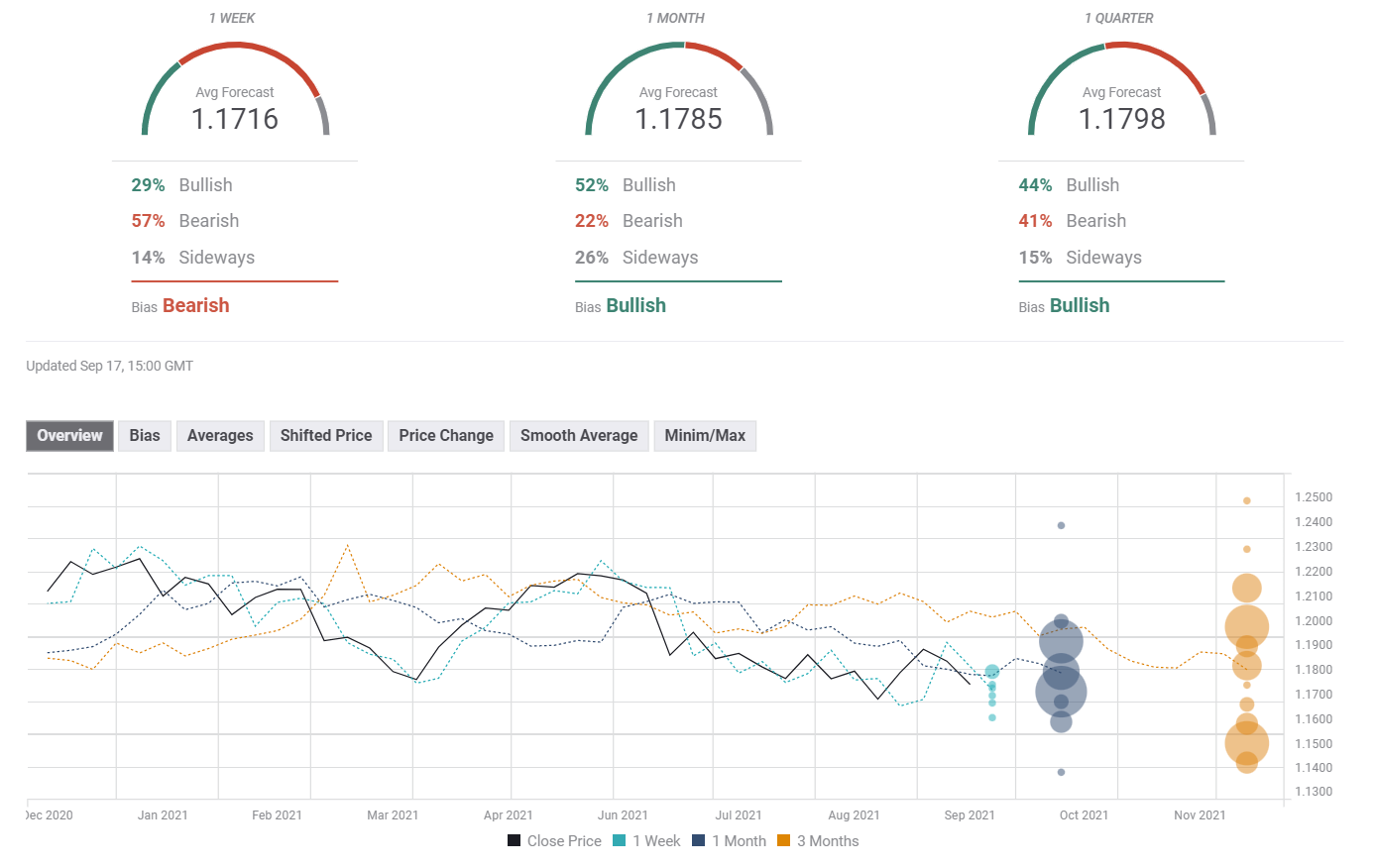