King Dollar reigned supreme, almost regardless of bond yields and some Fed caution. Top-tier US consumer data and Britain's jobs report are now eyed – alongside growing fears of the Delta variant on both sides of the pond.

This week in GBP/USD:

UK reopening: Prime Minister Boris Johnson announced that the UK would fully reopen on July 19, scrapping hundreds of COVID-19 restrictions. This "bonfire" of rules and prospects of a return to normal temporarily boosted the pound.

However, doubts about the feasibility of the move persist, as coronavirus cases continue rising in Britain – mostly related to the Delta variant first identified in India. Criticism from the opposition and health experts weighed on sterling. 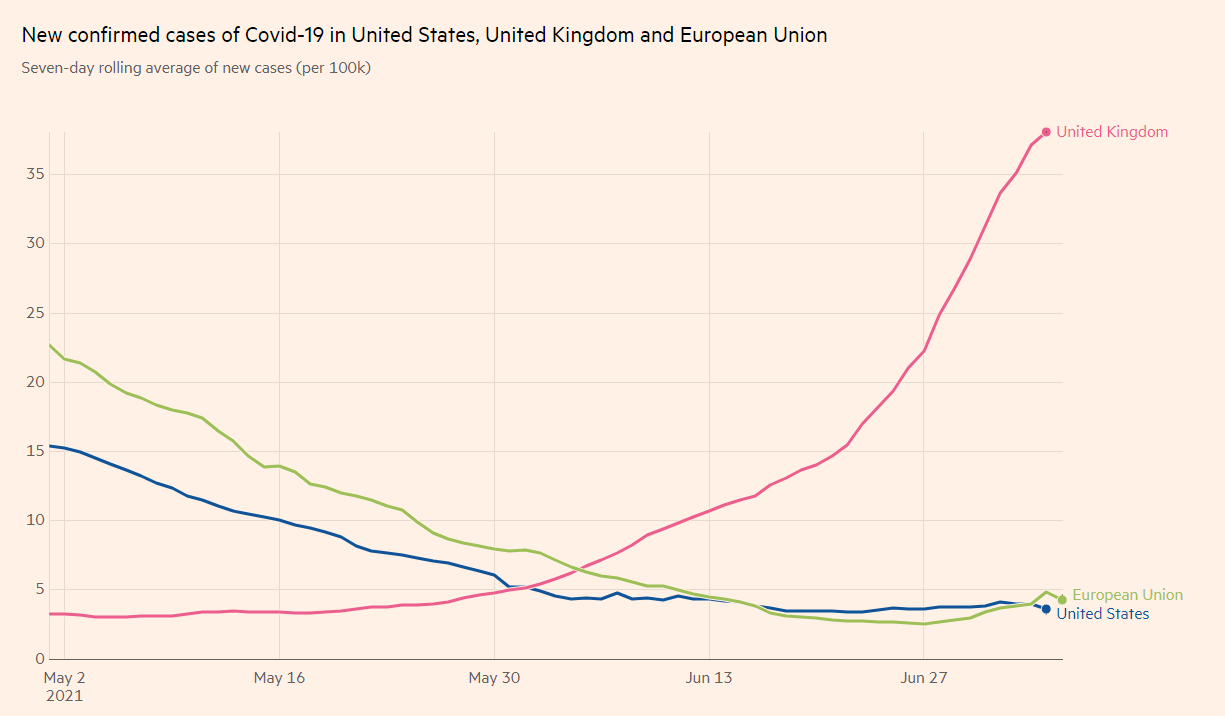 The US Center for Disease Control & Prevention (CDC) warned of the rapid spread of Delta in some areas of the US where vaccination rates are low. Investors are paying somewhat more attention to the risk of another covid wave in America.

Britain reported an increase of 0.8% in Gross Domestic Product in May, roughly half what economists had estimated. Industrial output also fell short of expectations.

Other factors weighing on sterling were a threat from the EU to bring the UK to court over implementing the Northern Irish protocol and the Bank of England's dovishness from mid-June.

According to its meeting minutes from the June decision, the Federal Reserve also seemed to err on the side of caution. While members acknowledged that inflation could be more persistent, they seemed to be in no rush to taper their bond-buying scheme. The more nuanced message only temporarily halted the dollar.

Downbeat US data: The greenback's ascent came not only despite lower US yields but also in defiance of unimpressive data. The ISM Services Purchasing Managers' Index came out at 60.1 points, significantly below estimates and pointing to a cooldown in America's largest sector.

Will PM Johnson stick to his promise to reopen the economy? That heavily depends on covid cases, which hinge also on Britain's efforts to reach as many people as possible with first and second vaccine doses. Over half of the population is now fully immunized, yet the rapid spread of the Delta variant means more needs to be done.

The aim is to reach all adults – roughly 80% of the population – with one dose by the July 19 reopening date. 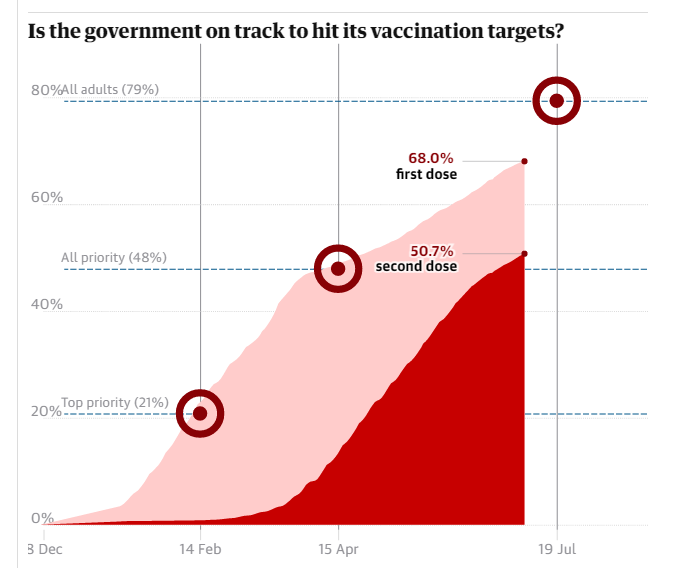 Brexit-related comments may keep appearing, yet the pound has shown resilience to lingering issues. Significant decisions are unlikely until September when all European officials return from their summer holidays.

The highlights of the economic calendar are two top-tier publications. On Wednesday, investors will eye the Consumer Price Index (CPI) data for June. Inflation surprised to the upside in May with a jump from 1.8% to 2.1% YoY.

Nevertheless, that figure was driven higher by base effects – the fall in prices that time last year. Moreover, the BOE's dovishness also implies inflation is unlikely to surge.

On Thursday, the UK releases employment figures, which will likely remain upbeat. The Unemployment Rate surprised with a drop to 4.7% in April, and a similar low level is likely for May.

On the other hand, wage growth may have cooled from the robust 5.6% increase recorded in April. Jobless claims for June probably dropped as well, similar to the 92,600 slide printed in May. 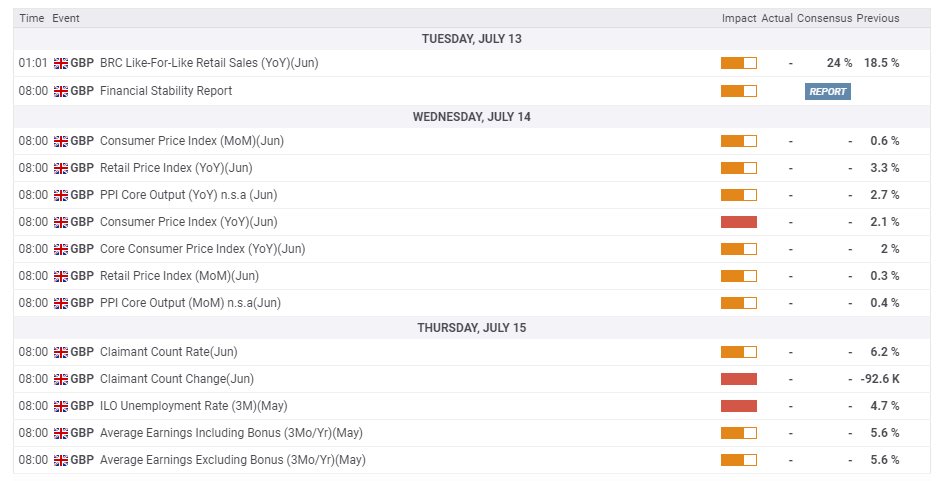 US events: Consumer in the spotlight

Will the Delta variant dent US economic growth? The highly transmissible strain has already landed in America, and many remain unvaccinated. President Joe Biden's aim to reach at least 70% of adults with one jab by July 4 came and went, and among the 68% of those over 18 years of age who have received one shot, many still lack the second dose needed to protect against Delta. States vary widely in immunization levels.

Investors will be following case numbers – which seem to have bottomed out – and also await a pickup in vaccinations. 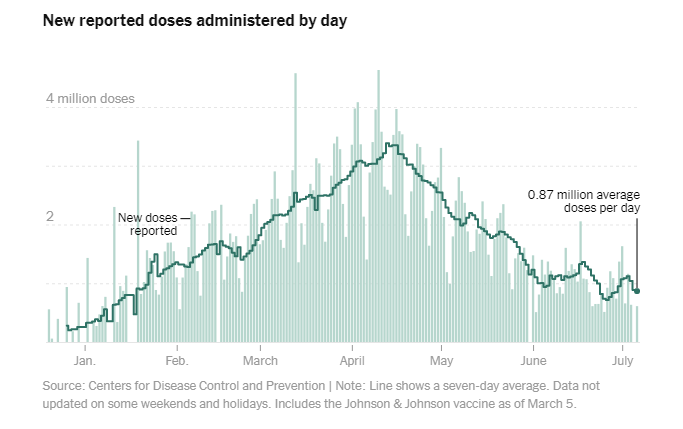 Congress is set to draft its infrastructure spending bill, yet the pace will likely remain sluggish, and therefore on the backburner. However, if it moves forward swiftly, markets would cheer the development.

Is inflation transitory or not? Headline CPI hit a high of 5% in May, beating estimates and spooking investors. The Fed also responded to such indications of rapid inflation as a sign that prices could become more sticky and persistent. June's figures will serve as a test of that theory.

Base effects have probably eased in pushing annual inflation higher, and that could result in softer data. Core CPI hit 3.8% in May – far above the Fed's 2% target – and is now eyed. Monthly figures are also of interest.

Wednesday's producer price statistics for June are also of interest, as some see them as a forerunner for consumer price data later down the line. The Fed's Beige Book  – a collection of anecdotal evidence from the bank's contacts – may also move the dollar, especially if it points to high inflation.

Thursday's weekly jobless claims will likely be dismissed by investors unless it is a shocker, and especially as tension would already be mounting toward Friday's Retail Sales data. The consumption-centered US economy has seen a disappointing drop in both headline sales and the Control Group – aka "core of the core" – back in May.

Economists expect moderate increases in both figures, which also shape overall growth estimates. The last word of the week is related – the University of Michigan's preliminary Consumer Sentiment Index for July is projected to advance from June's 85.5 points, yet remain below pre-pandemic levels. 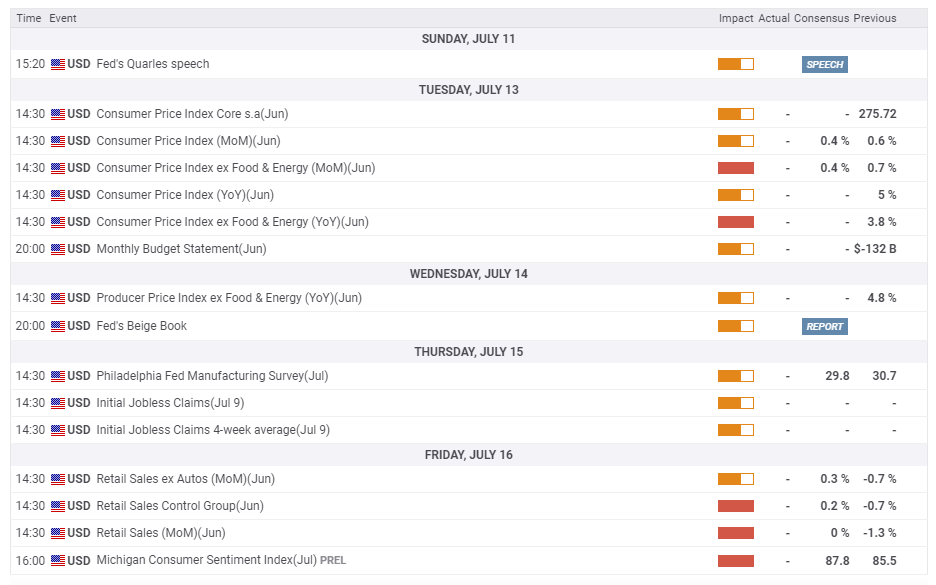 Pound/dollar continues suffering from downside momentum on the daily chart, and the Relative Strength Index (RSI) is still above 30 – thus outside oversold conditions. That implies there is more room for the downside.

Critical support awaits at 1.3670, which is where the all-important 200-day Simple Moving Average (SMA) converges with a double-bottom formed on the graph earlier in the spring. It is backed up by 1.3735, the July trough.

It is hard to argue against more falls for the currency pair. The Delta variant is a win-win for bears – weighing on sterling by threatening the reopening and boosting the safe-haven dollar. Moreover, data may miss estimates, strengthening the gloomy notion for one more week.

The FXStreet Forecast Poll is showing that experts see the current slide as temporary. They expect GBP/USD to hold onto its late-week recovery, gradually advance and retake the 1.40 level in the long term. 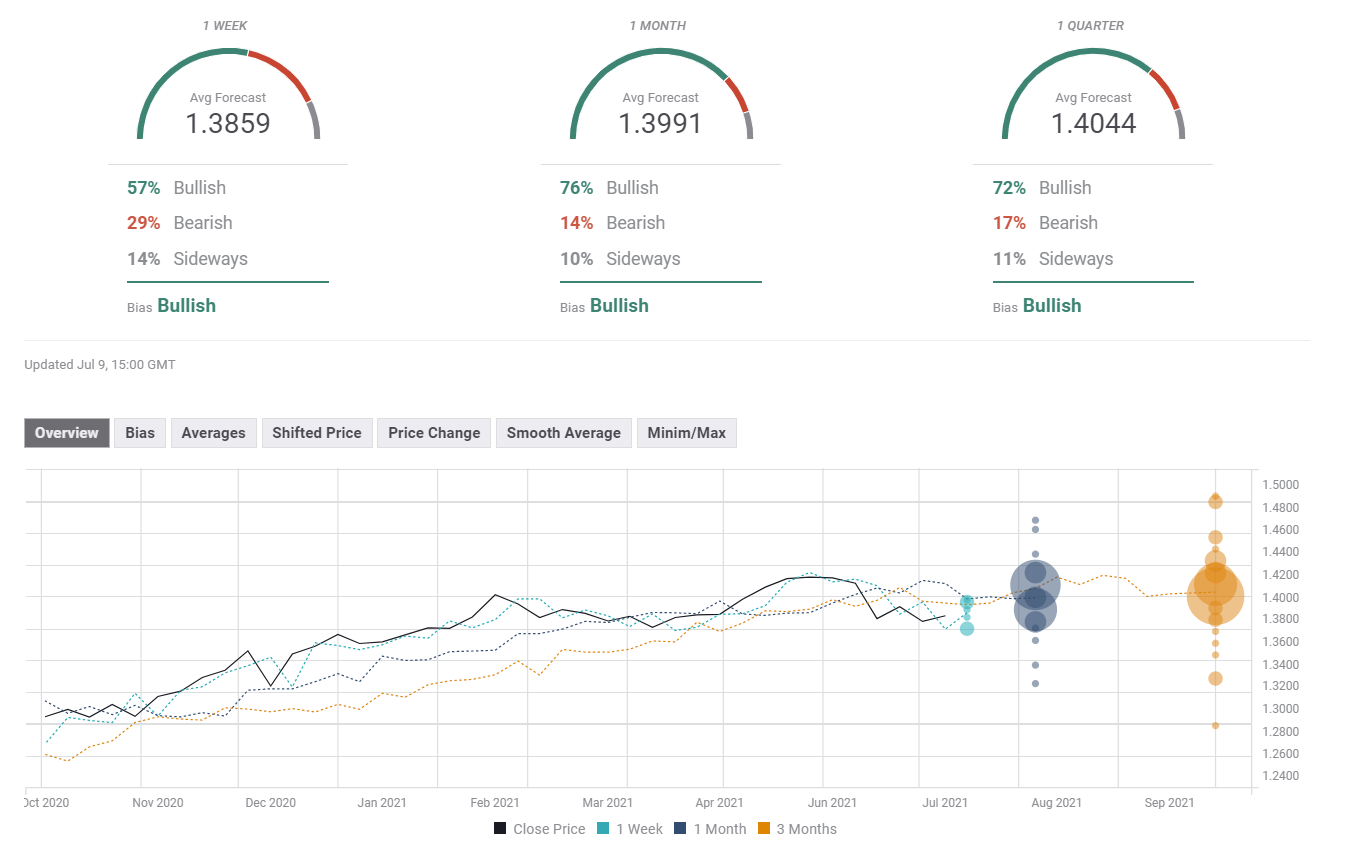