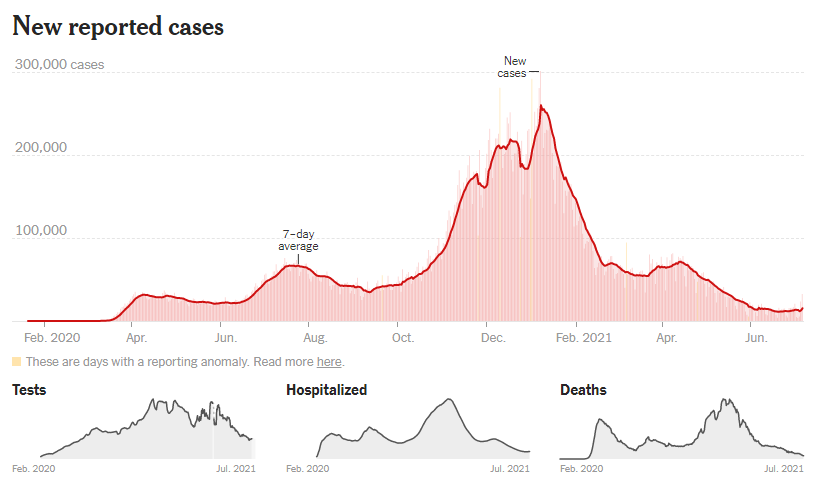 Admissions to hospitals and mortalities are at their lowest since the pandemic broke out, giving many the sense that the crisis is over. Markets have been concerned about demand outstripping supply, causing overheating and runaway inflation. Even the generally dovish Federal Reserve has recently changed tack and has begun preparing markets – sloshed with cash – for a withdrawal of some support.

However, the picture could change quickly – at the speed that the Delta covid variant spreads. The strain initially identified in India has caused a deadly wave in the world's most populous country, resulting in desperate scenes of people vying for oxygen supplies. That was in April, and India has since recovered.

Delta has made its way through Asia, inflicting damage on countries hitherto skipping the worst of coronavirus, such as Thailand, Malaysia and Indonesia. Japan has announced the Tokyo Olympic Games will have no spectators. 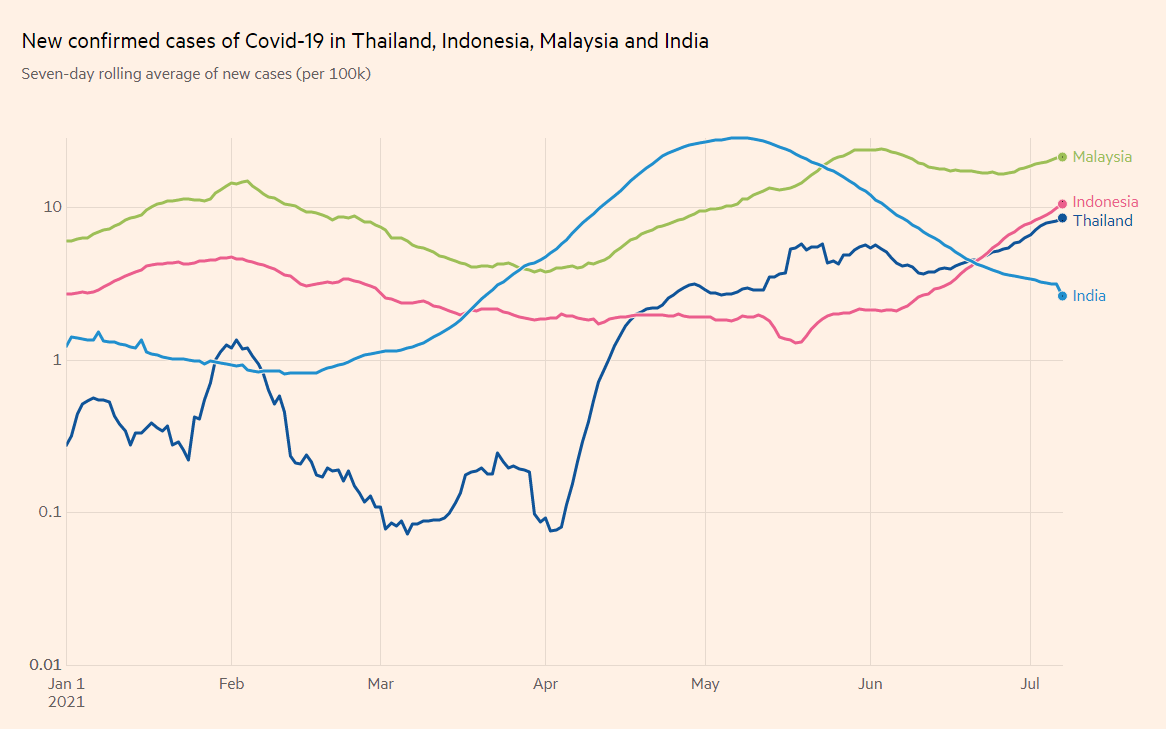 The virus and its variants respect no borders – and Delta made its way to Britain from its former colony in the spring. British scientists were able to identify that this strain has a Reproduction rate of 8 among the unvaccinated populations which are under no restrictions. That compares to 2.5 for the original virus and somewhere around 5 for the Alpha variant, aka the British one.

Moreover, UK studies have shown that receiving one vaccine dose provides only limited protection against Delta, contrary to the previous strains. At the time of writing, around 68% of Brits have been jabbed once and 51% are fully vaccinated. That has resulted in far lower levels of hospitalizations and deaths from the virus, despite a surge in cases. 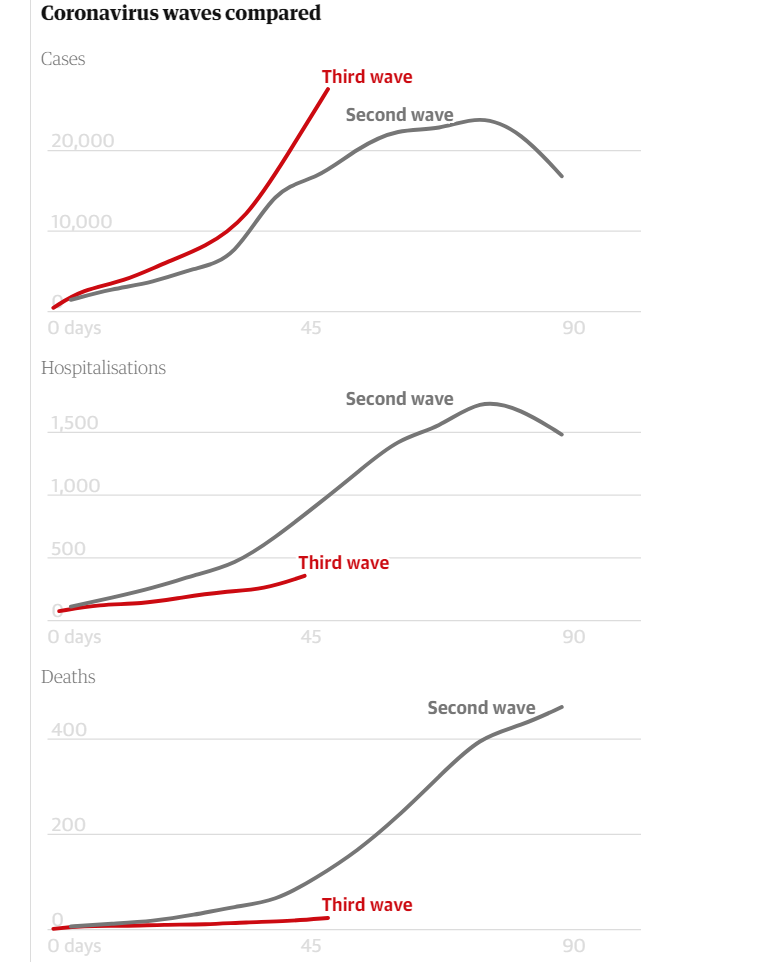 That has led UK Prime Minister Boris Johnson to announce the scrapping of almost all covid-related limits on July 19 – aka "Freedom Day." Nevertheless, he has come under criticism from health experts for moving too quickly. While the high rates of vaccination mean mostly younger and stronger people are infected, with fewer severe cases, eventually, these are mounting.

Another place to look is Israel, one of the world´s leaders in immunization – and undoubtedly at the top when counting countries only using Western vaccines. Roughly 85% of those 16 and older received one jab and 80% two doses of the Pfizer/BioNTech solution. That led to nearly eradicating the disease – an average of some 20 cases per day and a positive test rate of 0.1%.

Nevertheless, the arrival of the Delta variant sent cases from an average of 24 per day in mid-June to 473 at the time of writing in a country with some nine million inhabitants. 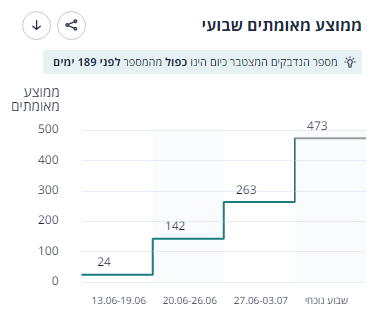 While many of the cases affect unvaccinated schoolchildren, some people who had received two doses were also infected. Moreover, despite the young age of the unimmunized and the mild cases among those fully protected – in a country highly enthusiastic with inoculations – the number of severe cases has crept up. 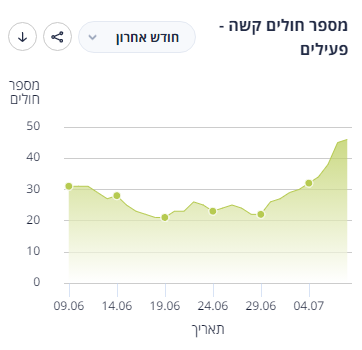 That shows that even with high vaccination levels, cases and hospitalizations can rise once Delta appears.

Returning to the old continent, the Delta variant is most prevalent in Spain and Portugal – countries that were late to restrict visits originating in the UK. Germany and France reacted swiftly to the British Delta wave, and now Paris recommends refraining from holidays in the Iberian peninsula. It seems that for good reasons.

Catalonia, the northeastern region of Spain and home to Barcelona, is experiencing an exponential explosion in cases. From hovering near 3,000 cases per week in mid-June, a region with nearly 8 million inhabitants has seen over 30,000 cases. The Reproduction Rate has topped 3 and the positive test rate leaped from under 4% to above 15%.

The region's Outbreak Risk chart tells the story of infections: 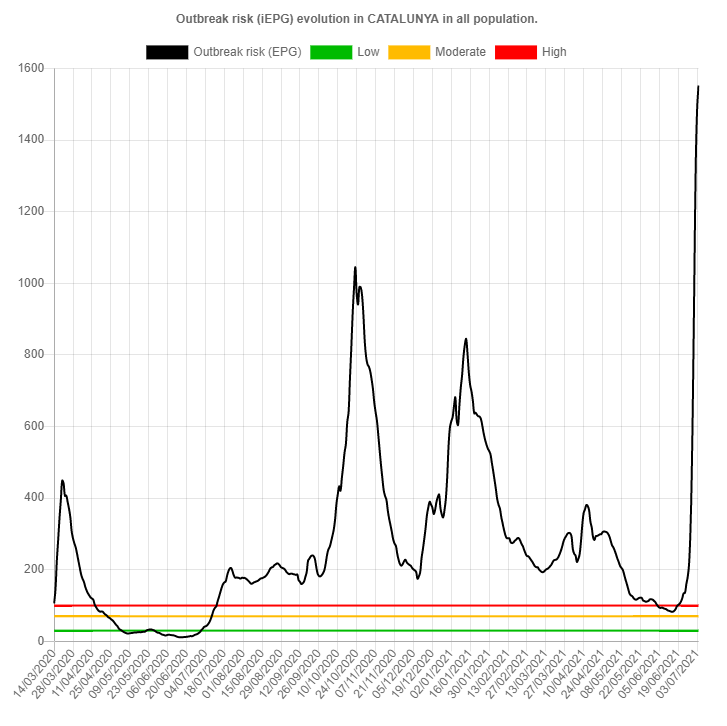 This surge in cases has a lagging effect on hospitalizations, but the upswing is already notable. Catalan hospitals now have over 600 people admitted due to covid, contrary to under 500 a few weeks ago. 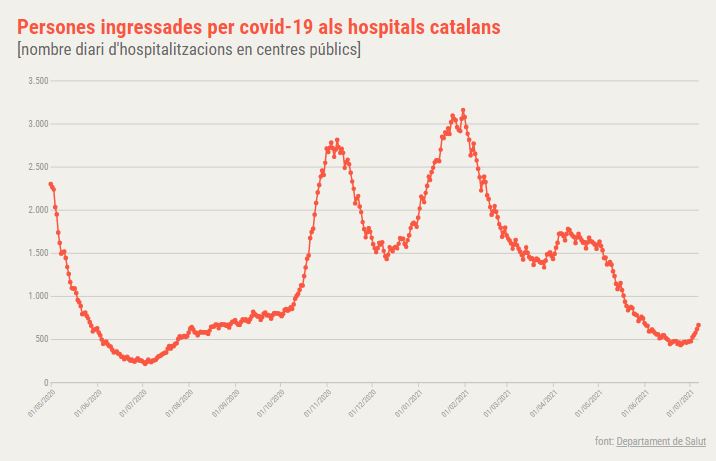 The US is next, dollar impact

Catalonia is a good comparison to the US, as some 56% of the region's citizens have been jabbed once, similar to America's 55%. Counting only adults, the ratio stands at 66.5% in Catalonia and 68% in the US.

The Delta variant is already responsible for around 50% of cases in America, but outbreaks are limited to parts of Arkansas, Texas, Missouri and Nevada. Other places are still calm – perhaps the calm before the storm.

High transmissibility rate and elevated mobility over the summer imply a rapid spread of the variant across the nation. Moreover, despite having a large surplus of vaccine doses – and having immunization open to those 12 and above – jabbing rates are declining. 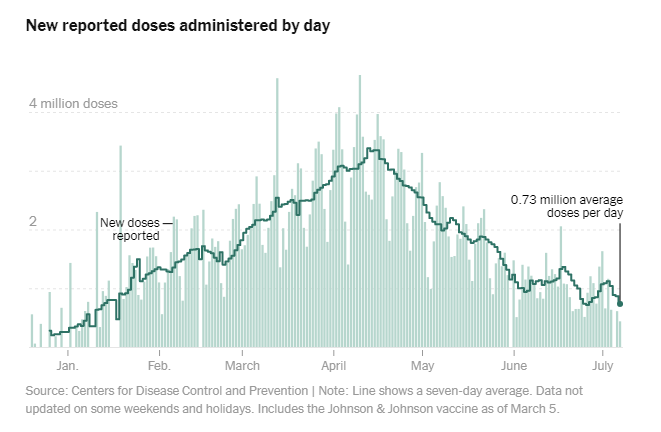 These three factors imply the US is on the verge of a significant covid wave that could undermine the recovery. Monetary and fiscal stimulus will likely prevent a significant downturn. However, if fewer Americans are able to work due to self-isolation, fear of the virus or lockdowns, third-quarter growth could suffer a hit.

As the largest economy in the world, "when the US sneezes, the world catches a cold" goes the old saying. In times of crisis, cash is king and the dollar is the king of cash, goes another adage. The greenback could be the main beneficiary of such as a new covid wave.

How long will it last? Rapid transmission of the Delta variant could trigger faster vaccination rates and more cautious behavior that could eventually flatten the curve. Immunization from previous waves could help turn the tide, making the current upswing shorter than previous ones. Once things improve, the air would come out of the dollar as well.

The world's largest economy is on the cusp of suffering from another covid wave led by the Delta variant, as experience from other regions shows. A risk-averse market mood could lif the dollar, albeit for a shorter spell than in previous coronavirus waves.