The EUR/USD pair is up for a fifth consecutive week, hitting these days 1.1638, its highest since September 2018. The pair’s advance was a combination of positive news from Europe and concerns about the economic future of the US. These last were directly linked to mounting tensions between the country and China, and the constant upsurge in coronavirus contagions.

Tensions between Washington and Beijing had been on the rise ever since China imposed a new security law in Hong Kong, and the US decided to take off trade privileges to the region. Over the last few days, embassies have been closed and diplomats expelled, spurring concerns about a new cold war. Indeed, nothing has been said about modifying phase one of the trade deal, but it will clearly suffer from these headlines.

As for the pandemic developments, the number of cases in the US has surpassed 4 million, with the country adding 1 million new cases in two weeks. The death toll is above 147K. But things are not better outside the US, with outbreaks in Europe and soaring cases in Latin America and Africa pointing to a global economic recession. News about progress on at least four vaccines entering stage three of testing weren’t enough to overshadow investors’ anxiety.

On a positive note, EU leaders agreed on a recovery fund after a marathon four-day discussion, which implies  €750 billion, €390 billion of which will be delivered as grants and €360 billion in loans. An unprecedented historical breakthrough within the Union.

Data and the Fed

Markit reported on Friday the preliminary estimates of its July PMIs for both economies. European figures resulted upbeat, with manufacturing output returning to expansionary levels and the Services index reaching a two-year high. In the US, the readings improved from the previous ones, but missed the market’s expectations, with services output printing 49.6 against the 51 expected.

The main event next week will be the US Federal Reserve Monetary Policy meeting. US policymakers are expected to maintain the status quo, mainly considering the US Senate is discussing another $1 T aid package. Investors’ focus will be on Powell’s comments regarding the outlook. Still, he is expected to reiterate that the future is uncertain amid the ongoing pandemic.

The US will also publish June Durable Goods orders on Monday, and more importantly, the preliminary estimate of Q2 GDP on Thursday, seen at -6.2% from the previous -5%. Bad news that had been partially priced-in.

Coming from Europe, Germany and the EU will also report the preliminary estimates of Q2 GDP. However, and throughout this month, speculative interest has understood that the economic downturn is far from over. Things are to get worse before getting better. Numbers will continue to be less relevant than hopes or fears about the future.

The EUR/USD pair bullish break out seems poised to continue in the long term, and as long as the pair remains above 1.1496, the former 2020 high. The weekly chart shows that the pair rallied above the 200 SMA for the first time in over two years, as technical indicators maintain their upward slopes well into positive ground.

The daily chart shows that the pair has been on the run for six consecutive days, which increases odds for a bearish corrective movement, but by no means suggest a top has been reached. In the mentioned time-frame, the pair is over 200 pips above a bullish 20 DMA, which has widened the distance with the 100 and 200 SMA, these last converging around 1.1070. The lack of momentum of the larger moving averages is somehow worrisome, long-term speaking. Technical indicators, in the meantime, have lost bullish strength, but remain within overbought readings.

The pair has now a relevant resistance level at 1.1660, with a break above it, favouring an extension towards the 1.1730 price zone. Beyond this last, the pair has room to extend its advance to 1.1814, September 2018 monthly high.

As said, pullbacks need to hold above the 1.1500 area for bulls to retain control. The 1.1460 area has always been a tough bone to break one way of the other, which means an interim top will be confirmed it the pair falls below this last. 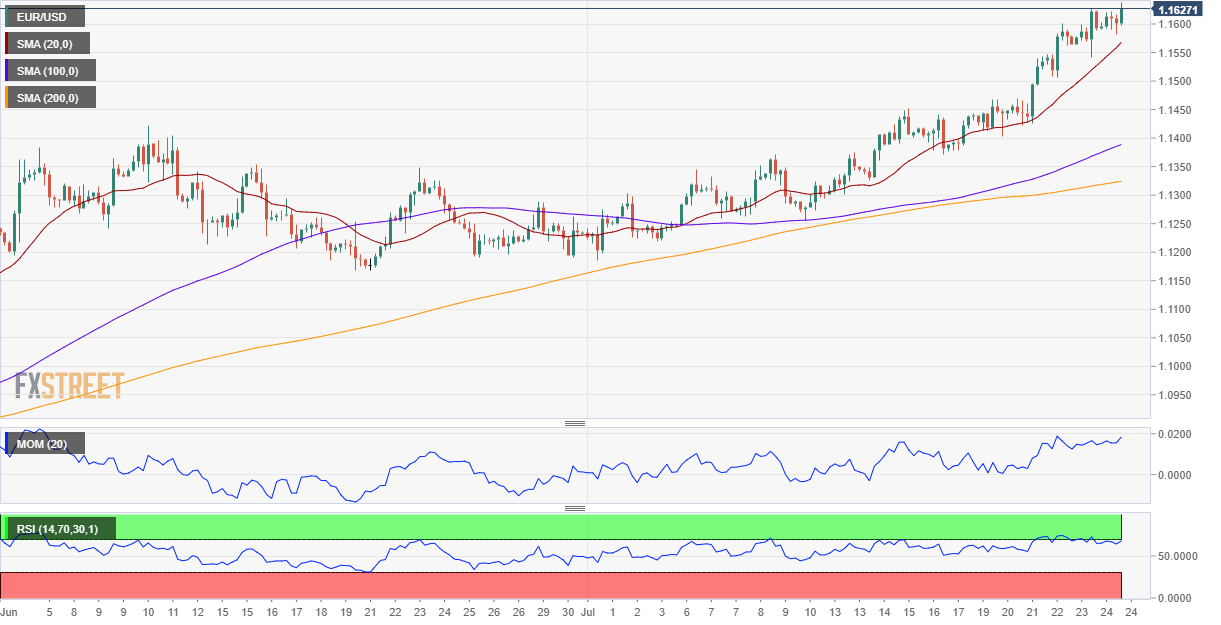 The FXStreet Forecast Poll shows that the latest advance catch investors off guard as the price moved way more than expected. For the weekly perspective, the average target is 1.1614, although only 23% of the polled experts expect the pair to advance beyond the current 1.1620 price zone. Bears become a majority in the monthly and quarterly views, although in both cases the pair is seen holding above 1.1400 on average.

In the Overview chart, moving averages have accelerated north, retaining their strong bullish slopes. In the monthly perspective, there’s a large accumulation of possible targets around 1.1200, which suggest that the pair could correct towards the region in the upcoming weeks. Nevertheless, and despite the retracement expected, investors seem to be holding on to an intrinsically bullish stance.