The AUD/USD pair is trading at around 0.6760 heading into the close, down for a fourth consecutive week. Never-ending trade talks between the US and China had somehow discouraged trading these days and a long holiday in the US exacerbated the quietness. An empty Australian macroeconomic calendar exacerbated the current uncertainty.

Trade talks between the US and China continued, and while both parts continue to speak encouraging words toward a deal,  speculative interest is now doubting they could clinch an agreement before year-end. In fact, things took a slight turn to the worst, as US President Trump signed the Hong Kong human rights act, supporting the protest movement, something Chinese authorities saw as a step back.

RBA’s Governor Lowe hit the wires mid-week, indicating that negative interest rates aren't on the cards, although mentioned quantitative easing as a possibility, if the circumstances warrant it, keeping the Aussie under pressure.

The upcoming week could be a bit more interesting in terms of macroeconomic data, as the Australian calendar will be packed, while China will also publish some relevant figures.  The RBA is scheduled to meet next Tuesday, and will likely shed some additional light on whatever is next with monetary policy. The country will also publish its Q3 Gross Domestic Product. The economy is expected to have grown by 1.7% in the three months to September, better than the previous 1.4%.

The AUD/USD pair is technically bearish and poised to extend its slump, as beyond technical readings saying so, the imbalances between both central banks back a downward extension in the longer run.

The weekly chart shows that the pair continues developing below bearish moving averages, although the Momentum indicator is flat around its 100 level, as the RSI heads south around 41. In the daily chart, the bearish case is also clear, given that the pair has accelerated its slump below all of its moving averages, with the 20 SMA crossing below the 100 SMA. Technical indicators remain within negative levels, although with uneven strength. 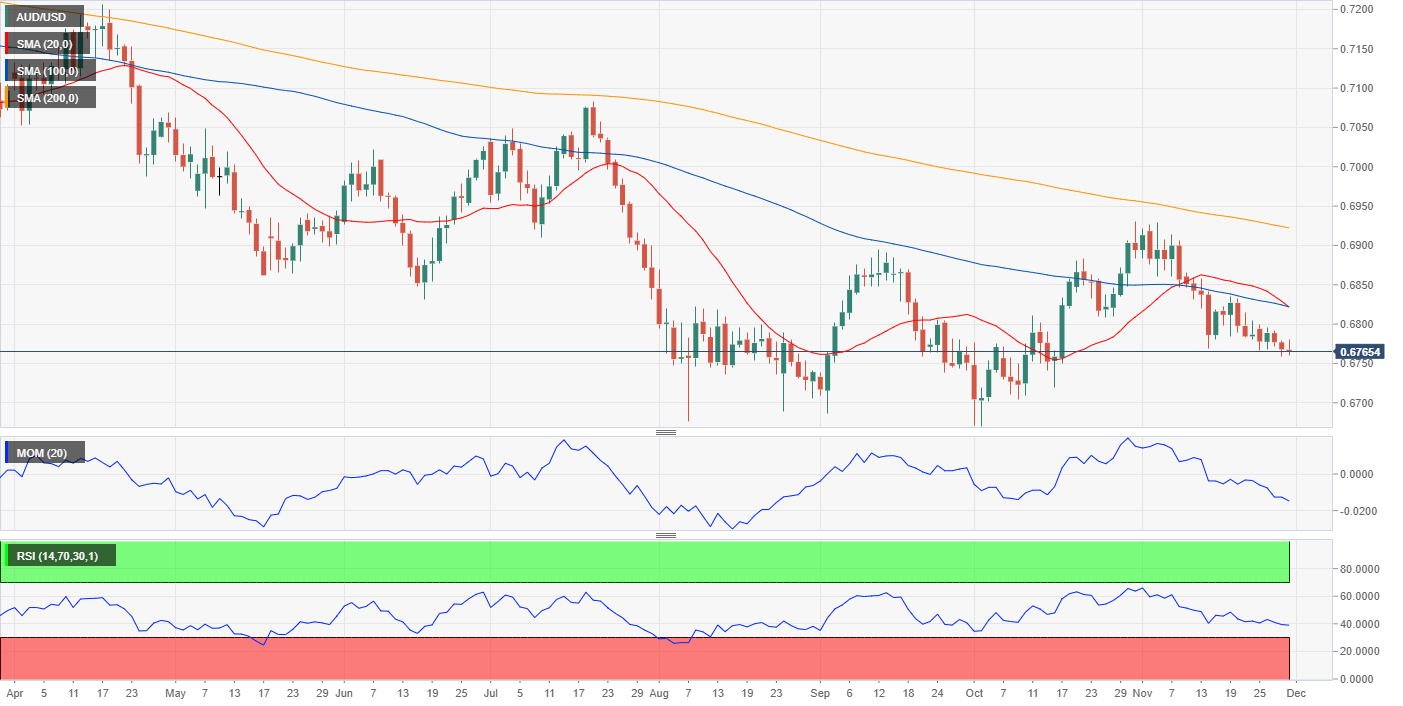 The FXStreet Forecast Poll is showing a mixed sentiment, bearish for next week and by the end of the quarter, but bullish heading into the year-end. Nevertheless and in all cases, the pair is seen below the 0.6800 level on average. Should the level give up, the next long-term cap comes at around the 0.7000 figure.

The Overview chart shows that moving averages lack directional strength, turning flattered as time goes by, and with the shorter one offering a modest downward slope.

EUR/USD Forecast: Fireworks will be back before year-end