The EUR/USD pair has been confined to a 50 pips range in what was a forgettable week in terms of market’s action. The lack of progress in US-China trade talks has dented investor’s will, resulting in volume falling to its lowest in over seven years. To put it simply, trade tensions between the two largest worlds’ economies are believed to be the main reason for the ongoing global downturn.

But is that enough to explain why the FX board is lifeless? Well, no. US-China tensions are not the only factor weighing on the markets, but is another one generating uncertainty. Brexit with UK elections, Trump’s impeachment, LATAM political turmoil, all weigh. And all shows that the current political and economic structure is not working as it should.

Data is being “ignored,” meaning not triggering a market’s reaction, although for sure, confirming that economic growth remains slow and uneven between the most relevant economies. Nevertheless, the US seems to be in a better shape than most of its counterparts, giving the USD an advantage against other currencies.

The market’s mood suffered a setback on Thursday when US President Trump decided to sign the Hong Kong human rights act, supporting the protest movement and angering Beijing. The negative effect of the headline was offset by news indicating that trade talks continue despite Trump’s decision and the Thanksgiving holiday, which kept the market’s dead by the end of the week.

Among the most relevant figures released these days, the second estimate of the US third-quarter Gross Domestic Product resulted upbeat, up to 2.1% from 1.9% in the previous estimate. Apart from a modest down-tick in inflation, US data was generally encouraging.

In the EU, on the other hand, most German data came in worse-than-anticipated, with inflation down by 0.8% MoM in November and Retail Sales collapsing to -1.9% in October. The European annual CPI at 1.0% in November, surely keeps in check EUR gains.

The new week will bring the final versions of November Markit PMI for both economies, the EU Q3 GDP and October Retail Sales. The start of the week, however, will be the US Nonfarm Payroll report next Friday, when the country will also release the preliminary estimate of the December Michigan Consumer Sentiment.

At this point, the American economy is expected to have added 183K new jobs in November, while the unemployment rate is seen steady at 3.6%. Average Hourly Earnings are also seen unchanged at 3.0% yearly basis. Such a strong recovery in employment should maintain the greenback in its leader’s role.

The trading range in the EUR/USD pair has been shrinking, but the bearish case remains firmly in place. Not only because it’s closing in the red for a second consecutive week, but because it’s also challenging a critical Fibonacci support, the 61.8% retracement of its October rally.

In the weekly chart, the pair has slid further below a bearish 20 SMA, while technical indicators head lower within negative territory, although with limited downward strength. The risk is skewed to the downside, with the market eyeing 1.0878 this year low.

The daily chart shows that the pair remains well below bearish moving averages, correctly aligned to support a downward extension. The Momentum is barely retreating from its mid-line, while the RSI grinds steadily lower, currently around 39. 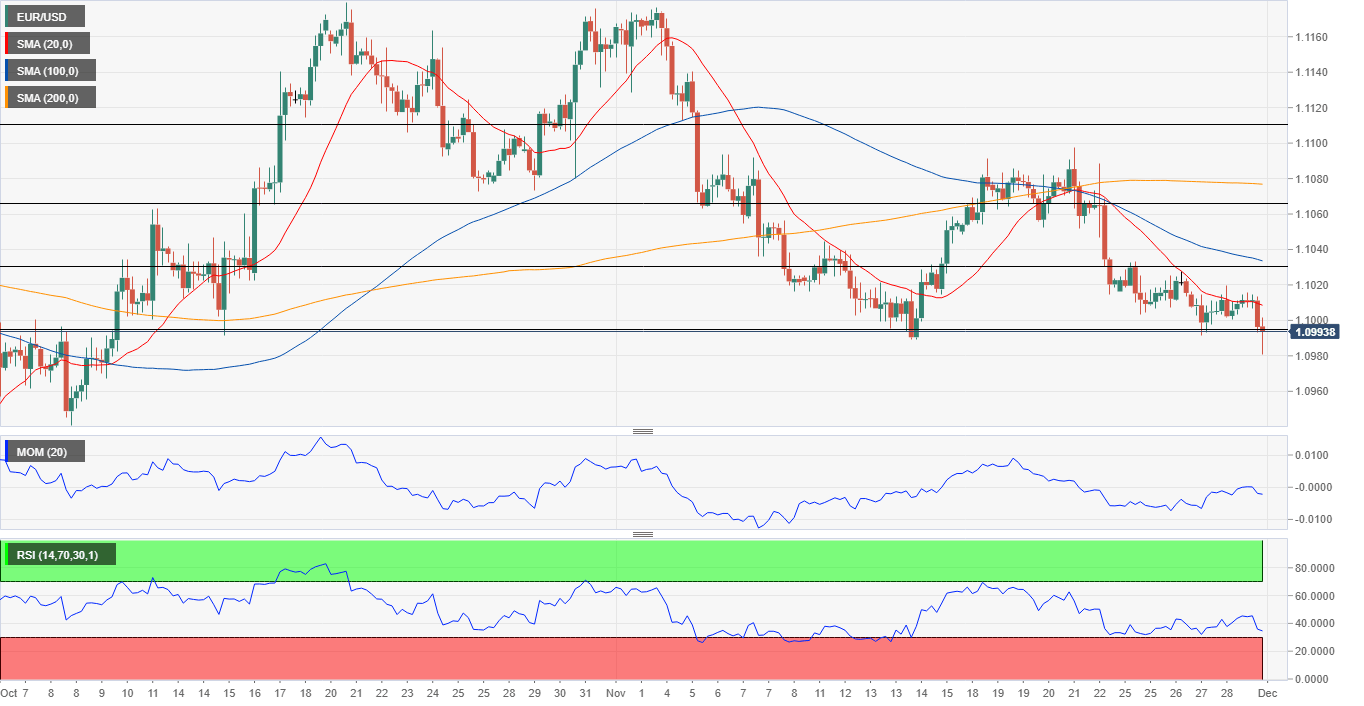 The FXStreet Forecast Poll indicates that the market is willing to keep pushing the pair lower, as the prevailing sentiment is bearish. Nevertheless, speculative interest hesitates over a strong slide below the 1.10 figure.

The Overview chart shows that, in the monthly perspective, most targets accumulate just above the current price, although the number of those betting for lower levels has increased in the quarterly view. 1.1200 seems to be a line in the sand, as possible targets beyond this last are scarce in the three time-frame under study.