XRP price appears to be consolidating after a rally of 50% since its swing low on July 20. New development on the Securities & Exchange Commission (SEC) case against Ripple Labs has revealed that the lawsuit is likely to continue, with no end in sight.

XRP price has been uneventful after its 10-day rally as it starts to lack decisiveness, much like the $1.3 billion lawsuit filed by the SEC against Ripple Labs.

In late July, Ripple requested the court take into consideration a statement by SEC Commissioners Hester Peirce and Elad Roisman that has been used as support for the blockchain firm to oppose the agency’s motion to strike its fair notice defense.

The two commissioners’ statement was referenced by Ripple in its argument that there was a lack of clarity on what the law requires for market participants around the application of securities laws to cryptocurrencies.

The SEC stated in response that the commissioners’ views did not reflect the position of the agency and what they say in public would not be relevant to the financial watchdog’s argument that Ripple violated securities law.

Ripple further argued that the SEC’s arguments regarding the two commissioners highlight that the agency’s position is “legally untenable.” Further, the blockchain firm’s lawyers stated that previous cases, including Kik and Telegram, did not involve any claims against individual defendants.

Therefore, the lawyers responded that Ripple executives Brad Garlinghouse and Chris Larsen should not be accused of knowing and recklessly disregarding the legal consequences of their actions when they sold XRP.

Attorney Pascale Guerrier recently filed a notice of appearance on behalf of the SEC, which indicates that no settlement deal would be on the table. Although Ripple filed for a settlement earlier this year, attorney Jeremy Hogan believes that the addition of a new lawyer for the agency makes it look like there will not be any resolution in the near term.

James K. Filan, an attorney familiar with the case, said based on his experience that a settlement is unlikely to happen any time soon. He added, “This is a war. I think we should settle in for the long haul.”

XRP price action indicates that Ripple is stuck between two major levels. Currently, Ripple resides in a tight range within the 38.2% Fibonacci extension level at $0.67, coinciding with the 50-day Simple Moving Average (SMA) and the 200-day SMA at $0.77.

Although XRP price has had a significant recovery since July 20, Ripple appears to be consolidating before showing direction intentions.

The Momentum Reversal Indicator flashed an MRI top signal on July 30, which suggests that XRP price could be expecting a retracement. 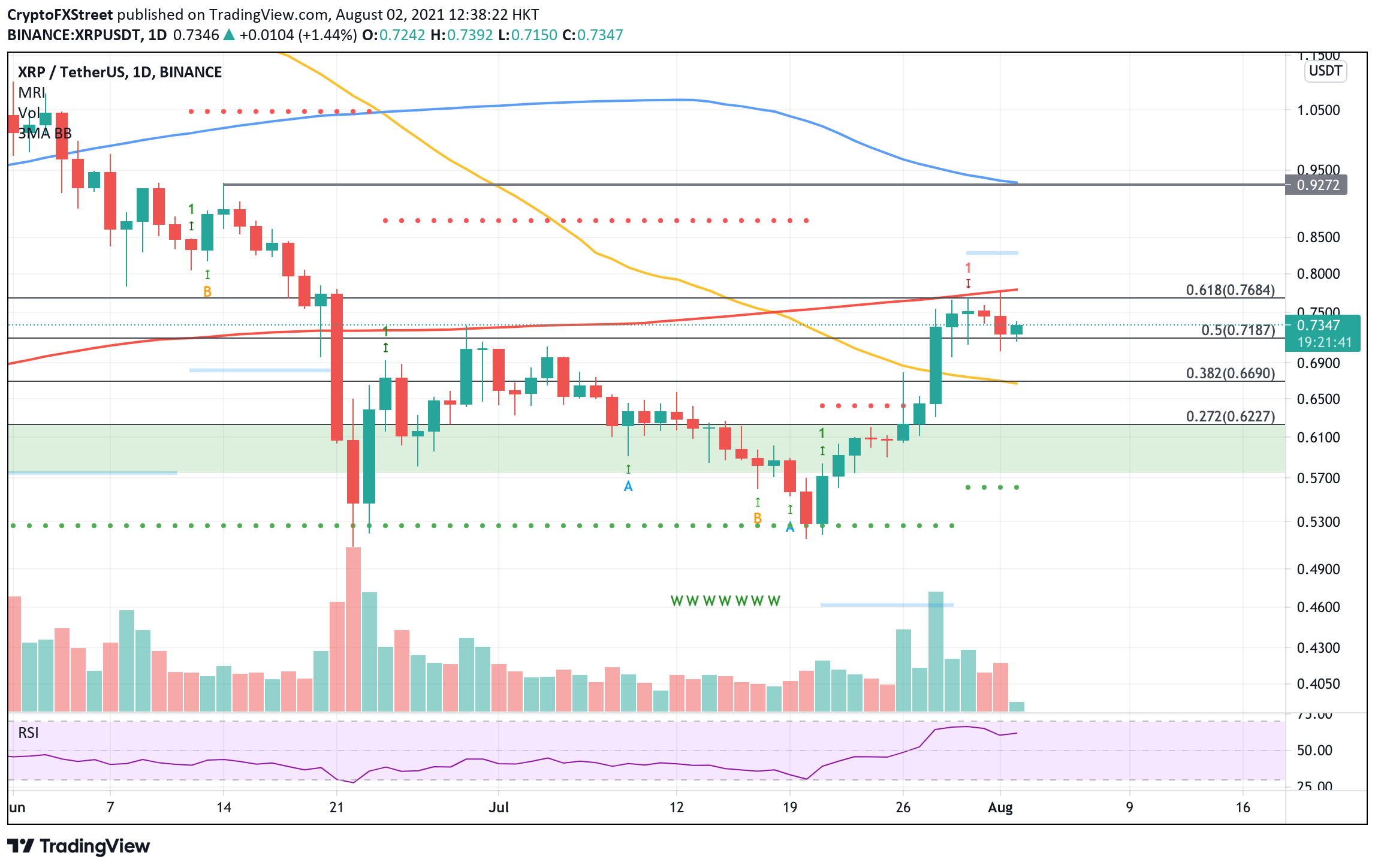 As long as Ripple holds the 50-day SMA, further upside potential could materialize in the longer term. Bigger aspirations for the bulls could expect XRP price to target the 100-day SMA at $0.92, should the cross-border remittance token slice above the 200-day SMA resistance and the 61.8% Fibonacci extension level at $0.76.

However, a spike in selling pressure could push XRP price down toward the 27.2% Fibonacci extension level at $0.62, the start of the demand zone that extends to $0.57.