Ripple continues to present a new defense for its case filed by the United States Securities & Exchange Commission (SEC). The latest filing from the legal team of the blockchain firm leverages the financial watchdog’s recent comments over “regulatory uncertainty.”

As part of Ripple’s new defense, the cross-border remittance firm used the enforcement action taken against crypto website Coinschedule to bolster its case.

The digital asset site Coinschedule was said to be promoting initial coin offerings (ICOs) and in return receiving funds from token issues, as stated by the SEC on July 14.

Despite the regulator’s announcement, Republican SEC Commissioners Hester Peirce and Elad Roisman wrote in a public statement that they were displeased with Coinschedule’s settlement, which did not mention which tokens were illegally promoted.

The SEC’s settlement with the crypto site did not indicate which cryptocurrencies were securities, creating ambiguity for the financial watchdog’s guidance on determining whether a token being sold could be part of a securities offering.

The Commissioners further highlighted that there was a lack of clarity around the Howey Test, a determining test for what qualifies as an investment contract.

In light of the recent event, the legal team behind Ripple highlighted the settlement’s lack of regulatory clarity for market participants regarding the regulations surrounding securities and trading.

Ripple executives Brad Garlinghouse and Chris Larsen’s lawyers believe that the Coinschedule settlement proves that any charging of defendants would be “legally untenable.”

John Deaton, an attorney familiar with the Ripple case, added that if the two SEC Commissioners admit that there is considerable confusion in the market in 2021 over which digital assets are considered to be securities, he questions how the regulator could prove that the executives knew that XRP was a security back in 2013.

XRP price continues to tread in deep waters as Ripple is unable to reverse the period of underperformance. The cross-border remittance token has broken below a critical level after facing the death cross, opening up the possibility of further decline.

XRP price is nearing crucial support, to which Ripple will need to decide whether it will make a recovery or face the risk of a steep drop into unchartered waters. 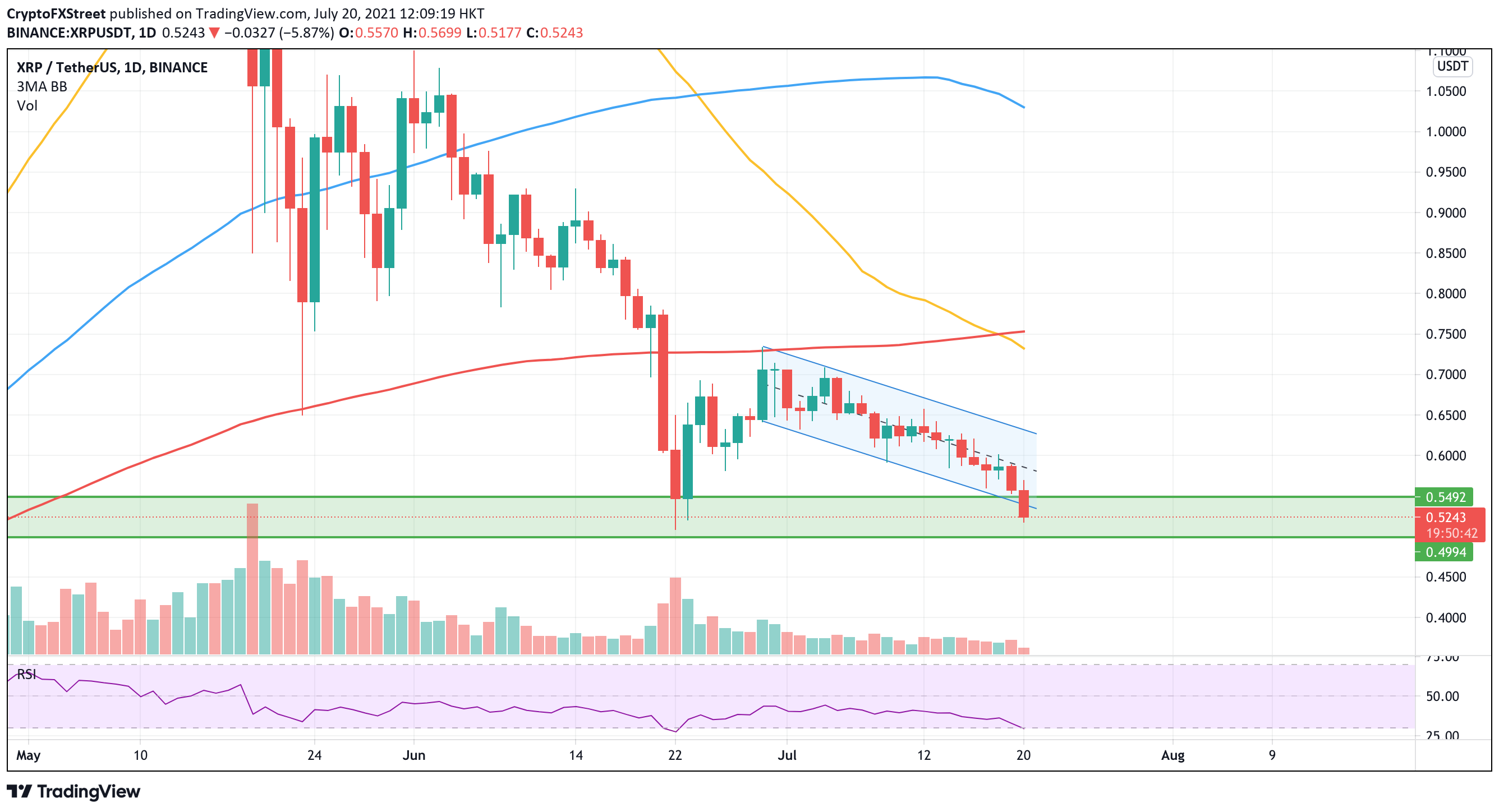 Slicing below the lower boundary of the declining parallel channel has already spelled trouble for XRP price, but Ripple must hold above $0.50 for any hope for the bulls.

Should XRP price lose the $0.50 level, the lower boundary of the demand barrier, Ripple risks a sharper free fall into the March lows of $0.41.