Uniswap is on a tear after announcing a new upgrade to the decentralized exchange that will help solve slippage and capital efficiency issues.

Uniswap platform’s liquidity has more than doubled since the beginning of the year, while UNI price has seen a 655% surge in the same period. With Hayden Adams, the creator of Uniswap, teasing the “version 3” of the DEX recently, UNI price has risen more than 40% in the past four days.

The first tweet relating to v3 was on February 15, where Adams stated,

Uniswap V3 will face slippage and capital efficiency head on to prove AMMs can outcompete traditional exchanges on all fronts.

Ethereum’s recent improvement proposal, EIP-1559, has also caught the attention of UNI investors. When implemented, this upgrade will reduce the arbitrary nature of transacting on the network and make ETH deflationary.
Since EIP-1559 will essentially reduce transaction fees drastically, it could greatly benefit Uniswap’s decentralized exchange.

When considering that a trader paid $41,874 in fees for a transaction that involved sending assets to Uniswap, such exorbitant fees have hindered the growth of DeFi. Suffice it to say, EIP-1559 has sparked flames of optimism around Uniswap investors.

During the recent developer call, the proposal was finalized and scheduled to be included in July’s London hard fork. This update will help not only help Uniswap increase its adoption but other DEXs built on the Ethereum blockchain as well.

Now, it will be interesting to see if EIP-1559 will help Uniswap attract investors and developers who recently migrated to non-Ethereum blockchains.

Uniswap price has grown almost 60% since March 1 to make a new all-time high of $33. Now that the DeFi token has entered price discovery mode, blockchain activity suggests that it is primed for another leg up.

Indeed, the number of large UNI transactions on the network has risen by a whopping 218% in the past two days. The sudden uptick in transactions worth more than $100,000 shows that high net worth investors or whales are interested in Uniswap at the current price level.

Along the same lines, the number of new UNI addresses created on a daily basis is up 64% within the same period. The continuous expansion of the network is considered a positive sign as it reflects user adoption over time.

A further increase in both metrics could lead to price appreciation because it shows that market participants are confident in UNI’s upside potential. On its way up, Uniswap price could visit $52 as the next potential peak.

Nonetheless, investors should note that the 4-hour and the 6-hour charts have seen Tom DeMark (TD) Sequential indicator flash sell signals. The bearish formations developed in the form of green nine candlesticks, forecasting a correction before the uptrend resume. 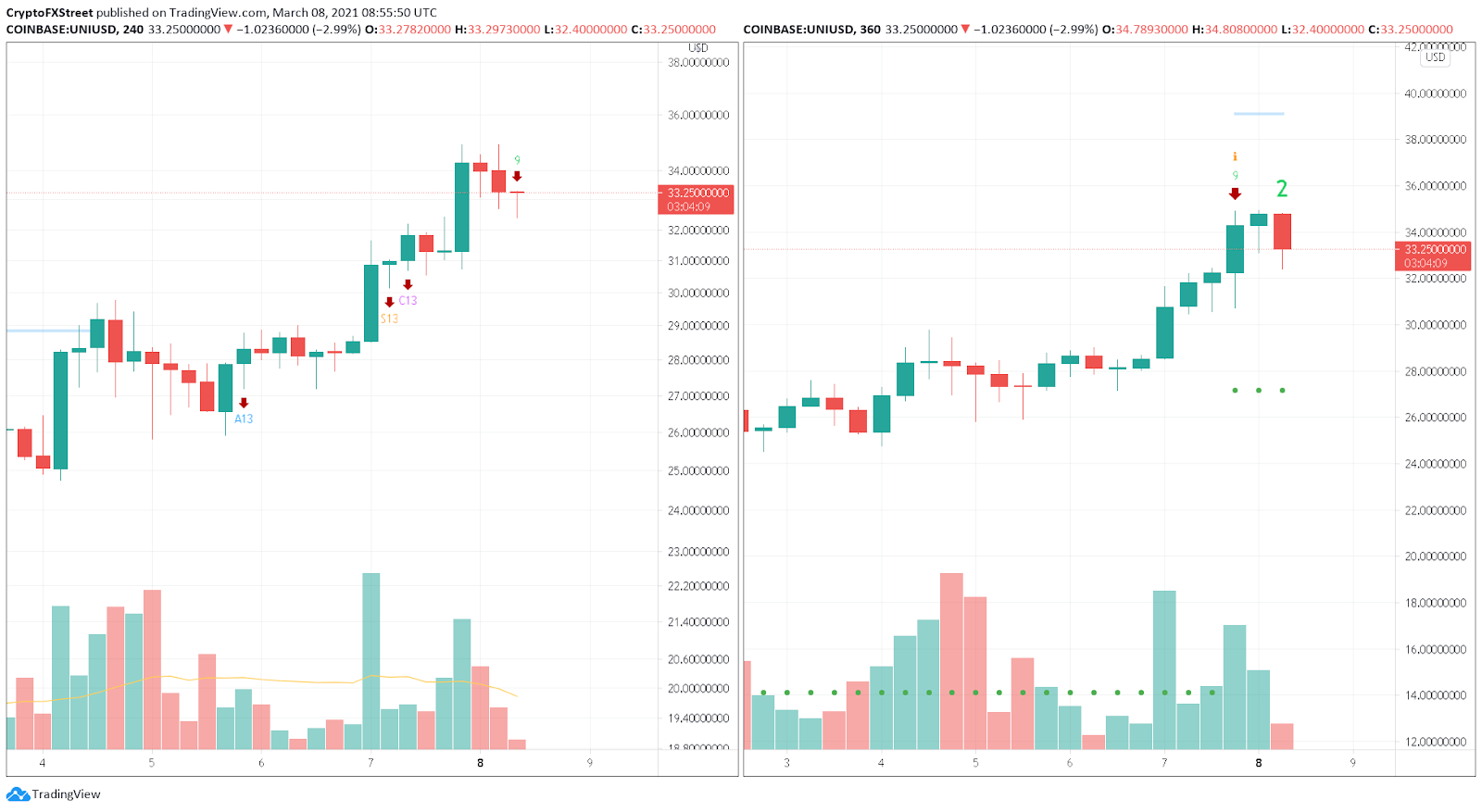 If the sell signals were to play out, Uniswap price could drop by 18% towards the $27 support level.