Bitcoin price is undergoing a fade to the downside as investors cash in on the Christmas rally. Ethereum price, in its turn, is correcting after bulls got rejected from breaking out of a triangle on Tuesday. Going into Christmas, XRP should see bulls defending the 200-day Simple Moving Average (SMA) as investors book profits after breaking above the 55-day SMA earlier in the Asian session this morning.

Bitcoin (BTC) price was in a nice rally going into Christmas but the trend looks to be hitting a curb at the time of writing as investors book profits and BTC price starts to fade and pull-back. BTC bulls tried to break above $50,155 but the advance got checked, and the opening price this morning during the Asian session already pointed to some sharp profit-taking. Expect BTC to look for support now while bulls hope to keep price action above $50,000 going into the weekend.

BTC bulls will need to watch out as liquidity starts to die down going into the holiday season. Expect the first level of support at $47,565 where the 200-day SMA lies, although it may not provide that much support given it has been  chopped up by price action breaking above and below multiple times over the last few days. Instead, look for $47,065 to do the trick as this has held some importance in the past and provided support for higher lows over recent days. 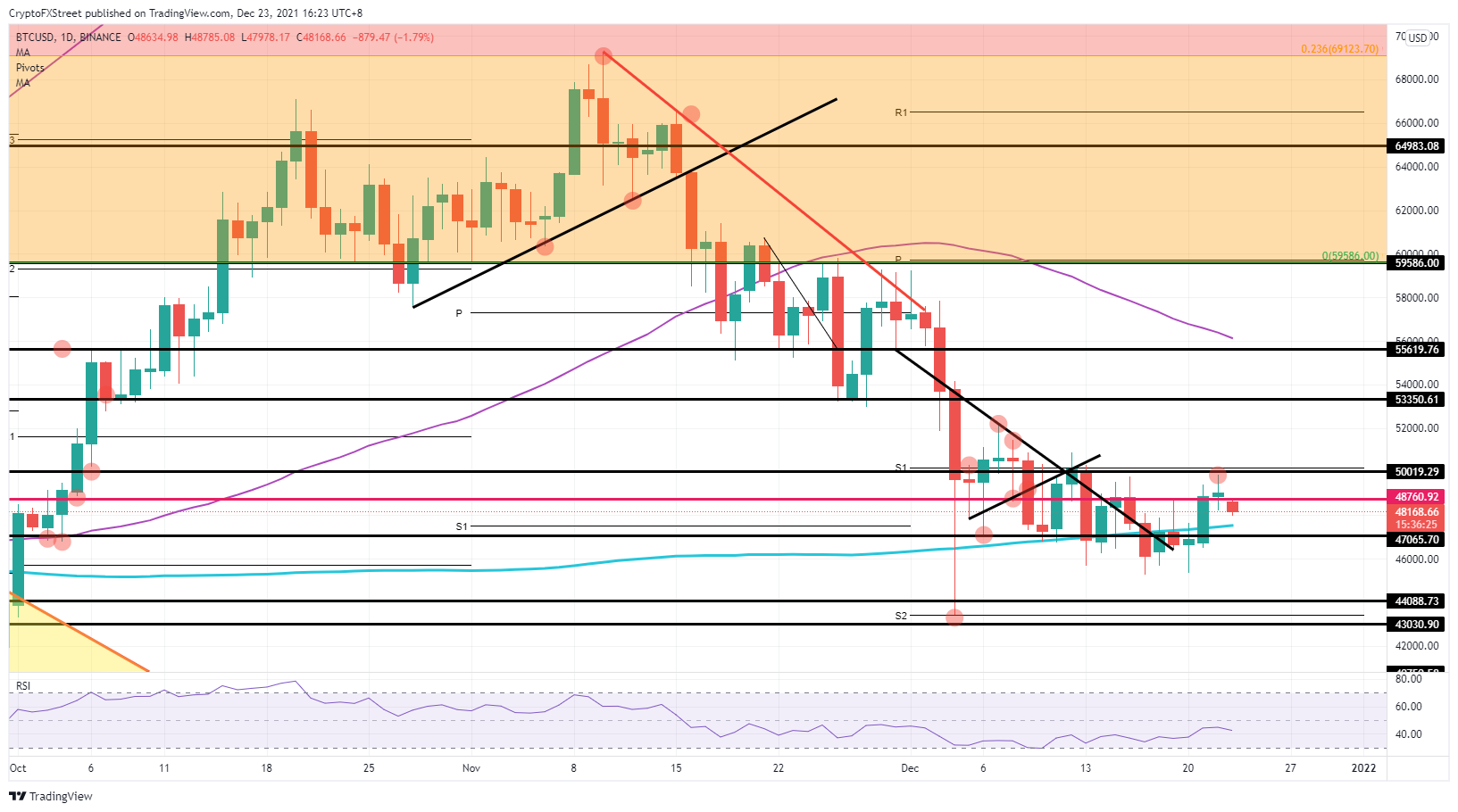 Expect bulls to try and reclaim $50,000 going into the last week of trading this year, but with profit-taking and investors pulling their positions during the holidays, expect to see more selling pressure that could trigger another leg lower BTC price. That would bring $44,088 and $43,040 back into play with the monthly S2 support level in the middle of that range. By then the Relative Strength Index (RSI) is also likely to be firmly in oversold territory.

Ethereum price under short-term pressure with failure to uphold $4,000

Ethereum (ETH) price is still trading in a bullish triangle but bulls have failed to deliver a strong signal to the markets because of their inability to consolidate above $4,000. Instead, ETH price is fading to the downside, with price action further drifting away from $4,000. For now, the sloping side of the bullish triangle (dotted ascending blue line) is keeping price action in play and is still performing a squeeze to the upside. But it is hanging by a thread as investors are gently starting to pull out of their investments just before the start of the holiday season.

ETH prices could see more downward pressure as investors continue with their profit-taking. A break below the ascending trend line would accelerate the trend of investors pulling out of ETH, resulting in more downside towards $3,687. This level kicked off the bullish triangle and will be a profit target for short sellers to squeeze bulls out of their initial entry position. If more headwinds arise or  cryptocurrencies experience more divestment before the holidays, even $3,391 could be on the cards, which would mean a 14% devaluation.

If the bullish triangle plays out, expect price action to bounce off the sloping bottom edge  and for bears to get pushed up against $4,200. A punch through that level could see a breakout higher as sellers capitulate. Although bulls would quickly face the 55-day SMA at $4,300, expect to see an accelerated push to the upside as thin liquidity enables them to quickly cover significant ground towards $4,465.

Ripple (XRP) price investors are taking some profit from other cryptocurrencies after breaking above the 55-day SMA at $1.00. This should come as no surprise as XRP price action already rallied 23% in the last few days. Investors will want to cash in and diminish some risk over the holiday period.

Expect XRP price to be supported by the 200-day SMA at $0.95, which already has proven critical at previous highs and lows where it got supported or rejected on previous attempts. This way, XRP has the best outlook for a fresh start that favors bulls going into the new year. Expect a further continuation to lead to a break above the 55-day SMA, and then target $1.10, with the monthly pivot as a place for the second leg in the rally to pause.