The Sandbox (SAND) has undergone a heavy paring back of the gains after hitting all-time highs at the end of November. With bulls trying to reclaim the lost levels, a bull trap almost formed. With the shift in global sentiment and tailwinds emerging back in cryptocurrencies, bulls got saved at the last minute and are now reclaiming significant strategic levels to the upside with the 38.2% Fibonacci level as key before trying to make new all-time highs.

The Sandbox saw investors fleeing the scene after profit-taking sparked a significant fade to the downside at the end of November. As bulls tried to return to those all-time highs, a bull trap almost got formed with bulls getting squeezed out of their positions, entering at the 38.2% Fibonacci level around $5.69 and getting stopped out at the 50% Fibonacci level near $4.72. But the turn in sentiment this week, coming from the US central bank, saved their strategy.

SAND sees bulls bouncing off that 50% Fibonacci level and pushing back towards 38.2% Fibonacci level to keep new all-time highs insight. Do not expect this to happen overnight as investors will want to spread their investments across several cryptocurrencies, as the current tailwinds are putting overall cryptocurrencies on the front foot. Going into Christmas and year-end, expect a squeeze to the upside with new all-time highs in the making. 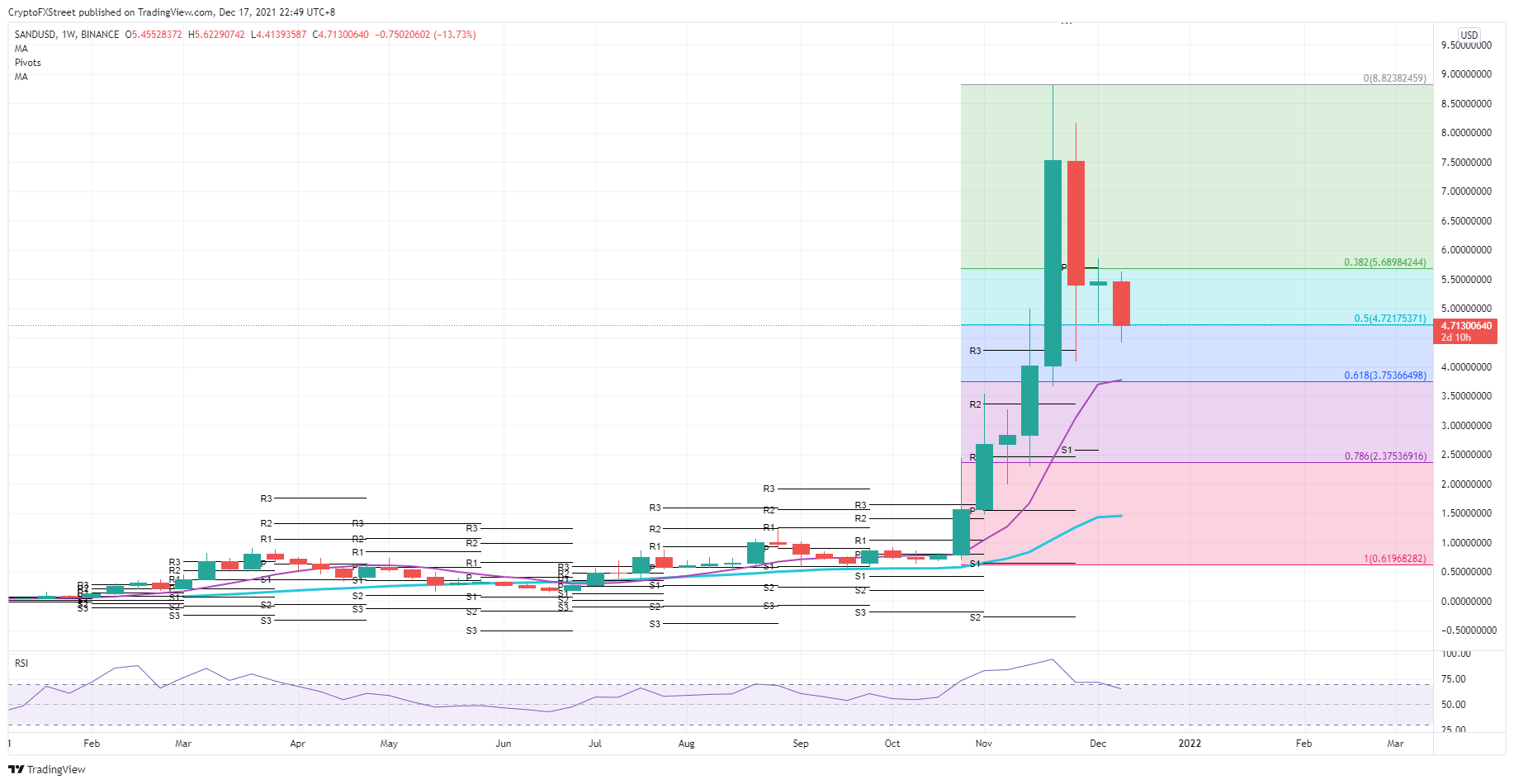 The risk that comes with the last two weeks in the year for trading is thin liquidity. A shock could come from some institutional investors that are pulling their money out over the holiday season, triggering a global selloff in cryptocurrencies as retail investors will want to get out as well. In that case, expect SAND price action to give way to the 50% Fibonacci level at $4.72 and see a further downtick towards the %61.8 Fibonacci level at $3.75. That level should come as interest for investors as it holds the 55-day Simple Moving Average, which makes the level additionally attractive for investors to engage.

Crypto bloodbath hasn’t even started yet

Bitcoin price, Ethereum and other cryptocurrencies are on the backfoot after the massive slaughter that happened on the trading floor on Wall Street yesterday. Instead of cleaning up the pink sheets from the floor, the cleaning staff are probably busy sweeping up plenty of burned-out traders that got annihilated overnight as the Dow Jones printed its worst performance since June 2020.

Dogecoin’s co-founder advises crypto investors to perform actual research and stay informed about their crypto investments. While the meme coin crumbles under pressure, analysts find a bullish pattern that could drive a rally in Dogecoin.

Is Do Kwon going to get arrested after Terra's LUNA price collapse?

The collapse of Terra's LUNA price and algorithmic stablecoin TerraUSD (UST) has sparked outrage in the crypto community. Institutions and retail investors suffered significant losses when $40 billion in LUNA and UST’s market value was destroyed within a week.

If you haven’t sold yet, XRP will give you another chance before it dumps to $0.19