XRP price has printed two bearish chart patterns consecutively, suggesting Ripple could face further decline. The blockchain firm has made progress in the lawsuit filed by the US Securities & Exchange Commission (SEC) after the judge in the case approved of the company’s questioning of a former agency official, William Hinman.

XRP price could see a 17% decline

XRP price has generated a rising wedge pattern prior to posting a descending parallel channel shortly after on the daily chart.

The expected target of the rising wedge pattern is measured to be a 26% decline from the breakout, which would see XRP price drop to $0.49.

Adding credence to the bearish bias, another target for XRP price is given from the declining price range. By drawing another parallel channel directly underneath, Ripple projects a 17% drop from the current price, reaching a low of $0.48. 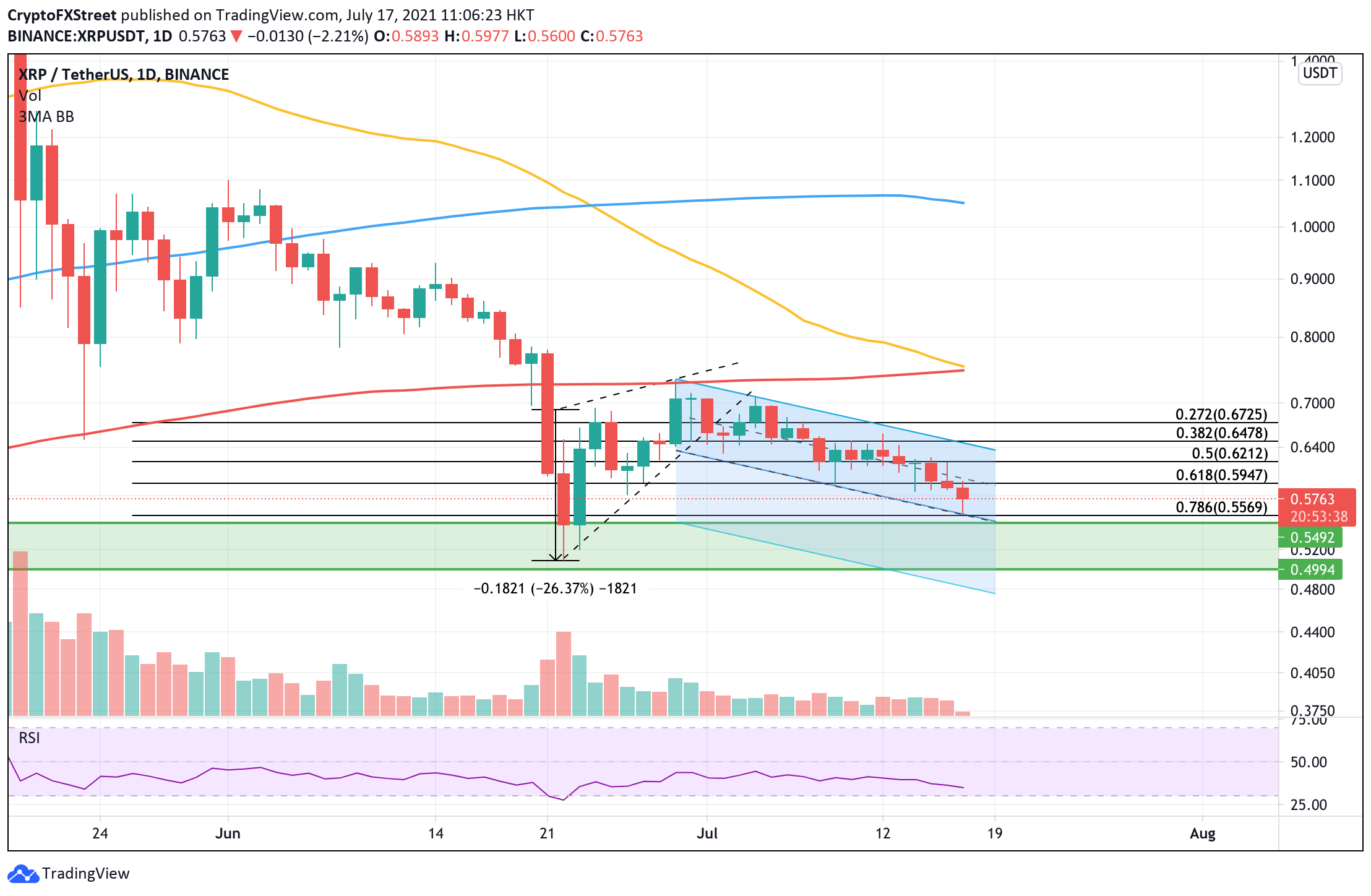 Investors should take note of the impending death cross, where the 50-day Simple Moving Average (SMA) slices below the 200-day SMA, which could further heighten the selling pressure of Ripple.

However, the aforementioned XRP price targets would only be in effect if Ripple loses the 78.6% Fibonacci retracement level at $0.55 at support and falling further into the demand zone, which extends from $0.50 to $0.55.

XRP price could potentially have another play in store, given the progress that it has made in the SEC case. Willian Hinman, a former agency official, is scheduled for a deposition on July 27. He will face questioning by the blockchain firm of his previous statement that indicates Ethereum is not a security.

If XRP price is able to leverage on the positive sentiment, Ripple could reverse the period of underperformance, but resistance is heavy on its way to recovery.

XRP price could target the 50% Fibonacci retracement level at $0.62 if selling pressure subsides. Until then, Ripple could continue to move sideways.

Solana price to drop another 50% as SOL looks for support

SafeMoon price, one of the most outstanding performers of 2021, is now one of the biggest pump and dump examples of 2021. After rising nearly 600% between September 29th and October 29th, SafeMoon crashed more than 88% to create a new all-time low on December 4th.

Axie Infinity price has certainly not been immune to the massive selling pressure during and after last Saturday's flash crash. While some sub-sectors of the crypto market may recover, Axie Infinity and other metaverse cryptos have further to fall.

CME Group had announced the launch of its Micro Ether futures in November to meet the rising institutional demand for Ethereum. The firm has now expanded its derivatives offerings with the second micro crypto product in 2021.