A new filing has revealed that crypto exchange Binance may have relevant documents associated with the Ripple lawsuit filed by the US Securities & Exchange Commission (SEC).

As part of the latest developments in the SEC v. Ripple lawsuit, cryptocurrency exchange Binance has been said to have documents relevant to the case.

The legal team behind Ripple CEO Brad Garlinghouse has made a filing with the Southern District of New York, seeking documents from Binance Holdings Limited, a subsidiary of the digital asset exchange based in the Cayman Islands.

According to the filing, Ripple believes that Binance has documents “relevant to the case and unobtainable through other means.” The document further asked the court to issue a letter of request for the Cayman Islands Central Authority to seek evidence from the digital currency exchange.

The legal team has filed for the motion to obtain against the regulator’s claim under Section 5 of the Securities Act of 1933, which only applies to domestic sales and offers of securities, in contrast to the agency’s statement of global violation.

As a result, the documents that the Ripple lawyers requested of Binance may demonstrate evidence in support of the claim. The legal team stated that the SEC has knowledged that Garlinghouse’s XRP tokens sales were mainly made on crypto exchange platforms outside of the United States jurisdiction.

Since the filing, Ripple CEO Brad Garlinghouse's motion to obtain international discovery has been granted, and the case continues as a settlement does not appear to be on the table.

XRP price continues to consolidate after its swing high on August 1. Ripple was rejected by the 200-day Simple Moving Average (SMA) that acted as stiff resistance and has further slid down below the 50% Fibonacci retracement level at $0.719.

Consequently, XRP price is now exposed to an 8% decline, should Ripple slice below the 61.8% Fibonacci retracement level at $0.669, further tagging the next downside target of the 50-day SMA at $0.659. The trading volume of the cross-border remittance token has also diminished, which indicates that buyers are nowhere to be found.

The cross-border remittance token should discover meaningful support at this level. However, should further selling pressure materialize, Ripple could fall into the demand barrier, extending from the 78.6% Fibonacci retracement level at $0.598 to $0.659. 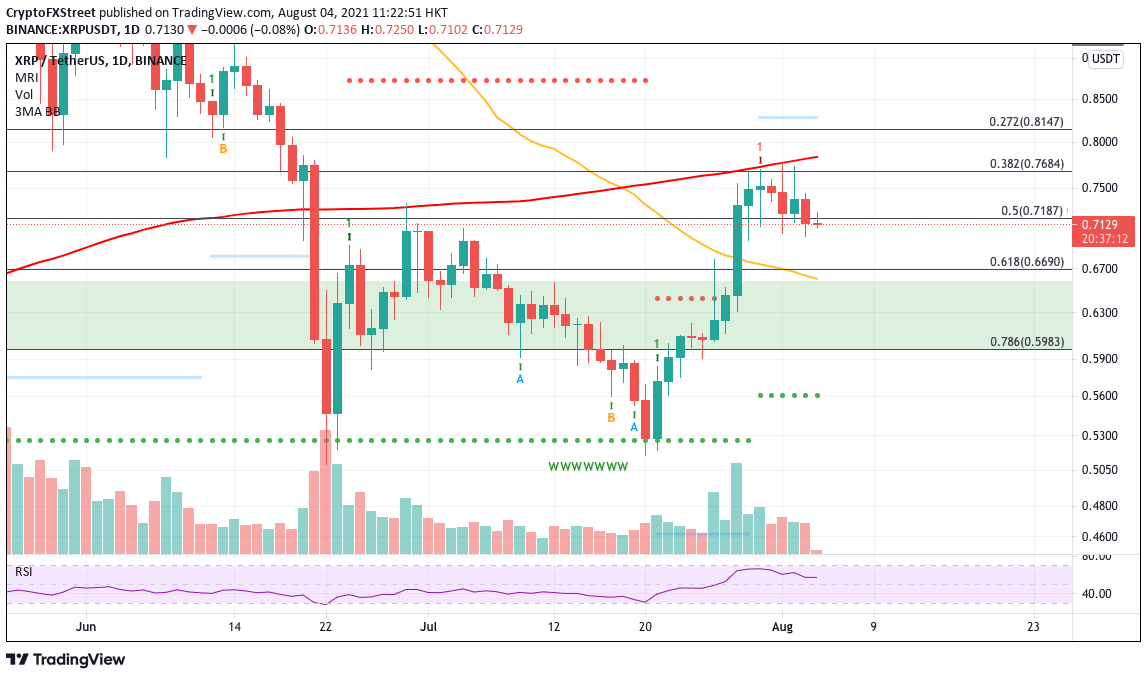 It appears that the upside potential for XRP price remains limited, constrained by the first level of resistance at the 38.2% Fibonacci retracement level at $0.768. The second obstacle for Ripple is the 200-day SMA at $0.783, which has trapped the token under this technical level with minimal bullish momentum for over a month.

Should XRP price manage to break above the two aforementioned resistance levels, Ripple could target the 27.2% Fibonacci retracement level at $0.815 next.