Blockchain technology has changed the way the world operates, and this is reflected by the action of Miami-based art collector Pablo Rodriguez-Fraile. The art collector decided to buy a ten-second video in October 2020. However, he did not know the same video will earn him $6.6 million several months later.

The 10-second video is the original work of a digital artist going by the name Beeple. The artist’s real name is Mike Winkelmann. His video stands out because it is authenticated by blockchain, providing a digital signature to ascertain the owner and prove that it is not counterfeit.

Simultaneously, a non-fungible token (NFT) is a new digital asset in existence amid the global pandemic. The cryptoasset allows investors and other enthusiasts to buy items that cannot be found anywhere else but online. Blockchain technology puts a signature on the items, certifying that they are the original versions and who owns them at any particular time. According to Rodriguez-Fraile:

You can go to the Louvre and take a picture of the Mona Lisa, and you can have it there, but it doesn’t have any value because it doesn’t have the provenance or the history of the work.

The reality here is that this is very, very valuable because of who is behind it.

OpenSea is the official marketplace for NFTs. It brings together buyers and sellers of these online-based objects. The sales volume has gone ballistic to $86 million from $8 million in less than 8 weeks. Despite the remarkable growth, investors are alarmed that a bubble is hovering. 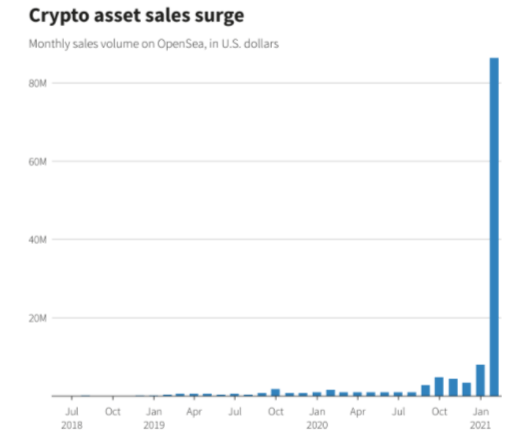 The rise of NFTs could also be a good sign for the cryptocurrency market, enabling mainstream adoption. Note that the ongoing action of digital art by Beeple will close on March 11. The auction house, Christie’s, will be accepting payment in Ethereum and fiat money.

CoinMarketCap describes NFT as “a special cryptographically-generated token that uses blockchain technology to link with a unique digital asset that cannot be replicated.” Some of the leading NFT tokens include Enjin Coin, Flow, and Decentraland.