A Bitcoin price analysis based solely on technical and on-chain analysis.

"Because only Chads and Steves care about the news."

Bitcoin price is in profit

Bitcoin price has validated the bearish trade setup forecasted throughout the week. The BTC price is halfway towards its first target but cautionary measures should be applied.

]Since August 1, the Bitcoin  price has been coiling within a wedge-like formation. Two weeks ago, while BTC price traded $22,800, many news headlines started calling for an imminent sell-off. A warning was issued to FX subscribers not to participate in the FUD as higher liquidity levels at $24,800 and potentially $25,400 stood a high chance at getting breached.

“Bitcoin price currently auctions at 23,905. There is a clear bearish divergence on the daily chart, prompting the sellers to aim for lower targets consistently. Still, the liquidity levels at $24,800 and $26,950 have not been breached. An ideal bearish scenario would be a breach into these levels….” 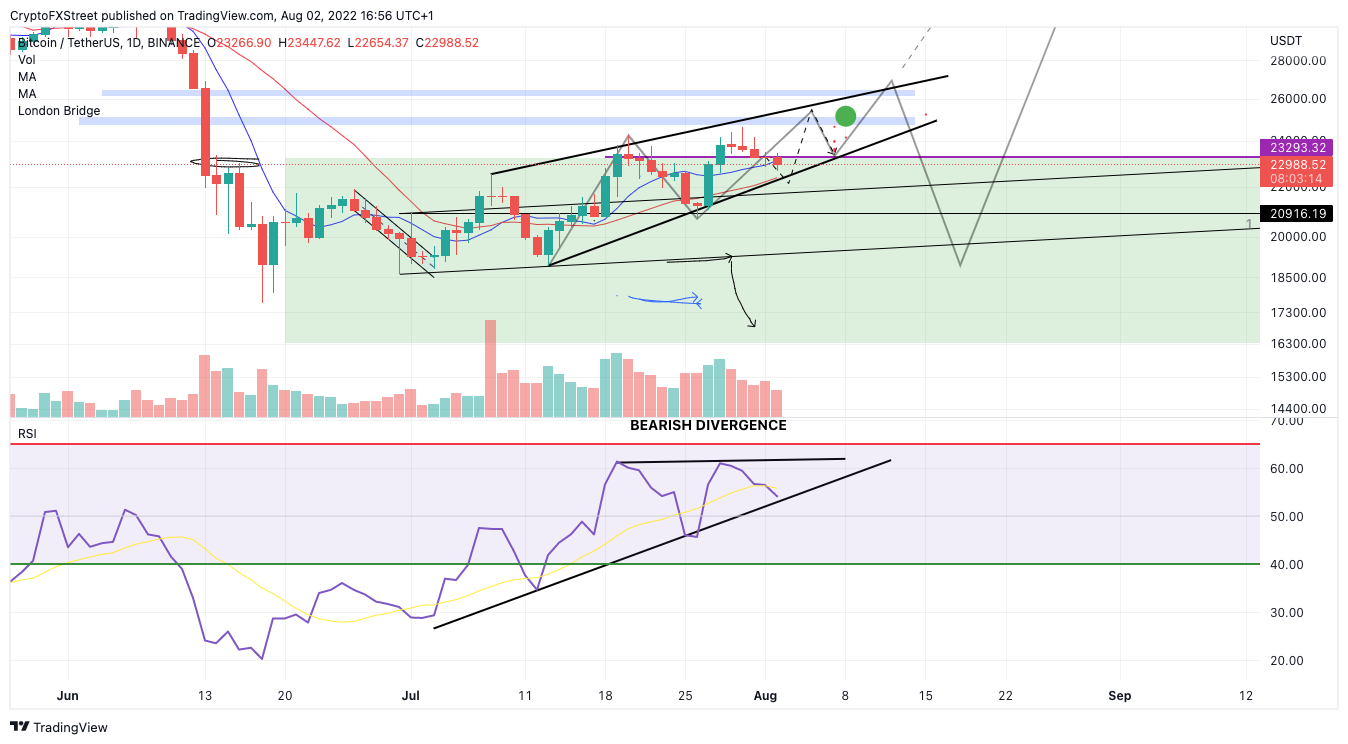 How To Trap A Hungry Bear Thesis

Bitcoin price managed to tag the first target at $24,800 and in doing so revealed more of the strength of its character for future price targets. A forecast was issued on August 18 calling for an end of the uptrend if and when $23,125 where to get breached,

“The safest way to approach this short will be a daily close below the level followed by a pullback into the breached trendline. If the bears can accomplish two attempts at $23,125 in said manner, a plummet of up to 20% will be on the cards, targeting $18,600.”

The following day an updated analysis provided justification for opening the anticipated short position as momentum and divergence provided more confidence in taking the trade.

“The last marker BTC price will need to justify opening a short position is a breach below $23,125 (as mentioned in previous outlooks). Invalidation of the downtrend scenario (providing that $23,125) is a breach above $26,800.”

The most noteable on-chain analysis, which confounded the current sell-off, was spotted seven days in advance on August 12.

"Additionally, Santiment’s Active Transactions Indicator  shiows  a considerable uptick in daily transactions. On May 4, May 14, and June 24, the indicator showed a similar sporadic upswing, each time followed by a minimum 20% plummet in the Bitcoin price shortly after.”

Because the weekend approaches a wider stop was issued to avoid being tagged by smart money operatives. Bitcoin price can still rally once more into the $25,000 to collect liquidity so it is best to either take profit now or at most near $18,900. Traders can also move the profitable trade into break even, or accept holding a very risky position over the weekend. For now traders who partook in the trade setup are currently in profit 0.5x times their initial risk capital and counting.