Shiba Inu price positively reacted to the United States inflation report, forming a bullish candle on its daily chart. The second-largest meme coin brushed shoulders with $0.00001287 but pulled back to test support highlighted by the 100-day Simple Moving Average (SMA) at $0.00001170. SHIB later recoiled, to trade at $0.00001236 at the time of writing while preparing to make a gigantic move to $0.00001743.

US inflation drops for the first time in 4 months

The cryptocurrency market reacted positively to an inflation report released on Thursday. Following a record spike to 9.1%, inflation in the world’s biggest economy fell to 8.5%, dwarfing market watchers’ expectation of a 0.2% drop. Analysts considered the possibility of a drop, citing a significant downswing in gasoline prices in July.

Shiba Inu price may continue outperforming its rivals like Dogecoin (DOGE) if a breakout presented by an inverse-head-and-shoulders (H&S) pattern confirms. Ideally, SHIB must make a clear break above the neckline resistance, as illustrated in the chart below. 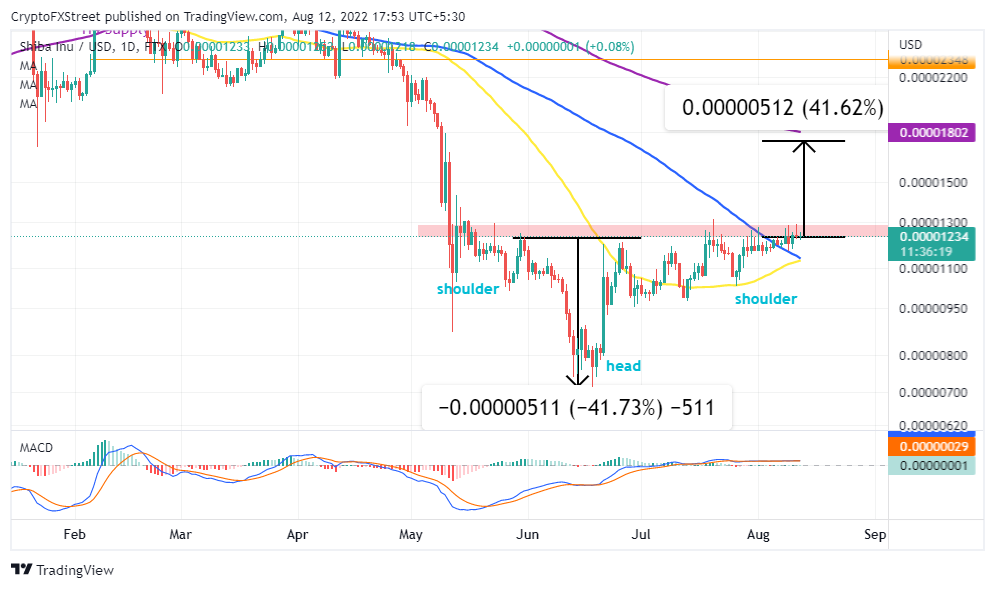 The same daily chart shows the 50-day Simple Moving Average (SMA) crossing above the 100-day SMA. Although this pattern is not a golden cross, its occurrence is a bullish gesture – coupled with the impending H&S breakout; they would render the 42% target relatively conservative.

Adding credence to Shiba Inu price optimistic narrative is a buy signal from the Moving Average Convergence Divergence (MACD). The tail force on SHIB is bound to increase as the MACD moves above the mean line.

The region around the H&S pattern’s neckline has been highly contested since the crash in May. For SHIB to break free, it has to put this seller congestion in the rearview mirror. According to IntoTheBlock’s IOMAP model, traders should consider booking profits in the lower band of the subsequent resistance shown at $0.00001400. However, Shiba Inu price might have the potential to eat into the resistance at $0.00001700.