Dogecoin plummeted from the recent massive surge to $0.88. The freefall was uncontrollable until the price hit support at $0.0218. As covered on Monday, DOGE was getting ready to lift off again, but a barrier at $0.055 capped the expected move. Meanwhile, the ‘Meme Coin’ is trading at $0.0336 as bulls push for gains back to $0.055.

As Dogecoin rallied last week, its co-founder Billy Markus claimed that he was being harassed again. He maintains that he is now targeted by a ‘mob’ of Dogecoin followers despite leaving the project in 2015. Markus clarified that he feels terrible he can still be trolled despite selling all his Dogecoin holdings.

The harassment began seven years ago but has resumed in the recent past, demanding that he execute some things on the project for them. In a Tweet, Markus stated:

Also, I don’t say this as a sob story – I’m financially fine – I just want to offer some perspective of what it feels like to have a mob demand you to do something for them on a project that you have no current involvement in, that you’ve seen others make many millions off of.

Dogecoin must break this crucial resistance to make a substantial recovery

The 4-hour chart shows DOGE dancing above all the applied moving averages, including the 200 Simple Moving Average, the 100 SMA, and 50 SMA. Notable is the distance the shorter term 50 SMA has made above the other indicators. It shows that buyers are relatively in control and can turn tables around for massive gains. 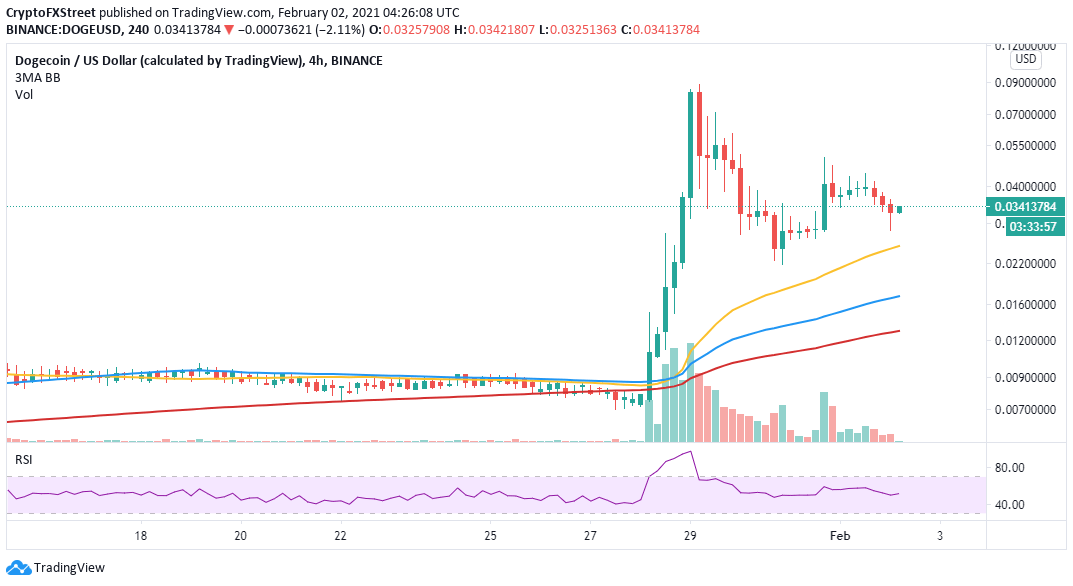 The TD Sequential indicators recently presented a buy signal on the hourly chart. The bullish call manifested in a red nine candlestick. If validated, Dogecoin will trade one to four hourly candlesticks. Moreover, breaking above the resistance at $0.037 is critical to the expected upswing toward $0.055.

According to the IOMAP model by IntoTheBlock, breaking above the short term hurdle at $0.037 remains a complicated affair. Note that the nearly 42,000 addresses had previously bought roughly 6.7 billion DOGE in the range running from $0.037 and $0.039.

While rising above this zone will be bullish for Dogecoin, failure to slice through it may see the price break down further. On the downside, the model reveals the lack of robust support.

However, we can focus on the range between $0.298 and $0.0308 to absorb a significant amount of the selling pressure, thus preventing a sharp drop. Note that 324 addresses are currently proofing from the approximately 1.7 billion DOGE previously bought in the range.