Dogecoin price has dropped massively since its peak in April. This steady decline is approaching a crucial demand barrier, a breakdown of which could lead to a cascading sell-off.

Elon Musk and his influence on cryptocurrencies

Tesla CEO Elon Musk has played a crucial role in appreciating the market value of Dogecoin and other meme coins. While his tweets used to send dog-themed cryptocurrencies soaring, lately his influence seems to be fading away.

Musk responded to one of the comments saying, “Lil X” (referring to this son) is “holding his Doge like a champ. Literally never said the word “sell” even once!”

Although the mention of “Dogecoin” propped up DOGE price on July 17, the dog-themed cryptocurrency continued its descent soon after, hinting at a huge selling pressure and the diminished influence of Musk over cryptocurrencies.

This comment follows a February 10 tweet where the Tesla CEO noted he bought some “Dogecoin for lil x.”

Bought some Dogecoin for lil X, so he can be a toddler hodler

While Musk continues to lose his sway over the meme coins, technicals for DOGE paint red flags and warn of an incoming sell-off.

Dogecoin price has dropped 76% from its peak in April to where it currently stands – $0.178. Over the past week, DOGE has slid 18% and roughly 40% since June 19, indicating that the investors are offloading their holdings.

While Musk’s tweet on July 17 temporarily propped up the price, the sell-off has resumed. If Dogecoin price continues to tumble, it will approach the $0.161 support level, which forms the neckline of a head-and-shoulders pattern.

This technical formation contains three distinctive peaks, with the central swing point higher than the other two referred to as the “head.” The swing highs on either side are known as “shoulders.”

All the peaks bounce from a support level at $0.161 called the “neckline.”

The setup forecasts a 78% decline to $0.018, determined by adding the distance between the head’s peak and the neckline to the breakout point at $0.161.

Therefore investors need to keep a close eye on a decisive daily candlestick close below the said level as it will confirm the start of a downtrend.

The demand zone extending from $0.045 to $0.088 might absorb the selling pressure and even contain it, but an increased bearish momentum could easily slice through this barrier. 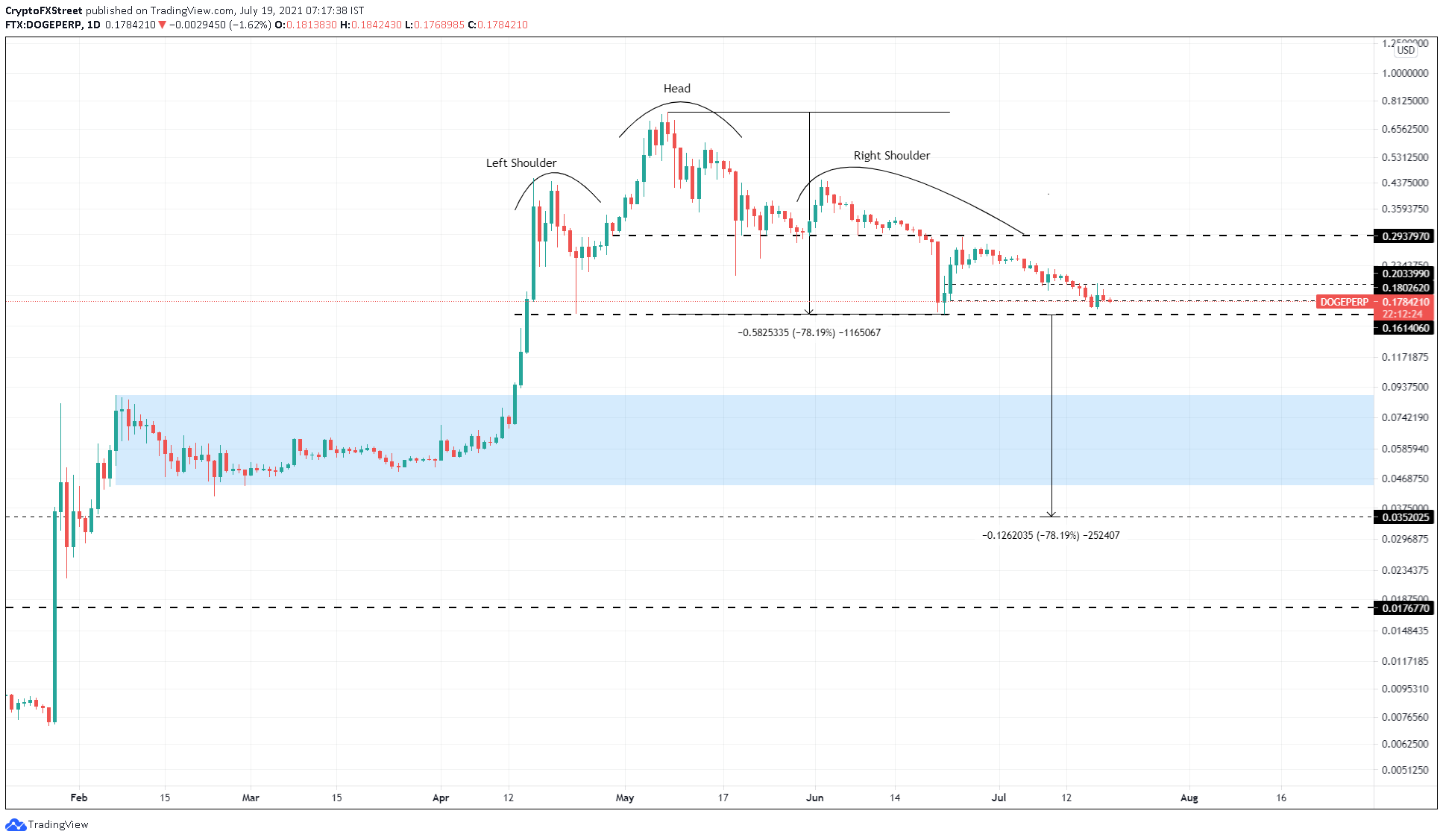 On the flip side, the sell-off can be delayed if Dogecoin price manages to stay above the neckline at $0.161.

Although unlikely, DOGE needs to rally 81% and produce a decisive daily candlestick close above $0.294 to invalidate this bearish thesis.