Bitcoin price seems to be recuperating from the losses witnessed last week. While institutional investors’ ETF applications are helping bolster the adoption curve and hasten the process, several on-chain metrics combined with the developments surrounding regulating BTC mining in China and Iran has put a nail in the recovery’s coffin.

Adding a semblance of hope to this delay in adoption is Ray Dalio’s announcement on May 24. The founder of the renowned Bridgewater hedge fund revealed that he was a Bitcoin holder. Despite appreciating the digital asset’s features and capabilities, Dalio warned investors that the increasing popularity of Bitcoin among investors might attract severe regulatory blowback from authorities.

Adding a tailwind to Bitcoin price recovery is the accumulation of BTC from whales during the recent crash on May 19. This development suggests that despite a 51% drawdown from the all-time high, investors are keen on acquiring the pioneer cryptocurrency, which speaks volumes to their bullishness on it.

Chainalysis noted in a recent report that whales bought roughly 77,000 BTC worth nearly $2.85 billion at the time of writing. Despite the mounting buying pressure, the market sell-offs on May 19 or May 23 were caused by the combined efforts of Elon Musk, the state of the cryptocurrency market and China.

Elon Musk reignited the age-old debate about using fossil fuels for mining Bitcoin when he revealed that Tesla would no longer accept BTC as payment. His remarks sent shockwaves across the cryptocurrency market as Bitcoin price started a new descent.

China added fuel to the flame when reports of a mining ban spread like wildfire, tanking BTC price as low as $30,000. This debate was put to rest when MicroStrategy CEO Michael Saylor set up a Bitcoin Council to promote energy usage transparency to "accelerate sustainability initiatives worldwide."

While Iran is enforcing an outright ban, Sichuan’s government officials plan to host a seminar next week to identify the impact of the Bitcoin mining ban on hydroelectricity excess. Although the decision is yet to be made, its effects are already being felt in the Chinese mining ecosystem.

For instance, the Antminer S19 equipment cost has gone down from $12,000 to $8,000 in anticipation of the government’s anti-mining policy.

Interestingly, the pioneer cryptocurrency appears to be building up toward a potential top in the form of a head-and-shoulders pattern. A breakdown of the neckline at $29,936 could confirm the start of a bearish reversal. In that case, the setup forecasts a 53.85% retracement, obtained by adding the distance between the head’s peak and the neckline to the breakout point.

Adding credence to a short-term bearish outlook is the move of the 50-day SMA below the 100-day SMA, forming a death cross on May 23. This development suggests that the short-term bearish momentum is increasing faster than the buying pressure. 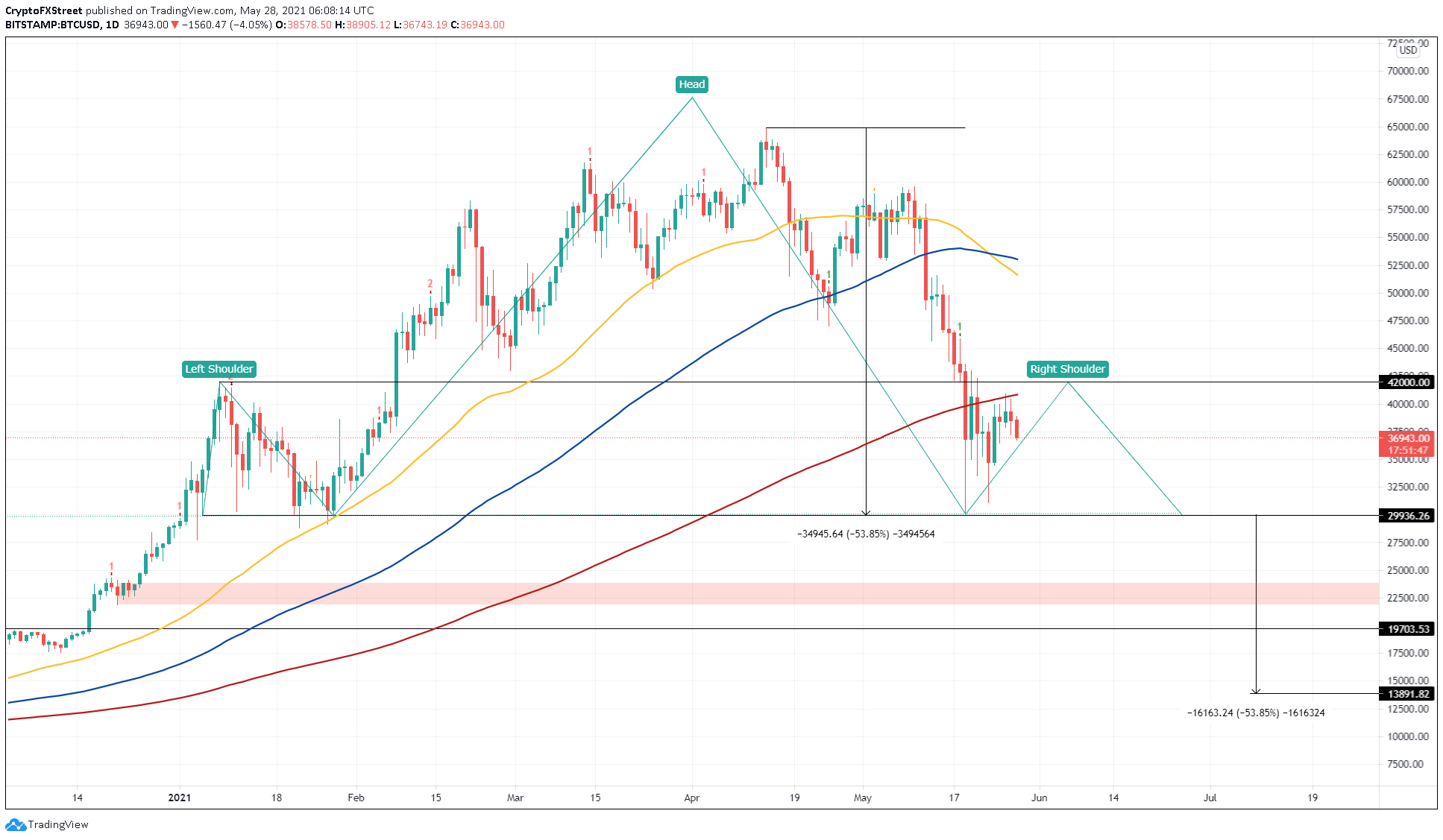 Perhaps the most crucial on-chain data that suggests a bearish outlook is the 50-day average of the Unspent Transaction Outputs (UTXOs) in profit. According to Glassnode, this metric tracks “the percentage of unspent transaction outputs whose price at creation time was lower than the current price.”

The 50-day average of this model is used to identify cycle tops. This metric is currently 95.11%, a level BTC was during the peak of the 2017 bull run in December, adding a tailwind to the bearish narrative detailed above. 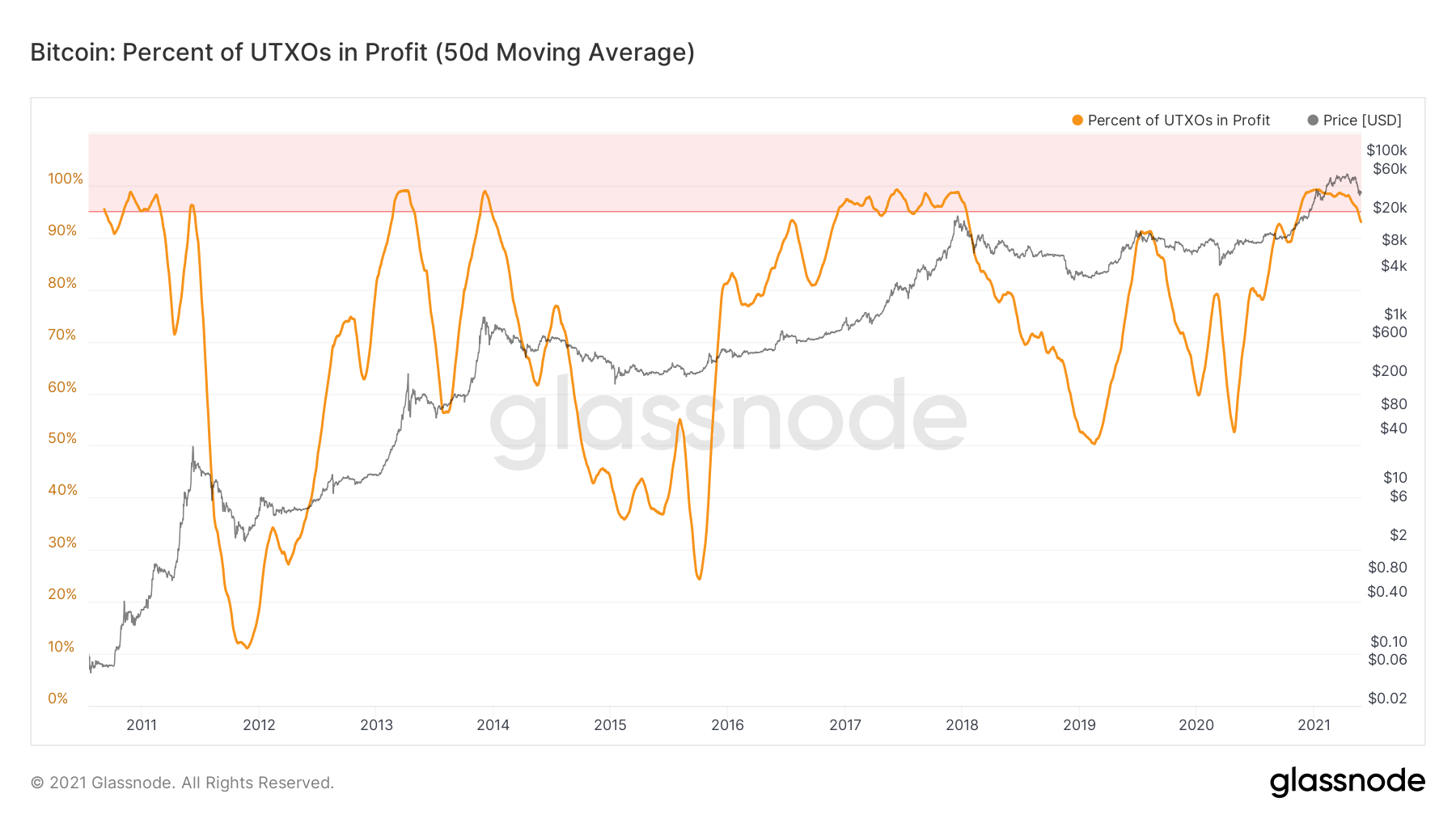 Also supporting the grim outlook for the flagship cryptocurrency is the 365-day Market Value to Realized Value (MVRV) model, which suggests more room for a downside move.

This fundamental index measures the profit/loss of investors who purchased BTC in the past year. While the recent crash tanked MVRV from 118% to 1.77%, there is a chance that it will dip into negative territory, aka the opportunity zone.

Such a move will suggest that the short-term investors are selling, providing an “opportunity” for the long-term holders to accumulate.

If the supply of BTC on an exchange increases, it is bearish since it directly adds to the sell-side pressure. Although this metric increased from 1.87 million to 1.97 between April 30 and May 17, it has decreased by 2% to date.

While this decline is relatively insignificant, investors should keep a close eye on this index.

A popular technical analyst with the screen name “dave the wave” points out the “elephant in the room,” as he describes that Bitcoin price is not out of the woods yet.

He reveals that the Moving Average Convergence Divergence (MACD) indicator has not yet noticed a bearish crossover despite the brutal sell-off from roughly $50,000 to $30,000.

As grim as it may sound, Bitcoin price still has room to head higher, at least until $42,000. The bearish thesis put forth by the head-and-shoulders technical pattern will face invalidation if BTC generates a decisive daily candlestick close above the resistance level at $42,000.

Further supporting this bullish outlook is the low funding rate for BTC futures, which is less than 0.01% on major cryptocurrency exchanges, promoting a quick recovery. 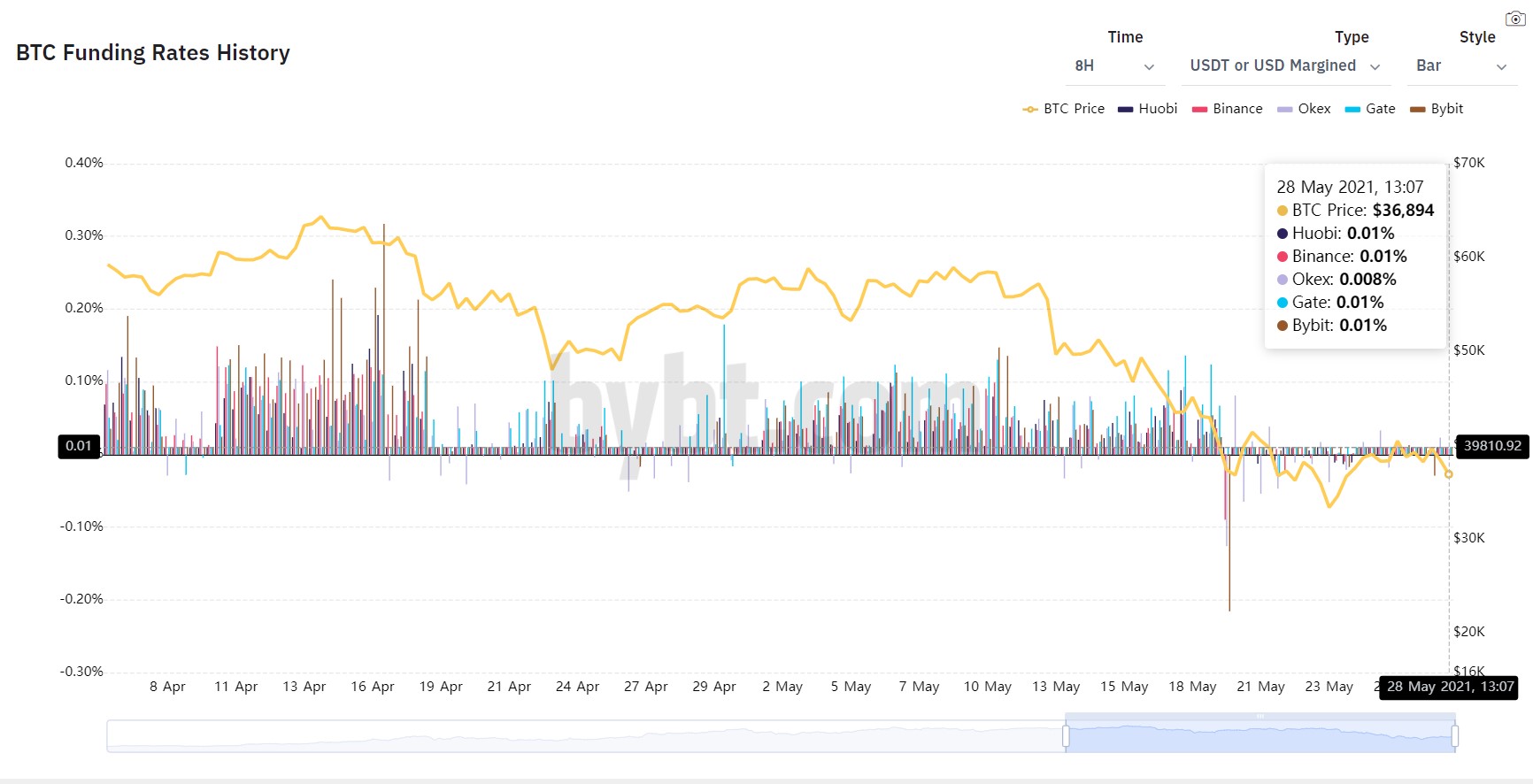 A similar bullish outlook is observed in premium for Grayscale’s GBTC product, which has increased from -21.23% to -11.36% between May 14 and today. This uptick suggests a revitalized interest from investors who are interested in Bitcoin price at the current levels.

When the positives are added to the negatives, Bitcoin price is at an inflection point, and nothing is set in stone yet. A sharp decline that breaches the support level at $29,936 indicates the start of a 54% sell-off. However, a decisive daily candlestick close above $42,000 suggests a potential 27% rally to $56,650.

Why you should capitalize on this 60% upswing in Solana price

Solana price shows an interesting divergence on the high time frame chart that could kick-start a much needed swing rally. Therefore, investors need to pay close attention to SOL.

ApeCoin continues to fall as bears aim for $5.00

ApeCoin exhibits full bearish control. A drop towards the $5.00 target is a high probability occurrence in the near future. ApeCoin price is still following the macro technicals forecasting a $2.00 target. Invalidation of the bearish thesis is a breach above $13.50.

Binance Coin price could be setting up for a plummet back to $217. Binance Coin price has breached the ascending parallel channel to start this Friday's trading session. This week, it was mentioned that the future for BNB price was highly dependent on the directional breakout from the channel.