The World Gold Council believes that gold may face similar dynamics in 2022 to those of last year. Well, I’m not so sure about it.

Have you ever had the feeling that all of this has already happened and you are in a time loop, repeating Groundhog Day? I have. For instance, I’m pretty sure that I have already written the Fundamental Gold Report with a reference to pop-culture before…

Anyway, I’m asking you this, because the World Gold Council warns us against the whole groundhog year for the gold market. In its “Gold Outlook 2022,” the gold industry organization writes that “gold may face similar dynamics in 2022 to those of last year.”

The reason is that in 2021, gold was under the influence of two competing forces. These factors were the increasing interest rates and rising inflation, especially strong in operation in the second half of the year, which resulted in the sideways trend in the gold market, as the chart below shows. The WGC sees a similar tug of war in 2022: the hikes in the federal funds rate could create downward pressure for gold, but at the same time, elevated inflation will likely create a tailwind for gold. 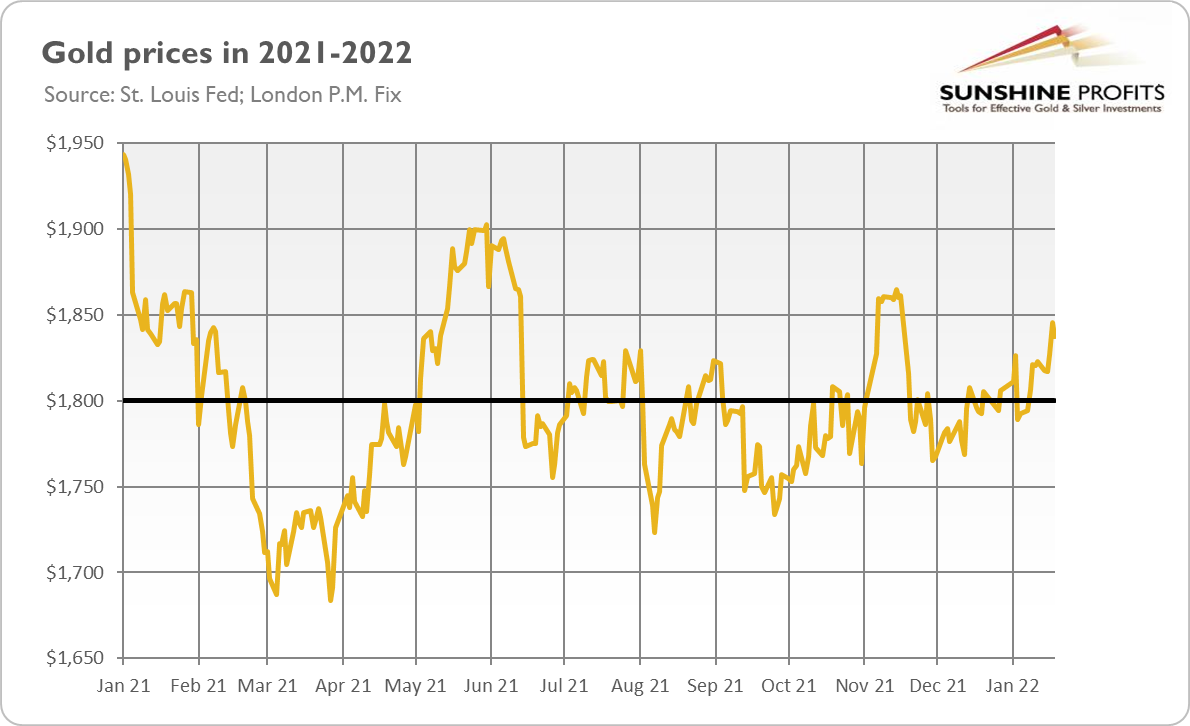 The WGC acknowledges that the ongoing tightening of monetary policy can be an important headwind for gold. However, it notes two important caveats. First, the Fed has a clear dovish bias and often overpromises when it comes to hawkish actions. For example, in the previous tightening cycle, “the Fed has tended not to tighten monetary policy as aggressively as members of the committee had initially expected.”

Second, financial market expectations are more important for gold prices than actual events. As a result, “gold has historically underperformed in the months leading up to a Fed tightening cycle, only to significantly outperform in the months following the first rate hike.”

I totally agree. I emphasized many times the Fed’s dovish bias and that the actual interest rate hikes could be actually better for gold than their prospects. After all, gold bottomed out in December 2015, when the Fed raised interest rates for the first time since the Great Recession.

I also concur with the WGC that inflation may linger this year. Expectations that inflation will quickly dissipate are clearly too optimistic. As China is trying right now to contain the spread of the Omicron variant of the coronavirus, supply chain disruptions may worsen, contributing to elevated inflation. However, although I expect inflation to remain high, I believe that it will cool down in 2022. If so, the real interest rates are likely to increase, creating a downward pressure on gold prices.

I also believe that the WGC is too optimistic when it comes to the real interest rates and their impact on the yellow metal. According to the report, despite the rate hikes, the real interest rates will stay low from a historical perspective, supporting gold prices. Although true, investors should remember that changes in economic variables are usually more important than their levels. Hence, the rebound in interest rates may still be harmful for the precious metals.

What should be expected for gold in 2022? Will this year be similar to 2021? Well, just like last year, gold will find itself caught between a hawkish Fed and high inflation. Hence, some similarities are possible.

However, in reality, we are not in a time loop and don’t have to report on Groundhog Day (phew, what a relief!). The arrow of time continues its inexorable movement into the future. Thus, market conditions evolve and history never repeats itself, but only rhymes. Thus, I bet that 2022 will be different than 2021 for gold, and we will see more volatility this year.

In our particular situation, the mere expectations of a more hawkish Fed are evolving into actual actions. This is good news for the gold market, although the likely peak in inflation and normalization of real interest rates could be an important headwind for gold this year. Tomorrow, we will get to know the FOMC’s first decision on monetary policy this year, which could shake the gold market but also provide more clues for the future. Stay tuned!