Last Thursday’s signals were not triggered, as there was no sufficiently bearish price action at either 1.0058 or 1.0110.

I wrote last Thursday that if the price could trade for a couple of hours above 1.0058 it would still be a good bullish sign. Overall, I felt more comfortable taking long trades in this pair than short trades. This was a good call as the price continued to rise beyond 1.0058 that day until it peaked at 1.0124, a long-term high price. However, the Dollar then sold off at the end of the week, leaving the price here significantly lower, with a short-term bearish trend, and resistance levels re-established in the 1.0100 area.

This pair is usually extremely mean-reverting, which suggests that as we are at an area of long-term resistance at a price extreme, short trades are going to become interesting if you have the patience to hold tight while the price takes its time moving down.

A break below 1.0058 would be a bearish sign so that is quite likely to be today’s pivotal level. I have no directional bias today on this pair. 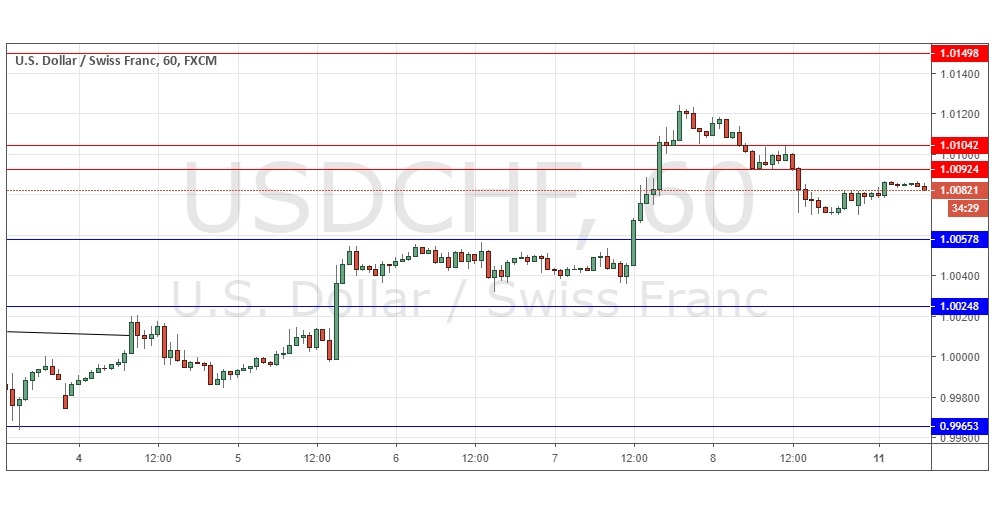 There is nothing of high importance due today concerning the CHF. Regarding the USD, there will be a release of Retail Sales data at 1:30pm London time followed at 1:00am by a minor speech from the Chair of the Federal Reserve.