Canadian employment rebounded in June adding just under a quarter of a million jobs, but it was the recovery in crude prices on Friday that reversed four straight days of US dollar gains.

West Texas Intermediate (WTI), the New World crude oil pricing standard, executed a reverse move, falling for three days as the Organization of Petroleum Exporting Countries (OPEC) failed to settle a disagreement over production curbs. Wednesday’s finish at $71.66 came after two days of heavy losses had dropped the barrel price of WTI 5.3% from Monday’s close at $75.71. Part of the virulence of the two-day decline came from its technical aspect, breaking the steep uptrend that extended back to May 21 and had represented a 22.5% increase.

The 3.3% rebound in WTI from Wednesday combined with the positive Canadian employment report dropped the USD/CAD back to 1.2444, points from where it closed on July 1.

Expectations for an exceptional US recovery encountered more realism this week.

Employment indexes in services and manufacturing contracted in June and initial jobless claims rose to 373,000 in the July 2 week. The Job Openings and Labor Turnover Survey (JOLTS) registered 9.203 million unfilled positions in May, the most on record after April's  9.286 million was revised to 9.193 million.

Will the sustained weakness in hiring abate once the supplemental federal unemployment payments expire in September, easing the labor shortage that is stymying full recovery?  Or will consumer demand fade as millions of workers lose their immediate income in the last month of the third quarter?

After a year and a half of COVID, the US is finally losing the last restrictions, but how will the new Delta variant, less dangerous but more communicable, affect the recovery?

Federal Reserve Chair Jerome Powell and the Projection Materials acknowledged the good economy, and a bond taper is clearly the next policy move, but there is no evident urgency in official minutes of the June meeting.

Chair Powell’s observations in his news conference did nothing to advance the timetable. There is one more FOMC meeting in late July before the bank’s annual Jackson Hole symposium at the end of August, which is expected to be a platform for explaining the logic and timing of a policy change.

A reduction in the $120 billion bond purchase program, which seemed so close in May and June, has been put off into an interminable future.

The Treasury yield curve has considerably flattened in July, but the reduction in long-term rates removes the premium that had been installed since late February in anticipation of a pending taper. It is not a judgement on the condition of the US economy.

The dollar performance this week is a reminder that foreign exchange values are established in pairs.

American economic statistics have been somewhat equivocal this month, primarily in the labor market, but the dollar has lost little of the edge established since the June Federal Open Market Committee (FOMC) meeting.

American growth and pandemic prospects are, with the possible exception of the UK, the most sanguine in the world, and that is reflected in the dollar’s position.

The Fed forecasts for 7% growth and 3.4% headline inflation, if accurate, would be the strongest results in decades. Except for the Bank of Canada – which has reduced its monthly bond purchases by one billion Canadian dollars, a move possible only because the Fed is still pumping $120 billion into the US economy – the projection of two rate increases in 2023 is a most optimistic official pronouncement.

Canada’s Net Change in Employment for June was better than forecast and at 230,700 almost made up the prior two losses of 275,100. The Ivey Purchasing Managers’ Index for June jumped to 71.9, its best level since March.

The Bank of Canada (BOC) meeting on Wednesday heads the agenda this week. The C$1 billion reduction in the bank’s asset purchases to C$3 billion at the April 21 meeting was a major factor in the 4.6% drop of the USD/CAD over the subsequent six weeks.

Since then the Federal Reserve has become substantially more hawkish with its June forecasts, though no taper action is expected until the fourth quarter at the earliest.

If the BOC eliminates another C$1 billion in bond purchases, it will bring the taper advantage back to the Canadian dollar.

Consolidation between 1.2350 and 1.2500 is most likely until the BOC meeting. The USD/CAD should rise if there is no bond reduction and fall, perhaps sharply, if Governor Tiff Macklem surprises the markets and executes a further cut.

The economic data focus will remain on the US dollar side of the USD/CAD. The greenback needs good US statistics, particularly in the job market, and rising or at least stable Treasury yields, to improve.

For the Canadian dollar oil is the key ingredient, a link made obvious again this week.

Historically, WTI is near the top of its six-year price range and with doubts beginning to creep in about the strength of the global economic recovery and the desire of several OPEC states to increase production, it is uncertain how much further oil can rise. Weakness in WTI will undermine the Canadian dollar. 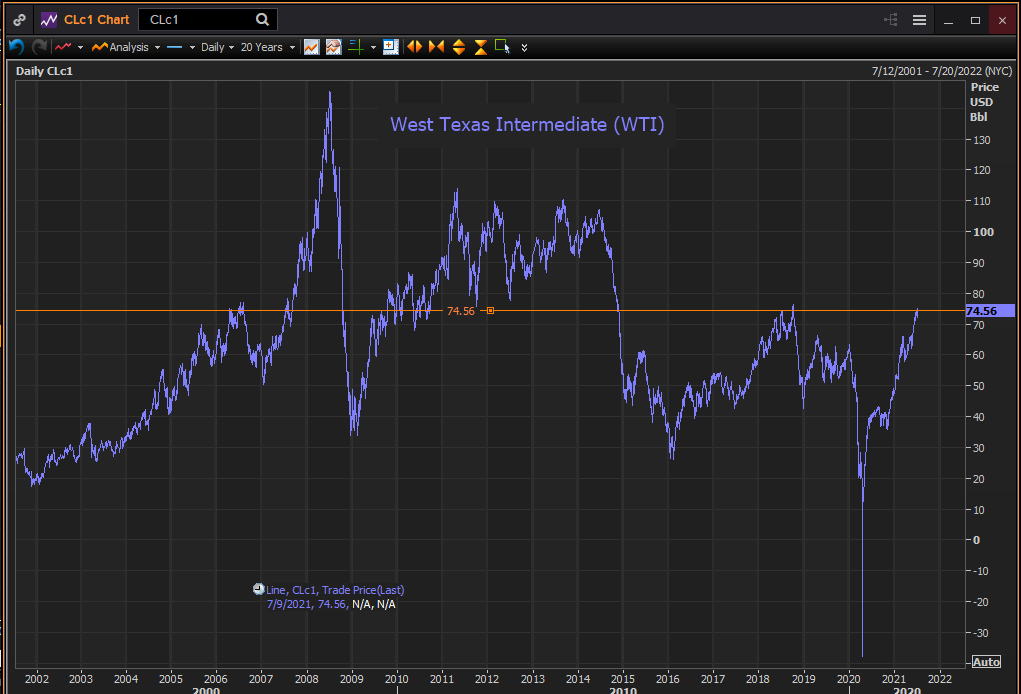 Given the precipitous drop in US  long-term Treasury yields, the dollar’s resiliency is testimony to the relative position of the American economy versus its currency competitors. The US is in better shape than all of its trading partners. Even the UK will not fully lift its COVID restrictions for another eight days.

Headline CPI data for the US is expected to confirm the Fed’s temporary thesis with a slight drop in June’s annual rate, but there will be no market reaction.

Retail Sales on Friday is another story. The US economy is consumer driven and after May’s larger-than-expected drop in consumption a healthy rebound in June is needed for reassurance. If that is not forthcoming the speculation that the US recovery is slowing will grow, Treasury rates will fall and the dollar will likely drift lower.

The MACD was still a buy on Friday though weaker than earlier in the week. The Relative Strength Index (RSI) and True Range have positive but diminished upward momentum. Friday's nearly one figure drop (1.2540-1.2443) cashed in much of the energy from Tuesday's lunge higher, but the USD/CAD remained above its five-week-old positive trend lines.

The USD/CAD has recovered from the BOC taper dip from 1.2600 to 1.2034 that ran from April 21 to June 2. The Fed's hawkish forecasts at the June 16 FOMC greatly assisted the move higher. Above 1.2500 the USD/CAD encounters the relatively stable pricing that ran from the middle of March through the April 21 BOC meeting (1.2500-1.2650). That area is replete with well-traded resistance lines and should hold unless there is a notable change in the fundamental economic or rate picture. The Canadian dollar is particularly sensitive to oil pricing, and a drop in WTI is the most likely candidate for sending the USD/CAD higher.

The FXStreet USD/CAD Forecast Poll is balanced in the near-term and weighted to technical resistance out to one quarter. Without a change in the fundamental picture, that is the reasonable scenario.