The Canadian economy had a rousing employment report in March with more than three times as many jobs created as had been forecast.

Yet with rising virus cases in several provinces, a new lockdown in Ontario, meandering Oil prices and resilient US treasury rates, the USD/CAD could not break new ground. The pair finished at 1.2532, on the low side of the week’s 1.2502-1.2634 range and more than a figure from its three-year bottom of 1.2365 on March 18. 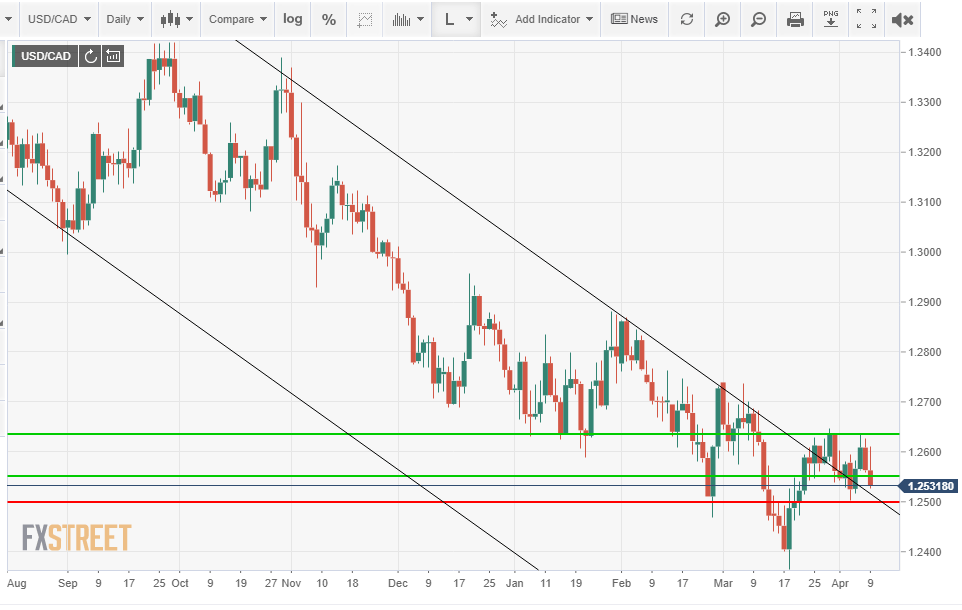 Canada and the United States have symbiotic economies. When one thrives in most cases so does the other. March employment numbers, 916,000 south of the 49th parallel and 303,100 north, both much stronger than forecast, are a good example. A possible divergence lies ahead as another wave of the pandemic is prompting closures in Canada, while none are contemplated in any states in the US.

Canada’s chief public health officer, Dr. Teresa Tam, warned on Friday that "the race" between vaccination and COVID-19 variants is at a "critical point."

The Toronto school system was ordered closed for two weeks and the province of Ontario instituted a one-month lockdown on April 3.

Although Michigan, New York and several other, primarily Northeast states have rising caseloads and scattered schools have been temporarily closed, US numbers are far below the winter wave, and lockdowns have become political dynamite.

A chief difference in the economic prognosis is that in the US nearly one-third of the total population and 75% of those over 65 years old have received at least one vaccination. In Canada just 12% of the population was protected by the end of March.

Crude prices fell 3% from Monday’s open to Tuesday's close, $61.19 to $59.24, and then drifted for the balance of the week. West Texas Intermediate (WTI) closed at $59.39 on Friday. Prices have been essentially unchanged since the 7.5% plunge on March 18 broke the November channel to finish that day at $59.59. 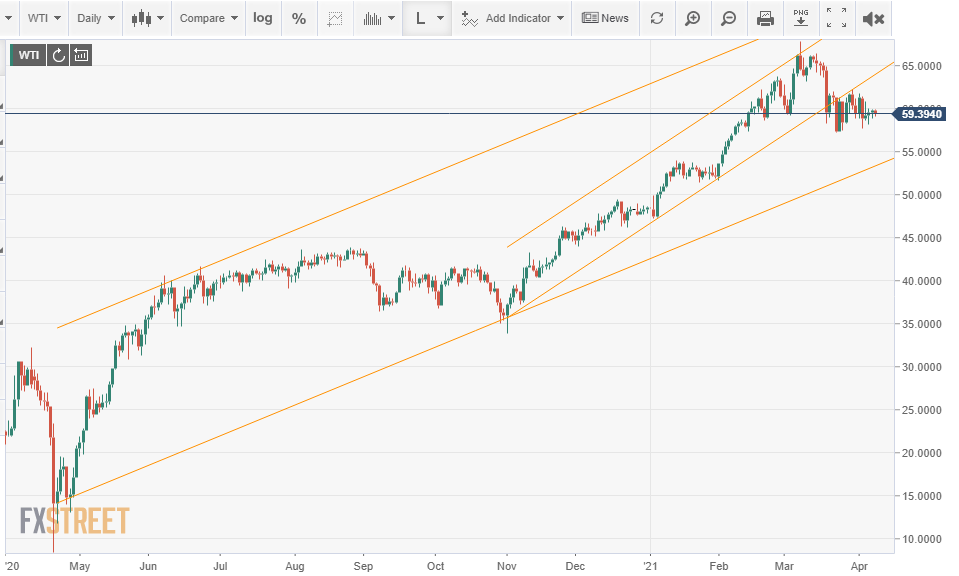 American 10-year Treasury yields lost nine basis points from Monday’s open at 1.72% to the Thursday close at 1.632%, and that weighed on the USD/CAD for most of the week. Friday’s three-point recovery to 1.662% helped blunt the positive impact of the excellent Canadian March employment report on the loonie.

Canadian and US economic data

The March Ivey Purchasing Managers’ Index (PMI) was also a standout. It soared to 72.9, from 60 in February, far beyond the 60.5 consensus improvement.

In the US evidence continued to mount toward recovery. The service sector PMI polled 63.7 in March, a record for its 24-year history, with strong showings as well in the New Orders and Employment gauges.

Initial Jobless Claims in the April 2 week at 744,000 were much higher than the 680,000 estimate but had no market impact. Layoffs are now retrograde, looking back to the pandemic lockdowns rather than ahead to economic recovery.

Inflation reared a bit higher with the March Producer Price Index (PPI) rising 1% on the month and 4.2% on the year, well ahead of the 0.5% and 3.8% forecasts.

Normally,  PPI increases carry over to consumer pricing within a few months. In the current economic situation, after a year of business failures, it is uncertain if retailers have sufficient confidence in sales to raise prices.

Federal Reserve Chair Jerome Powell, speaking at an International Monetary Fund (IMF) panel on Thursday, said the outlook for the US economy had brightened but that the slow pace of global vaccinations and rising COVID-19 cases in the US are risks and that he expects they will slow the recovery. Commenting on the Nonfarm Payrolls report, Mr. Powell said the Fed would want to see several more months of like results for progress to its employment goals.

The minutes of the March 16-17 FOMC meeting also seemed to undermine the notion that the improving US data was bringing the central bank to consider when and how to elide its bond purchases of $120 billion a month.

These views from the Chair and the governors were not new. Similar statements have been made many times over the past six months, but by repeating them after a spate of very strong US data, they served to quell speculation that a change in rate policy was brewing. Such anticipation has been one of the drivers of the steep rise in Treasury yields and the dollar.

The Canadian dollar is the sole pair among the majors that has retained all, or almost all, of its pandemic gains against the US currency. The USD/CAD is just over one-and-a-half figures above its three-year low and has been unable to rise above resistance at 1.2630-35. 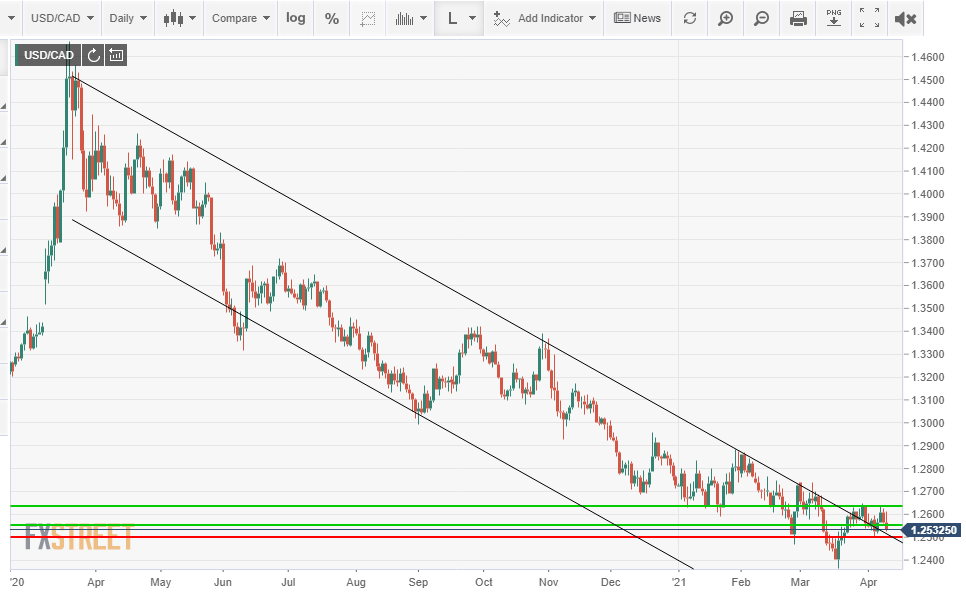 The ability of the loonie to resist the siren call of higher US interest rates is based on three factors.

First, Canadian interest rates have largely kept pace with those in the US depriving the US dollar of a key advantage it holds against other currencies.

Second, although WTI has pulled back from its early March high above $65, the pending global recovery will, it is assumed, push prices higher at some point this year. At the least, prices have maintained the range from the second half of 2019.

Third, Canada and the US share the longest undefended border in the world, and it is an appropriate symbol for the intertwined economies of the two nations. The US vaccination program has been among the most successful in the world, and it has given the economy a fast track to recovery. Growth is expected to top 6% this year, and Canada will share extensively in that expansion.

The rejection of the USD/CAD at 1.2630 for the second week and the close of a figure below tilts the prospect to another attempt at the 1.2500 support.

The fundamental economic and rate advantages for the Canadian dollar could come under pressure this week as the country faces greater problems from another wave of the virus than does the US. But the evidence of that is still some weeks away and the odds of a major breakdown in Canada, at any rate, are not high.

A break of 1.2500 would have the USD/CAD reenter the year-old descending channel but that will not be a decisive event and it will not, on its own, counter US interest rates.

An appreciable advance in US interest rates given the potential, if temporary, Canadian economic weakness might be enough to retest 1.2630, but it will not negate the other loonie advantages.

The USD/CAD is not likely to travel far in either direction.

An excellent March payroll report and Ivey PMI were the central interests this week.

The US economy accelerated in March with business optimism in the service sector reaching an all time-high. The Purchasing Managers Index (PMI) at 63.7 and the New Orders Index at 67.2 were records for the 24-year-old series.

The Employment Index had the best score in 22 months. This data built on last week’s equally good PMI levels in manufacturing and the excellent payroll report that saw nearly one million people hired last month.

The FOMC minutes of the March 16-17 meeting repeated the Fed insistence that full economic recovery must come before the bank reduces its bond purchase program that is repressing the short end of the yield curve. 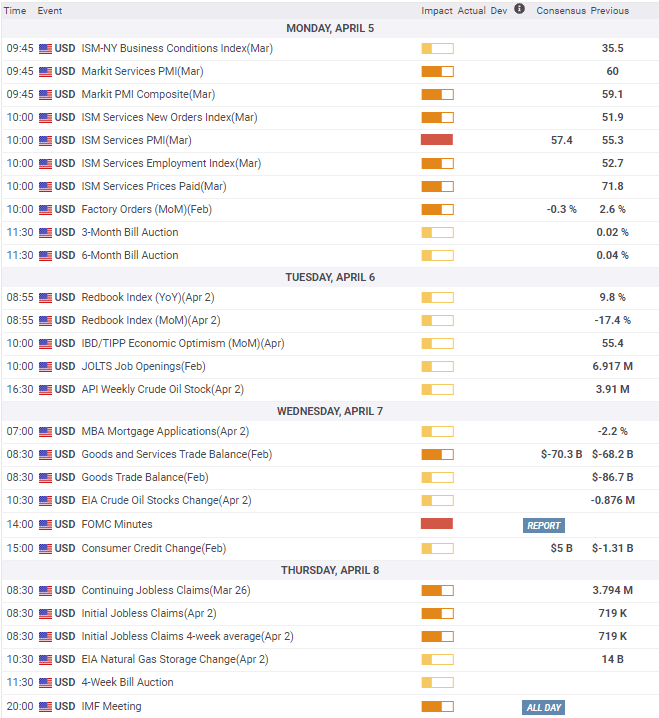 Retail Sales in March will garner the most attention and should confirm the economy’s acceleration. Consumer prices are next in interest even though the Federal Reserve has removed them from active policy consideration. 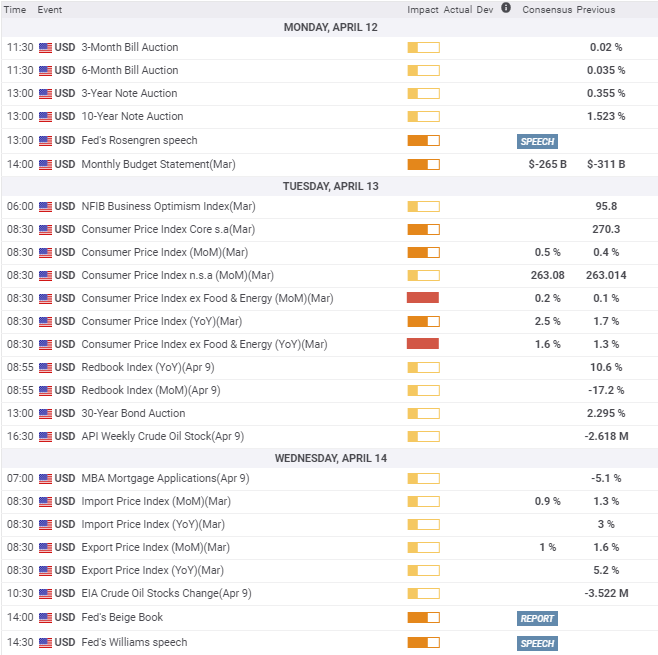 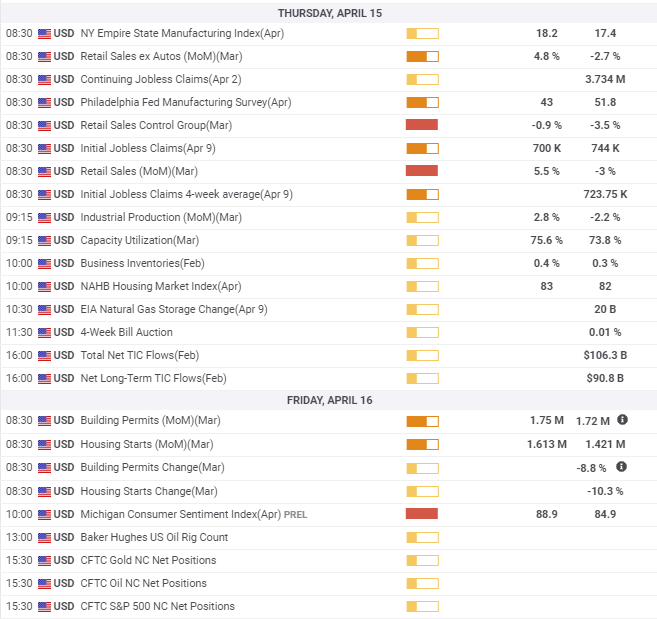 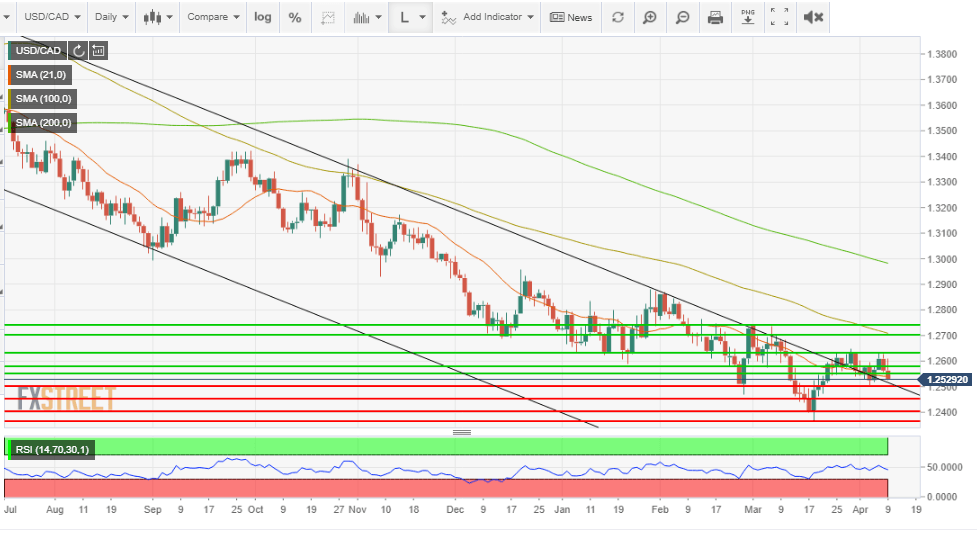 Since its rebound from the March 18 low the USDCAD has traded in a one-figure range from 1.2530 to 1.2630. Of the 13 sessions after the move above 1.2500 on March 23, six had contact with the upper border of the range and four with the lower. One was counted in both groups. It is unusual for a major currency pair to maintain a long trend without any correction, but the shift to a US dollar advantage this year, spurred by a modest rise in American Treasury rates, has not been overpowering or decisive. In the Canadian dollar's case, it has been effectively countered by the loonie's own advantages.

Support and resistance levels are equally arrayed and largely balanced, though the far greater volume of trading above the current level gives some added strength to the cap that begins at 1.2630. The support lines reference the brief seven-session dip below 1.2530 from March 12 to March 22. Prior to that, the USD/CAD had not been below 1.2500 for three years. 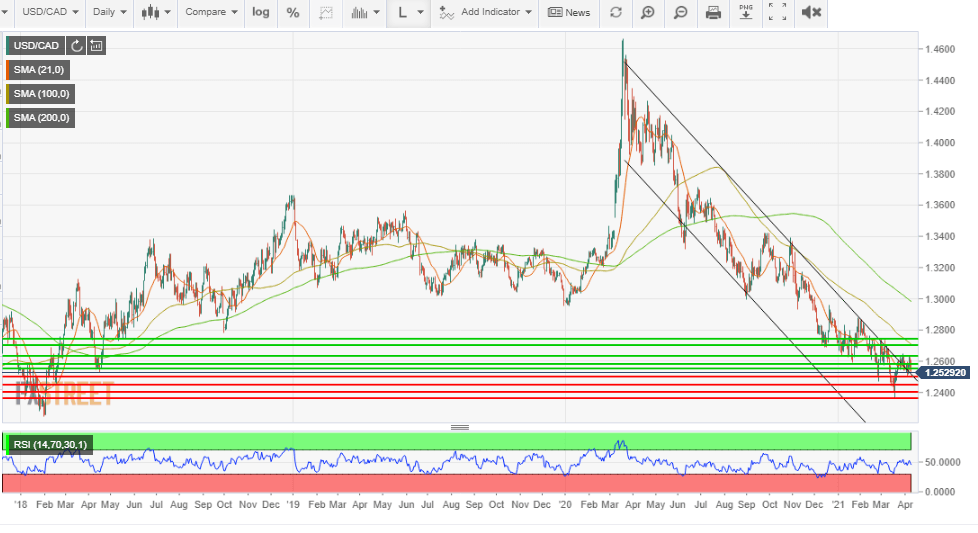 The FXStreet Forecast Poll shows balanced fundamental and technical forces operating on the USD/CAD. From one week to one quarter, the range is 18 points. Given the potential developments in the next three months such stasis is not likely to last, but the direction of the USD/CAD awaits a change of fortune.