The Canadian dollar is ending the week with substantial losses against its American rival, with the USD/CAD pair up for a second consecutive week. This Friday, disappointing Canadian employment data exacerbated the pair’s rally, as the country lost 1,800 positions in October, against the expected 15.9K creation. The unemployment rate remained steady at 5.5% as expected.

Data from the country released earlier in the week was generally disappointing, as the September Merchandise Trade deficit was larger-than-anticipated, down to $-0.98B. Also, the Ivey Purchasing Managers Index for October resulted at 48.2 seasonally adjusted, worse than the previous 48.7 and the expected 54.4, while Building Permits fell by 6.5%.

Crude oil prices weighed on the Loonie, ending the week with modest losses after reaching fresh six-week highs. Large builds in US stockpiles and news suggesting that the OPEC+ is not willing to cut production further, hurt the commodity.

Meanwhile, the market decided to return to the greenback, amid two main factors: hopes that the US and China will end up closing a deal, and upbeat American data that spooked the ghost of a recession in the world’s largest economy.

The Canadian macroeconomic calendar has little to offer next week, besides a BOC’s Poloz speech next Friday, although he's not particularly expected to refer to Canadian monetary policy.

The USD/CAD pair weekly chart shows that it's finishing the week above a flat 20 SMA, while the Momentum indicator remains directionless, consolidating around its 100 level, and as the RSI advances, also around its mid-line, leaving a neutral technical stance.

In the daily chart, however, the risk is skewed to the upside, with the price above its 100 DMA for the first time in almost a month, and technical indicators heading sharply up within positive levels.

The pair has an immediate resistance at around 1.3240, not far from the current level. Gains beyond it will likely end on a test of the 200 DMA, at around 1.3280. The next level to watch would be1.3356, October monthly high. 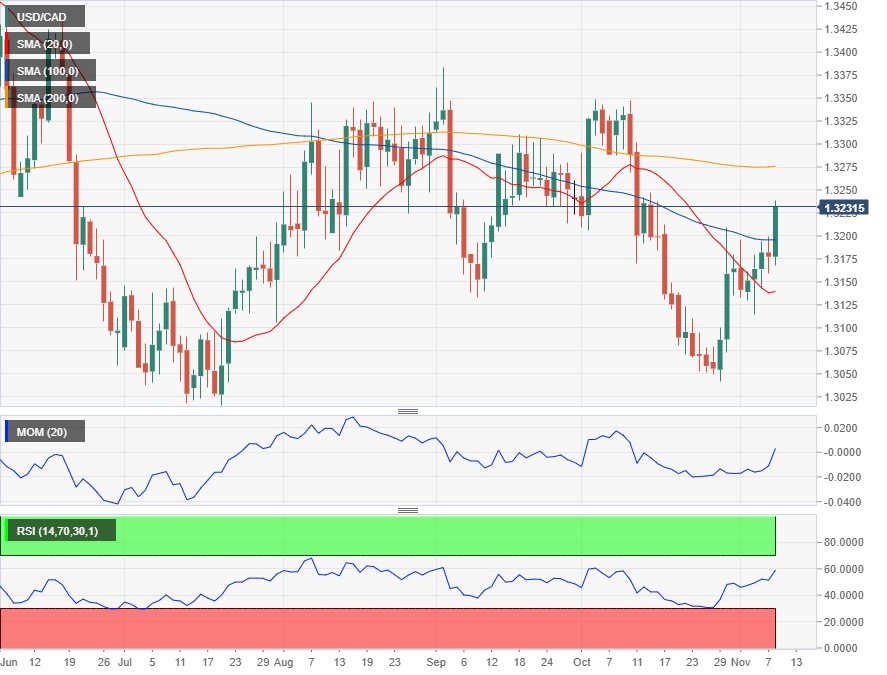 The pair is seen hovering just above the 1.3200 figure during the upcoming weeks, although sentiment seesaws. Neutral in the short term, bulls take over in the monthly view, while bears return quarterly basis. Nevertheless, there are no dominant trends in the three time-frame under study, as the numbers of bears and bulls are quite even throughout all periods.

The Overview chart, however, shows that moving averages are mostly skewed to the upside, with little directional momentum in the monthly view. Gains beyond 1.3400, however, are unlikely, according to polled experts.