The EUR/USD pair has resumed its decline after failing to surpass the 1.1180 price zone for a fourth consecutive week, ending this one at its lowest in almost a month. Financial markets spent these days following headlines related to the US-China trade relationship and chances of an upcoming deal.

Headlines were suggesting that both economies escalated their demands, others indicating that Trump and Xi Jinping would delay their meeting to December, and finally those reporting that both parts are planning to roll back tariffs in phases, once the deal is done. Overall, the idea that the trade deal is on the makes prevailed, despite headlines indicating that US President Trump has yet to decide on the levies rollback.

Data putting the US ahead of the EU

European data were generally encouraging, as the final versions of October Markit PMI were revised higher from preliminary estimates. Nevertheless, manufacturing output throughout the Union remained in contraction territory and barely above the multi-year lows posted at the beginning of Q3. Services indexes also improved, although the German’s PMI remained below 50 at the beginning of the last quarter.

Also, Industrial Production in the top one economy of the European Union plummeted in September, while the European Commission downgraded growth forecasts for this year and the next, offsetting the modest improvement in PMI.

The American dollar got a nice boost Tuesday following the release of the  US ISM Non-Manufacturing Index, which beat expectations by printing 54.7 in October, much better than the 53.5 expected and the 52.6 previous. This Friday, the preliminary estimate of the November Michigan Consumer Sentiment Index missed the market’s expectations by printing 95.7, anyway better than the previous 95.5.

Hopes about the US and China reaching a trade deal and overall positive US data sent Wall Street to all-time highs, which also boosted demand for the greenback.  For sure,  developments on the trade war between the US and China will continue to lead the way.

In the macroeconomic calendar this upcoming week, inflation and growth will take centre stage, as Germany,  the EU, and the US will release October CPI figures, while Germany and the EU will publish the preliminary estimates of Q3 Gross Domestic Product.

US Federal Reserve chief Powell will testify before the Congress next Wednesday, repeating it in front of a different commission on Thursday. Speculative interest will be looking for hints of the future of monetary policy, moreover now that chances of more rate cuts have decreased.

The EUR/USD pair is trading around the 50% retracement of its October rally, and the weekly chart indicates that it may well resume its decline in the upcoming days. The pair has finally moved well below its 20 SMA, while technical indicators faltered around their midlines, turning marginally lower although lacking strength enough.

In the daily chart, the pair is clearly bearish, having accelerated its slump below all of its moving averages, and with technical indicators approaching oversold territory with firmly bearish slopes. The 61.8% retracement of the October rally comes at 1.0995, making of the 1.1000 price zone, an even stronger static support. Once below it, the next relevant support comes at 1.0940, en route to the yearly low at 1.0878.  Resistances for these upcoming days are at 1.1100 and 1.1180. 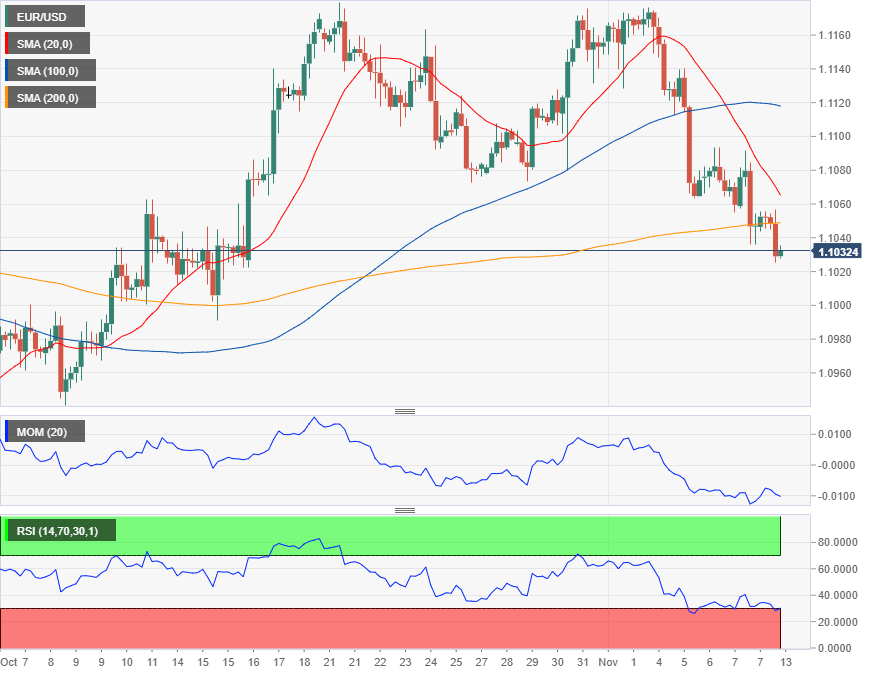 The FXStreet Forecast Poll suggests that the dollar will continue running next week, although gains are seen limited amid investors’ caution. In the case of the EUR/USD pair, 63% of the polled experts seen it falling with the pair seen flirting with the 1.1000 on average.

The number of bears decreases in the monthly and quarterly perspectives, although the pair is seen depressed, just a few pips above the 1.1000 figure.

The Overview chart offers quite a mixed picture, with the moving averages heading south with uneven strength. Most targets, in the longer-term perspective are seen accumulating below the 1.1000 figure, somehow suggesting that investors are more inclined to keep on selling.