The American dollar is heading into the release of the US monthly Nonfarm Payroll report with a firm pace, backed by robust US data release in the last few days. Not outrageously positive but above expected, the number highlights the better shape of the US economy, when compared to those of its major counterparts.

The US economy is expected to have added 160K new jobs in January, while the unemployment rate is foreseen stable at 3.5%. Average hourly earnings are expected to have bounced, forecasted to result at 0.3% MoM and 3.0% YoY.

Back in December, the economy added modest 145K new jobs, after a notable increase of 256K in November. Wages have ticked lower, but remained at the upper end of their latest range, while the unemployment rate hovers around a five-decade low. That said, the health of the US employment sector has not been an issue for long.

Ahead of the event, signs coming from what are considered leading indicators are mixed. There’s a pretty even number of positive and negative hints, although those considered positive are quite strong, lifting odds of an upbeat outcome.

The ADP survey showed that the US economy added 291K new jobs in January, the largest increase in the last  12 months. The University of Michigan Consumer Confidence index surged in the month to 99.8, close to its multi-year highs.

Also, The 4-week moving average for the jobless claims figure has been trending down for the last month, from 224k to a 211.75k average, although the continuing Jobless claims average is neutral for January.

Quite a disappointment, the Challenger Job Cuts report indicated that the number of corporate layoffs went up in the month, rising to 67.735K.

The most lagging indicator is the JOLTS Job Opening, which showed that jobs openings in November decreased from 7.36M to 6.8M.

The greenback retains its strength ahead of the release, which means that it would need little to maintain its bullish stance. Better than expected numbers will likely see it reaching fresh weekly highs, particularly against European currencies.

The EUR seems the one with more chances of collapsing, as it’s barely holding above 1.1000, while German data continue to suggest a deepening economic slowdown. Large stops are suspected below 1.0980, where the pair bottomed by the end of November. If those stops are triggered, the pair could approach the 1.0900 mark. 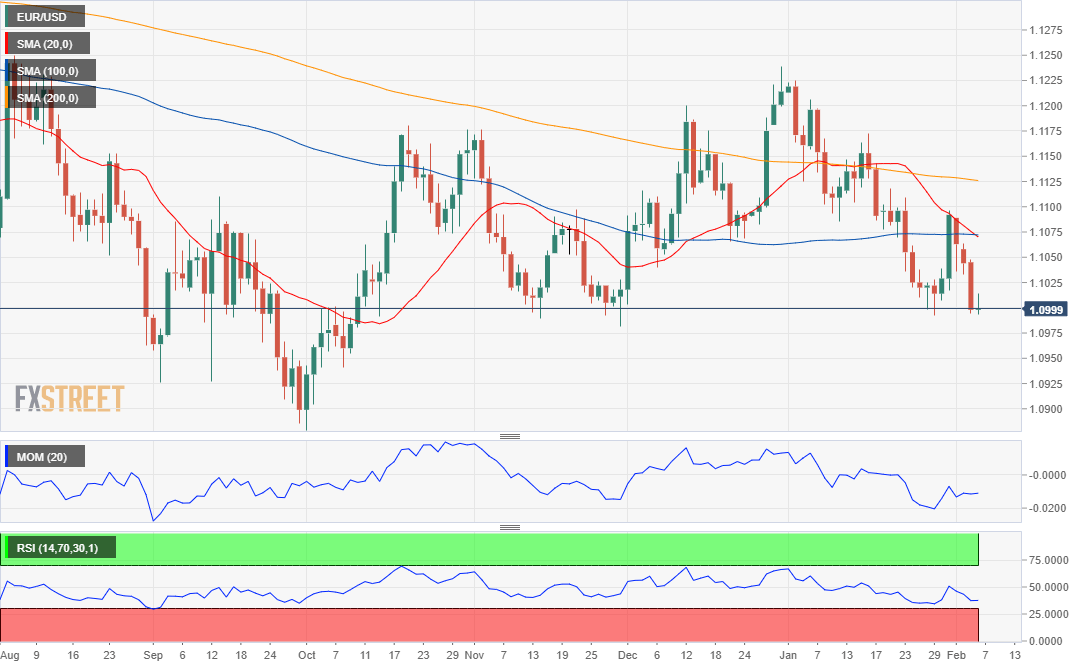 The Pound is in no better shape, although solid UK data is giving it some support. Nevertheless, concerns that the UK won’t be able to reach a deal with the EU before year-end weigh. Sterling is the most reluctant to react to US data, which means that the NFP report has to be quite upbeat to trigger a GBP/USD slump.

USD/JPY is another pair that can react sharply to the headline. The pair has been on the rise alongside Wall Street and Treasury yields. A strong employment report will fuel them all. Watch for an upward acceleration above 110.28, January monthly high.

Finally, the Aussie has found some support in rising equities, leaving AUD/USD trapped between a rock and a hard place: rallying Wall Street and a stronger dollar. A critical support level comes at 0.6670 a multi-year low. Below it, a steeper decline is to be expected.

Below expected numbers will be the perfect excuse to take some profits out of the table, although only if the headline comes below 100K, the dollar could be under some severe selling pressure.