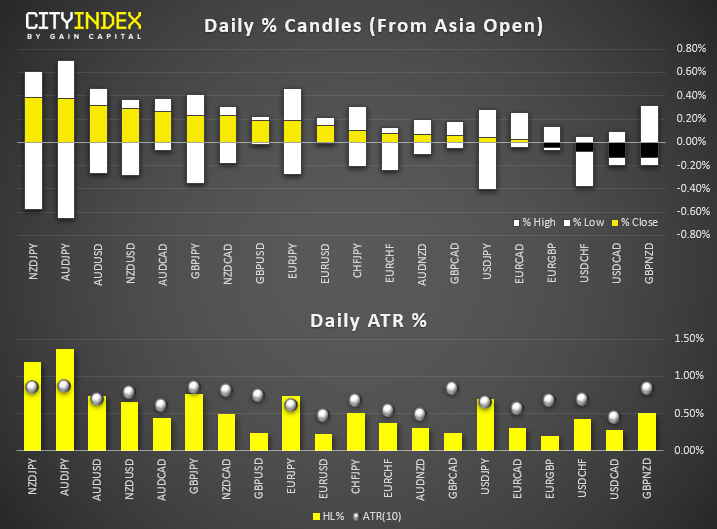 We saw a few whipsaws on price action today as contrasting headlines on trade talks rolled in. Rumours that China may leave this week’s trade talks early were recirculated in the South China Morning Post, which the US went on to deny (not sure why they’d know if true though…). And then reports surfaced that the US were going to suggest a currency pact with China, in which China are not to interfere with their currency (takes two to tango…) and the US were going to lighten restrictions on some US companies selling to Huawei.
Japan’s machinery orders, a measure for business investment, fell at its fastest rate since 2009 at -14.5% YoY. This only increases the odds of BOJ to ease at their next meeting.

A similar pattern has emerged with AUD and NZD taking the lead among FX majors, with JPY being the weakest currency. This has seen AUD/JPY an NZD/JPR far exceed their typical daily ranges, so momentum traders may want to look elsewhere for intraday trends and focus on pairs which have potential meat on the bone. 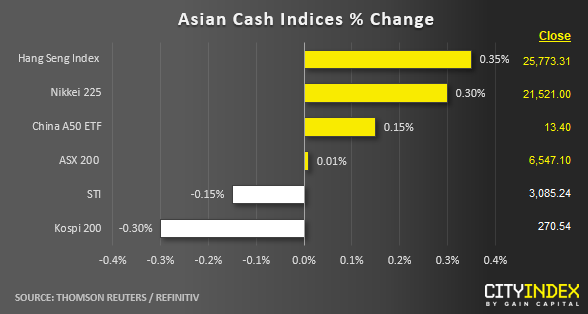 Mix performances seen in key Asian stock markets ahead of the high-level U.S-China trade talk that is set to kick-start today in Washington. Also, contrasting trade related headlines out in Asian session today do not offer any clear direction on how the talks will progress. On the positive side, it has been reported that U.S. administration is considering a currency pact with China that could lead to a partial deal. On the negative flipside, deputy-level talks among junior trade officials have shown no progress ahead of today’s key negotiation talk and the Chinese trade delegation may leave earlier today rather than stay for the scheduled two days of talks till Fri, 11 Oct.

South Korea’s Kospi 200 is the worst performer today which has recorded a loss of -0.30% to hit a month low of 266 as it resumed trading from yesterday’s holiday break

Cautious trading has continued to be seen in Hong Kong stock market as anti-government protestors have indicated to plan more protests today and over the weekend. Property related stocks have underperformed where Henderson Land, Hang Lung Properties and Sun Hung Kai Properties have dropped by -0.90% to -0.80%.

A slew of data from UK includes monthly GDP, manufacturing, industrial and construction output. Mark Carney is also speaking, although it’s about the new £20 note so we doubt it will be riveting. Unless we see surprisingly strong rebounds on the data front, Brexit headlines remain the dominant driver behind GBP moves.

US inflation data is expected to remain at 2.4%, well above the Fed’s 2% target. A slight miss below this figure increase the already high odds that they’ll cut next week (which is around 85% according to the CME FedWatch tool). 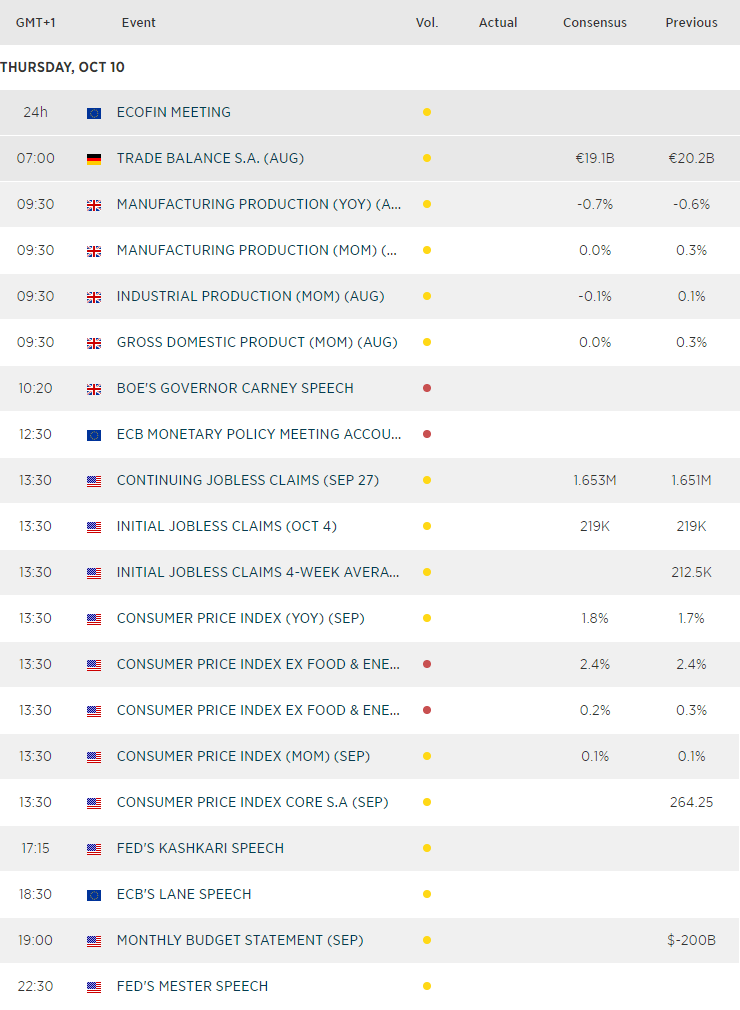