At what time does Janet Yellen speak?

The Federal Reserve is set to increase interest rates by another 25 basis points. However the market is fully prepared for this and it is unlikely to create much of a storm. Attention will turn to the tone of the FOMC statement and comments about the possibility of raising the rate one or two more times this year. 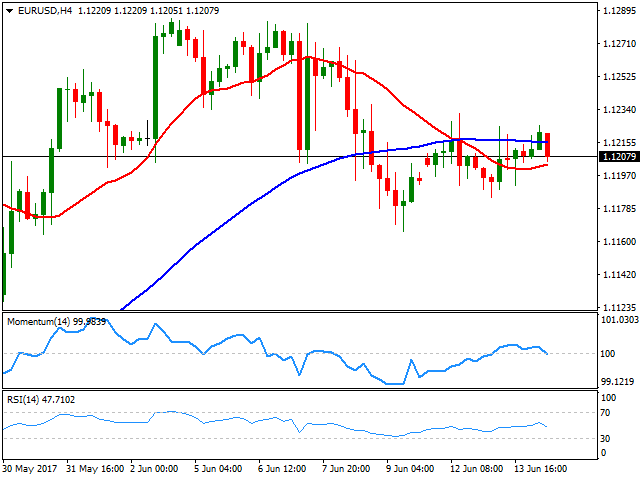 From a technical point of view, the EURUSD retains its bullish stance, given that in the weekly chart, the pair holds right below the 1.1300 figure, the high printed as an immediate reaction to Trump's victory last November. That's the immediate critical resistance, as over these past 4 weeks, large stops should have gathered above it, alongside with buying orders that if triggered, can send the pair close to 1.1460, a huge line in the sand, as weekly basis, the pair has been unable to settle above it since January 2015. In the daily chart, technical readings have become neutral, with indicators stuck around their midlines and the price right below a horizontal 20 SMA. A strong support comes at 1.1110/30, where the pair has met buying interest on slides, with a stronger one at 1.1075, the low set on April 18th. Only below there, the pair could be able to correct further lower, with the 1.1000/20 area as the first support, and followed by 1.0930, the 61.8% retracement of the November/March decline.

What did Janet Yellen say on previous events?

Press Conference with Chair of the FOMC

About the Federal Reserve System

The Federal Reserve System (Fed) is the central banking system of the United States and it has two main targets or reasons to be: one is to keep unemployment rate to their lowest possible levels and the other one, to keep inflation around 2%. Previous remarks from the Chair of the Board:

Fed Chair didn't comment on the monetary policy nor the present state of the U.S. economy in her speech at a Brown University event to commemorate "125 years of women at Brown.”

“The former has been benefiting USD against risk sensitive currencies, while the latter limited USD gains against EUR and JPY. With a limited data calendar today, we expect major USD crosses to remain range bound, with the focus shifting to Friday’s US retail sales and core CPI today.”

During a Q&A session with the audience at the University of Michigan, Fed's Chairwoman said that labor market is now at "normal" state. She also mentioned that it's hard to know QE effects, "likely helped keep inflation from falling more".

Fed independence "is under some threat" from congressional bills

Fed's Chairwoman warned about "some threats" to the central bank's independence coming from congressional bills. She also remarked on the importance of Fed's policy independence from political pressure.

Economy's growth potential is likely a bit below 2 pct

Fed's Chairwoman is crossing the wires, via Reuters, highlighting that US economy's growth potential is likely "a bit below 2%".

Additional headlines keep crossing the wires, via Reuters, from Fed Chairwoman Yellen at the University of Michigan, as she notes that an appropriate policy stance is closer to neutral now

Fed's Chairwoman is hitting the wires, via Reuters, stating that she expects U.S. economy to continue growing at moderate pace.

During a speech at the University of Michigan, Fed's Chairwoman Janet Yellen stated that U.S. economy is "pretty healthy" and highlighted that a financial system is essential for the economy.